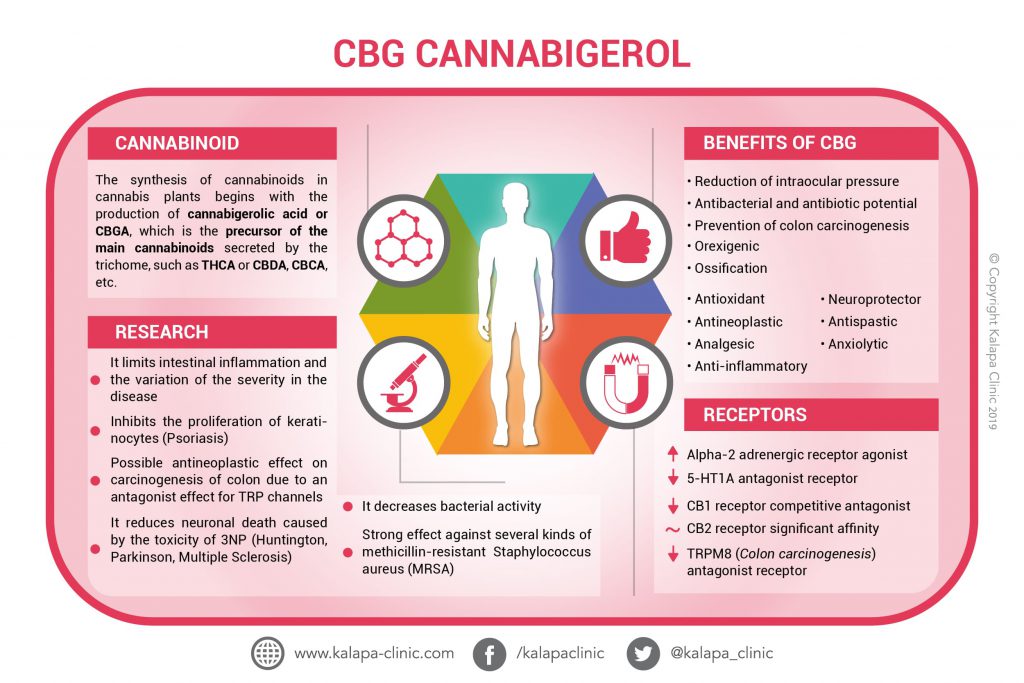 When talking about the medicinal properties of the cannabis plant, most people think of tetrahydrocannabinol (THC) and cannabidiol (CBD) first. But there are other cannabinoids with therapeutic benefits. Cannabigerol (CBG) is one of the 113 cannabinoids discovered so far – and it seems to have great potential. This is why the active substance is increasingly becoming the focus of research. Among other things, CBG is attributed with anti-inflammatory, anticancer and antibacterial properties.

Cannabigerol (CBG) is also pharmacologically interesting because it is not psychotropic – i.e. it does not produce the cannabis-typical intoxication commonly associated with THC – and is abundant in some industrial hemp varieties. Scientists at the University of Barcelona in Spain studied the properties of CBG in 2018. They found that the effect of the phytocannabinoid on the cannabinoid receptor 1 (CB1) is measurable. The results of the study suggest that CBG contributes to the regulation of endocannabinoid signal transduction. [1]

CBG: A weapon against antibiotic-resistant germs?

Antibiotic resistance is a global problem and threatens to undo past successes in the fight against disease. Antibiotics are used to treat serious bacterial infections. However, as soon as a new drug is on the market, it usually does not take long before the first resistances appear.

It has long been known that Cannabis sativa contains antibacterial cannabinoids. But the potential of the plant to fight antibiotic resistance has only been superficially investigated so far. A recent study from 2020 has therefore looked into this issue. The Canadian scientists conclude that cannabigerol can be effective against infections and stop multi-resistant pathogens. [2]

Perhaps the cannabinoid CBG could thus become a new weapon in the fight against so-called superbacteria. These multi-resistant germs are a threat to public health and have been a problem in hospitals for years. Many of these hospital infections are caused by MRSA (methicillin-resistant Staphylococcus aureus strains). Due to the reduced treatment options, severe infections, such as sepsis, are twice as likely to cause death in the case of multi-resistant pathogens as in the case of sepsis with susceptible bacterial strains.

In the study, the researchers tested five cannabinoids for their antibiotic properties. They found that cannabigerol is particularly effective in killing MRSA pathogens. Laboratory tests showed that CBG can also dissolve hard-to-slide “biofilms” of MRSA.

Mice cured of MRSA by CBG

After CBG was successful against bacteria in the laboratory, the researchers tested the cannabinoid’s ability to treat infections in animals. In a study on mice, CBG was found to be as effective as vancomycin in curing MRSA infections. This antibiotic is considered to be an effective alternative against multi-resistant staphylococci.

For the researchers, these results are “revealing the broad-spectrum therapeutic potential for cannabinoids.” [2] However, much more research is needed to find out whether CBG is safe to use as an antibiotic.

Cannabigerol and the protection of nerve cells

Parkinson’s disease, Huntington’s disease, and Alzheimer’s disease – these and other conditions are among neurodegenerative diseases. They result in a loss of function or the death of nerve cells. Inflammation and oxidative stress play a major role in this process. Italian researchers have found that various natural compounds from the cannabis plant, such as cannabigerol, can have neuroprotective effects against these inflammations and oxidative stress. They could thus protect against the loss of nerve cells. [3]

We can therefore be curious whether CBG will play a role in the future in the treatment of diseases such as Parkinson’s and Huntington’s disease. As early as 2015, scientists from Madrid had already achieved positive results in a study examining the effect of CBG on mice with Huntington’s disease. [4]

A study from Israel highlights the spectrum of effects of cannabis extracts on colon cancer cells and adenomatous polyps. The study showed that CBG in particular caused cell stagnation in colon cancer cells and activated programmed cell death. The researchers therefore explain that cannabigerol has a “potential future therapeutic value” in the treatment of colorectal cancer. [5]

It has long been known that cannabis stimulates the appetite. This is often attributed to the active ingredient THC. However, a study from the UK has shown that non-psychotropic CBG can also stimulate the appetite. In the trial with rats, they had larger and more frequent meals after treatment with the cannabinoid. The researchers did not observe any side effects. [7]

CBG should therefore be further researched, as its use in cachexia (severe weight loss) and loss of appetite may be of great interest.

Cannabigerol is an extremely interesting cannabinoid from a therapeutic point of view, because on the one hand it does not produce intoxication. It also has proven antibiotic properties and can even kill MRSA germs – so-called “super bacteria” (antibiotic resistance). This gives CBG great hope in the fight against multi-resistant pathogens and highly problematic hospital infections.

Not only that, but CBG has also achieved first positive results in studies for other diseases, such as colon cancer or neurodegenerative diseases like Parkinson’s, Huntington’s chorea, and Alzheimer’s. In addition, its appetite-enhancing properties are of medical interest. Furthermore, one study showed that CBG can inhibit aldose reductase activity. This means that CBG also has the potential to combat diabetic complications. [8]

More intensive research is essential to exploit and optimise the therapeutic potential of this cannabinoid. At the moment we are still at the very beginning of studying it.