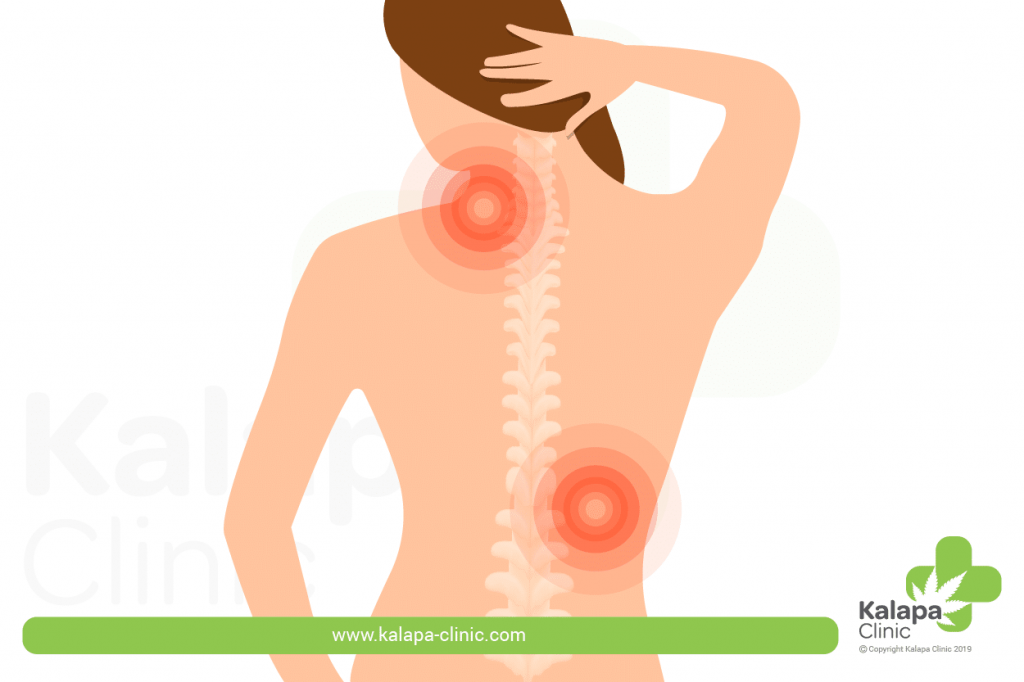 Fibromyalgia – this often means severe pain, exhaustion, sleep disorders and psychological suffering. The symptoms of chronic pain syndrome are varied and vary from patient to patient. Many of those affected have great difficulty in coping with their everyday life and their level of suffering is very high. As some studies have shown, the medical use of cannabis can have a beneficial effect on the disease.

Fibromyalgia – What is it?

Fibromyalgia syndrome (FMS) is characterised by muscle and connective tissue pain, which is particularly evident at certain pain points (tender points). Thus, the term fibromyalgia also means “fibre-muscle pain”. The pain can occur all over the body, but is usually felt near the joints. FMS belongs to the category of rheumatic diseases. In Germany, 2 percent of the population is affected by the chronic pain syndrome, and women are six to seven times more likely to suffer from it than men. [1]

Typical symptoms are chronic, diffuse pain that occurs in different regions of the body and at extremely sensitive tender points. These are particularly sensitive points at the transition from muscles to tendons. In the past, doctors also used these tender points as criteria for diagnosing fibromyalgia, but this is now outdated.

People with fibromyalgia also have other symptoms like sleep disorders, REM sleep disorders and problems falling asleep and sleeping through the night. There are also symptoms like exhaustion and daytime tiredness, and sometimes joint pain and muscle cramps. The patient may experience subjective discomfort in the form of tingling or burning sensations in the hands and feet. Some patients also experience a lack of concentration and forgetfulness.

The illness is often accompanied by a psychological disorder, such as depressive moods. 20 to 30 percent of patients suffer from depression. In addition, the pain syndrome can be accompanied by gastrointestinal complaints, an irritable bladder or restless legs syndrome.

Other fibromyalgia symptoms can also occur:

Before they are diagnosed with fibromyalgia syndrome, people usually have many visits to doctors and often suffer from various physical symptoms for several years. But first of all, an inflammatory rheumatic illness has to be ruled out as the cause. The doctor will do a full physical examination. The laboratory blood test shows no abnormalities in fibromyalgia. Imaging diagnostics, such as ultrasound or MRT, do not produce any results either.

In the case of generalised pain that has lasted for more than three months, and when other diseases are ruled out, doctors diagnose fibromyalgia or somatoform pain disorder. By somatoform disorder, doctors mean pain for which no physical cause can be identified and which is often associated with severe psychosocial or emotional stress. The clinical pictures of FMS and somatoform pain disorder are often equated.

Therapy: What helps against fibromyalgia?

Fibromyalgia syndrome is a benign but chronic disease. For many people, dealing with this diagnosis is not easy. Therefore, patient training and patient support groups are an important part of the therapy. Those affected can find information on this through the Fibromyalgia Action UK charity and the American National Fibromyalgia and Chronic Pain Association.

In addition, patients should regularly take part in light sports such as Nordic walking or swimming. Relaxation exercises such as autogenic training or gymnastics are also recommended. Stress reduction and physical activity are an important step in increasing general well-being and quality of life. Physiotherapy or physical therapy with heat can also alleviate the symptoms. Exercising in warm water causes particularly well effects.

Psychotherapy is helpful for many patients. Cognitive behavioural therapy (CBT) in particular is used to treat various chronic pain disorders and sleep disorders.

The use of drugs is difficult because classic painkillers are rarely helpful in fibromyalgia syndrome. Especially those used in rheumatic therapy very often have side effects and should only be used in exceptional cases. If your doctor prescribes medication, these might be antidepressants like amitriptyline or serotonin reuptake inhibitors (SSRIs). Anticonvulsants can also be used. [2]

Recent studies show that cannabinoids might be a useful treatment option for patients with fibromyalgia. For example, researchers from the Clinical Cannabis Research Institute in Israel have analysed data from fibromyalgia patients between 2015 and 2017 in a prospective observational study. The result: 81 percent of the study participants noticed a positive effect from cannabinoid therapy. [3]

The average pain intensity of the participating patients before treatment was 9 (on the pain scale from 1 to 10). By the end of the observation period, this value had dropped to 5. The most common side effects were mild, especially dizziness, dry mouth, and gastrointestinal problems.

Participants were given cannabis drugs in different compositions. They took cannabidiol (CBD) and delta-9-tetrahydrocannabinol (THC) in the form of cannabis flowers and/or oil. The CBD and THC content of the medication also varied from person to person.

The authors of the study conclude that “medicinal cannabis can be an effective and safe treatment for fibromyalgia (…)”. Furthermore, the data indicates that “especially for those where standard pharmacological therapies have failed”, medicinal cannabis may be a promising therapeutic option. [3]

An older study from 2016 already suggested that nabilone might have a better effect on sleep in FMS than amitriptyline. But there were no significant differences between the two drugs for the symptoms of pain and upset. [4]

Cannabis therapy: Half of the patients can do without other medicines

Also very interesting is a recent study from 2020, in which Israeli scientists interviewed 101 cannabis patients suffering from FMS. They found that treatment with cannabis-based drugs enabled almost half of the patients (47%) in avoiding any other therapy. Slightly more than half (51%) reduced the dose or the number of other drugs used to treat their symptoms. Only one patient discontinued treatment. [5]

The average improvement in sleep and pain was just over 77 percent. Other symptoms improved less, but more than half of the people interviewed said that cannabis therapy made them spend more time outdoors. The authors of the study concluded that medical cannabis was “an effective treatment for fibromyalgia”. Almost a quarter of the patients reported mild adverse effects. However, these did not lead to discontinuation of the treatment.

Cannabis with a high content of tetrahydrocannabinol (THC) shows good results in treating the pain caused by FMS, but cannabidiol (CBD) does not provide any relief for patients. This is the finding of a 2019 fibromyalgia study by the Leiden University Medical Center (LUMC) in the Netherlands [6].

The study was conducted by LUMC in collaboration with Bedrocan, a producer of medical cannabis flowers. The research was a randomised, placebo-controlled study that investigated the analgesic effect of cannabis flowers through inhalation in 20 fibromyalgia patients with chronic pain. Three different cannabis varieties with known THC/CBD ratios were used. A placebo without THC and CBD was also used.

The two groups that received cannabis flowers with high THC content felt significantly less pain during the tests than the other patients. They were taking a drug with a lot of CBD and little THC or no cannabis at all.

Fibromyalgia patients: Cannabis use against symptoms and complaints

Very positive results were already obtained in 2018 by scientists from Israel who conducted a survey of cannabis users suffering from fibromyalgia. The researchers sent an internet-based questionnaire to three large fibromyalgia Facebook groups in Israel. The results of the survey showed that cannabis use had a beneficial effect on the patients’ symptoms of pain and sleep problems. Few reported adverse effects or feelings of dependence on cannabis.

For 94 percent of the people who took part in the survey, cannabis use brought relief from pain and for 93 percent improved sleep quality. In addition, the respondents reported positive effects on their psychological disorders. For example, 87 percent felt that the symptom of depression improved and 62 percent felt that existing anxiety states were reduced. [7]

Recent studies show that treatment with cannabis-based drugs can relieve the pain caused by fibromyalgia. However, more research is needed here too. For example, future trials should aim to compare medical cannabis with the standard treatment for fibromyalgia, so that the right place of cannabinoids in the therapy can be determined.

THC in particular seems to have a special role in the treatment of fibromyalgia symptoms. It is therefore worth investigating how THC works in the long-term therapy of the disease. Of particular interest here is the question of whether fibromyalgia patients can reduce other medications with THC. The effect of cannabis therapy on the other symptoms of fibromyalgia, apart from chronic pain, also needs to be researched.