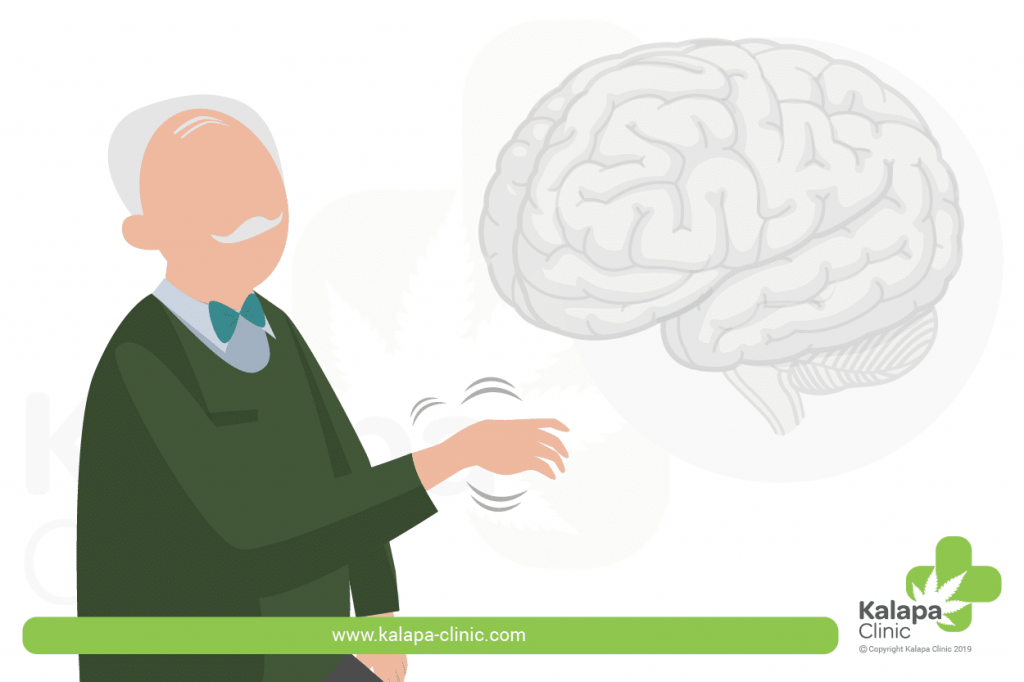 Parkinson’s disease (idiopathic Parkinson syndrome) is the second most common neurodegenerative disease after Alzheimer’s disease. According to the German Parkinson Association, approximately 1% of people over 60 years of age in Germany are affected. However, the onset of the disease is usually preceded by decades of changes in the body. The risk of contracting the disease is estimated to be 2% for men and 1.3% for women.

So far, there is no cure for Parkinson’s disease. Medical treatment options are also limited. They serve to alleviate symptoms and to improve the quality of life of those affected. Various studies, and also experience reports of patients, show that the use of medical cannabis can be a complementary therapy option.

The neurological disease owes its name to the English physician James Parkinson, who in 1817 called it “Shaking Palsy” (shaking paralysis), although it is rather a progressive impoverishment of movement.

At the beginning of the disease, unclear symptoms appear which resemble a rheumatic disease. The first signs include unilateral muscle tension in the shoulder-arm region, digestive disorders, sudden sweating or fatigue. Sleep disturbances or a restless sleep with sleeping-talking or rowing with the arms can also be first signs.

These symptoms increase as the disease progresses. In particular, fine motor activities, such as buttoning up a piece of clothing, become problematic. In addition, those affected find it more difficult to coordinate movements and postural instability (lack of stability of the upright body posture) occurs.

In the advanced stage further symptoms are added:

In the late stages, Parkinson’s patients are so restricted that they need a wheelchair to move around. In the final stage of Parkinson’s disease, neither swallowing nor speaking is possible.

Causes are not clarified

Parkinson’s disease: What forms are there?

In addition to Parkinson’s disease, there are other forms of neurological disease:

Parkinson’s patients show only unclear symptoms in the early stages, which makes diagnosis difficult. First indications can be given by imaging procedures such as positron emission tomography and a levodopa test (L-dopa test). Often, however, Parkinson’s disease is not diagnosed until a later stage of the disease.

Basically, the choice of medication depends on various factors such as age, the severity of symptoms and the severity of accompanying disorders. The problem with L-dopa therapy is that it is well tolerated in the first years of the disease, but cannot prevent the disease from progressing. Over time, the duration of the effect decreases and serious side effects such as cardiovascular disorders, extreme fatigue, stomach problems and psychological disorders can occur.

Various studies have shown that cannabis for medical purposes can alleviate motor disorders and non-motor disorders such as restlessness, tremor, sleep disturbances or anxiety that occur in the context of Parkinson’s disease. This is because cannabinoids from the cannabis plant, such as tetrahydrocannabinol (THC) and cannabidiol (CBD), activate the CB1 receptors and CB2 receptors in the endocannabinoid system. Since the cannabinoid receptors also occur in the brain, the cannabinoids can exert their effect on the cell complex that is involved, among other things, in the regulation of motor skills.

Use of cannabis as medicine for dyskinesia

Various studies have already shown that medical cannabis can relieve dyskinesia, such as those conducted by researchers at the University of Manchester. Here the synthetic cannabinoid nabilone has been shown to reduce dyskinesia in Parkinson’s disease (2). Nabilone mimics THC and acts as a CB1 agonist.

Italian researchers at the University of Foggia came to the same conclusion and stated that medicinal cannabis could help to alleviate dyskinesias (3).

Australian researchers from the University of Technology Sydney published the results of their interesting study in 2019, in which they tested the cannabis substitute HU-308 in mice with Parkinson’s disease (4). This was just as effective as the active substance amantadine, a drug used to treat dyskinesia in the context of Parkinson’s disease. The simultaneous administration of amantadine and the cannabis substitute also proved to be effective. However, clinical studies on this are still lacking.

In recent years there has been an increasing medical interest in the therapeutic effects of the non-psychoactive cannabinoid cannabidiol (CBD). Various studies have shown that CBD can reduce symptoms such as restlessness, tremors, sleep disorders and anxiety. This cannabinoid can therefore also be used in the treatment of Parkinson’s disease.

Brazilian researchers at the University of Sao Paulo divided 21 patients into three groups. The first group took 75 milligrams of CBD every day, the second 300 milligrams and the third group received a placebo. Here a positive effect was shown and the quality of life of the patients improved. However, the researchers also emphasized that further research was needed (5).

The researchers also investigated the effects on REM sleep behavior disorder (RBD) in patients with Parkinson’s disease. Drug therapy with CBD reduced these Parkinson’s symptoms in the patients (6).

It is also interesting to note that cannabidiol has also been shown to have a presumed antipsychotic effect. This is because many patients in advanced stages of Parkinson’s disease display psychotic behaviour. The Brazilian researchers selected two women and four men with Parkinson’s syndrome who suffered from psychosis for a study (7).

Over a period of three months, the researchers administered a daily dose of 150 milligrams of CBD medication to the patients in addition to the other drugs. This was followed by evaluation using a psychiatric evaluation scale and the Parkinson’s disease psychosis questionnaire. A significant reduction in psychotic symptoms was shown under treatment.

With regard to motor symptoms, the preclinical studies are promising. However, the few studies with patients who were administered CBD did not show any improvement of these symptoms. However, previous research suggests that CBD may play a preventive rather than a therapeutic role in Parkinson’s disease (7).

The disease is often diagnosed after the first motor symptoms appear. By then, about 60% of the dopaminergic neurons may have died. The contradictory study results could be explained by the fact that CBD has only been administered in clinical trials at an advanced stage.

Unfortunately, the early diagnosis of the disease remains a major challenge, which makes the implementation of prevention strategies considerably more difficult. Presumably, the development of diagnostic criteria to detect the disease at an early stage could expand the application possibilities of CBD.

The molecular mechanisms associated with the improvement of motor disorders through CBD treatment may be diverse. There is evidence that this may depend on CBD effects on the 5-HT1A, CB1, CB2 and/or PPARγ receptors.

In addition, all movement disorders are always associated with oxidative stress and inflammation. Studies suggest that the non-psychoactive cannabinoid may have antioxidant and anti-inflammatory effects, both in vitro and in animal models of movement disorders.

Medical cannabis and also pure cannabidiol can relieve various ailments such as restlessness, anxiety, sleep disorders and tremors. The cannabinoid THC also seems to be able to reduce the involuntary movements (dyskinesias) that occur in Parkinson’s disease. CBD has also shown promise in preclinical studies. In clinical studies on patients, however, CBD did not show any improvement in symptoms.