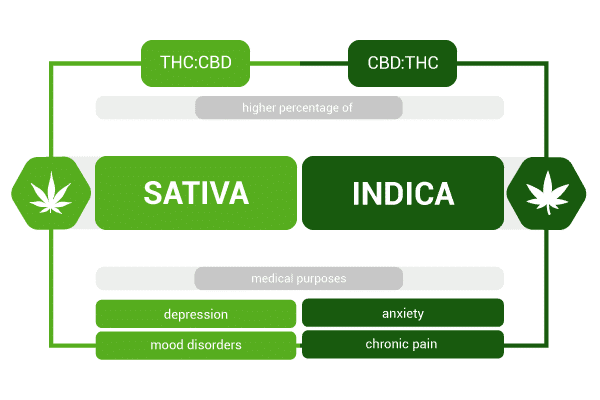 Cannabis is divided in to two subspecies, Cannabis Indica and Cannabis Sativa. These subspecies can be recognised by their physical differences but over time this classification has also helped people categorize the different effects that come from ingesting the plant. For example, it is said that Indica will create a “body high” and Sativa will leave you feeling more energetic and creative. There are many differences between these two types of cannabis, i.e the physical differences, however, it has come to light that assuming the effect cannabis has based on whether it is labelled as Indica or Sativa is useless, as well as scientifically inaccurate. The effect of the plant depends on so much more than just its name, for example, where was it grown, how much light did it receive and what is the chemical compound of the strain? In a recent interview Dr Ethan Russo, the medical director of PHYTECS, said “One cannot in any way currently guess the biochemical content of a given Cannabis plant based on its height, branching, or leaf morphology” (Piomelli and Russo, 2018).

When researching different strains of Cannabis you are presented with an increasingly overwhelming amount of information. Cannabis emerged as a plant with many unique and powerful medicinal properties and for millennia it has been documented as a medicine with one of its’ first recorded uses being as an anti-inflammatory. However, it could be argued that it’s true potential was only really realised after the discovery of the endocannabinoid system (ECS).

This system acts as a bridge between our body and our minds and seems to be fundamental in human health. Our bodies naturally produce endocannabinoids that interact with the same cannabinoid receptors as tetrahydrocannabinol and cannabidiol (two of the most prominent and better understood compounds found in the cannabis plant, THC and CBD respectively). When it comes to using cannabis for medicinal purposes one of the most important things to look at is the balance of these cannabinoids.

It would be great if we could separate this plant and its effects into two easy-to-understand categories, however, it is not that simple. The table below highlights a few of the known physical differences between these two subspecies.

So far it has been suggested that Indica dominant strains of cannabis will contain a higher ratio of CBD:THC while Sativa dominant strains contain a higher ratio of THC:CBD (Atakan, 2012). For medical purposes it could then be said that if you are suffering from anxiety or chronic pain then Indica is for you and if you are looking to treat depression or a mood disorder then Sativa is what you need. This would be correct if any producer of medical cannabis could guarantee that each batch, of every single strain, had been grown in the exact same conditions every time, however, unfortunately this is not the case.

In the same interview mentioned in the introduction, Dr. Russo suggests that a new classification system should be put to use, one that differentiates between not only the dominance of each cannabinoid, i.e. if the strain is THC dominant or CBD dominant, but also the entire chemical profile of the strain. It should be studied and attached to each plant, both for medicinal and recreational users. This would definitely help patients who are seeking specific ratios of different compounds, however, the best way to know for sure is by taking each component separately.

The most effective way to achieve that is by taking the compounds, like THC, in an oil form. The chemical compounds are individually extracted, meaning specific doses can be taken. Most cannabis oil producers will also test their finished product via high-performance liquid chromatography (HPLC). This process is used to breakdown, identify and measure each component within a mixture. Through this technique it is possible to see which, and how much of each cannabinoid is within the plant. HPLC is, or should be, used by all producers of medical oils as it allows the producer to create oils of different strengths and to be sure of what exactly is in their product. When using cannabis for medicinal purposes, this is paramount as without this information the results of this kind of treatment would vary. Regardless of the name of the strain it is incredibly important that these analytics are known in order for you to get the best therapeutic effect from the plant.