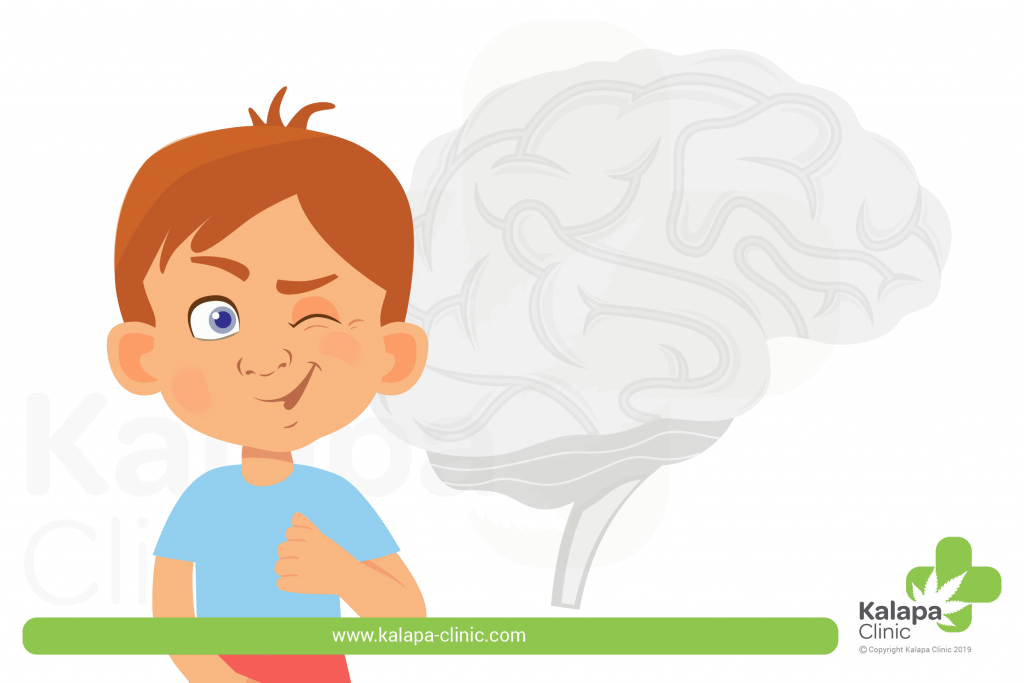 People with Tourette’s syndrome cannot control the symptoms (tics) of their condition, so they might say obscene words, make grimaces or blink wildly. The level of suffering is usually very high. There is still no adequate treatment available today. At best, the symptoms can be relieved somewhat. However, treatment with medical cannabis can be an alternative therapy option. The trials are very promising.

Tourette’s syndrome: what exactly is it?

In 1885, the French physician Georges Gille de la Tourette described for the first time the neuropsychiatric disease “Gilles de la Tourette syndrome”, in which patients suffer from the so-called tics. A distinction must be made between a vocal tic (sudden sound) and a motor tic (involuntary movement). If there are several motor tics and at least one vocal tic, this is an indication of Tourette’s syndrome.

In addition to the distinction between vocal and motor tics, tics are also divided into simple and complex tics. Simple tics usually involve individual muscle groups (e.g. blinking, twitching, grunting) and complex tics involve several muscle groups (e.g. obscene gestures, echolalia, hopping). The frequency and strength of these can vary. If, for example, stress factors or joy are added, the symptoms usually become stronger. On the other hand, the symptoms usually decrease slightly when concentration is high.

In addition, many people with Tourette’s also can develop attention deficit hyperactivity disorder (ADHD) or suffer from depression, anxiety or obsessive-compulsive disorder.

About 4 to 12 out of every 100 children develop various tics from the age of 6. These usually disappear of their own accord after some time. Only one child in 100 develops a chronic tic disorder (Tourette’s syndrome).

Classification into levels of severity

The severity of Tourette’s Syndrome (TS) can be determined using a severity scale (TSSS):

The causes are unclear. However, it is known that a genetic predisposition could play a role. This is because the risk of developing Tourette’s is about 100 times higher for children if the syndrome has already occurred once in the family.

Researchers also think that another possible explanation is the neurotransmitter metabolism in the brain, which can be disturbed in people with Tourette’s disease. The neurotransmitter dopamine is responsible for sending information to the brain. Research has shown that Tourette’s patients have a high number of dopamine receptors.

The serotonin, norepinephrine, glutamine and opioid balance also seems to be disturbed in people with Tourette’s disease. The disorder manifests itself mainly in the basal ganglia. These are areas of the brain that are located in both hemispheres and are responsible for regulating impulses and actions. If a disorder occurs here, this could be a possible cause.

There is no cure for the disease so far. Therefore, the goals of therapy are to relieve the symptoms and help patients to cope better with the disease. Behavioural therapy, psychotherapy, participation in a self-help group or learning relaxation techniques could be helpful here.

As part of drug therapy, doctors often prescribe antipsychotics or neuroleptics, such as aripiprazole, tiapride or risperidone. However, the effectiveness of these drugs is limited in Tourette’s syndrome. The tics still happen, but in the best case, the frequency can be reduced. Another problem is that antipsychotics can have serious side effects

Therapy with cannabis as medicine

Several studies suggest that TS patients can benefit from cannabis-based drugs and that the severity and frequency of tics can be reduced. The mechanism responsible for this is not yet completely understood. However, researchers believe that the endocannabinoid system, with its cannabinoid receptors that can also be detected in the brain and can be activated by cannabinoids in the cannabis plant, plays an important role.

Of interest is a German study led by Dr. Kirsten Müller-Vahl from 2017 on two treatment-resistant TS patients. (1) One patient received therapy with medicinal cannabis flowers (0.1 grams daily) and the other received the oily THC solution dronabinol (22.4 to 33.6 milligrams daily). Both subsequently reported a significant improvement in tic symptoms.

In 2016, New Zealand researchers reported on a person who was treated twice a day with Sativex oral spray (10.8 milligrams THC/10 milligrams CBD). (3) This also had a positive effect on the symptoms.

In a clinical trial conducted by the University of Toronto in 2017, the researchers evaluated the effectiveness of cannabis in 19 people. (4) They observed that the tics in the test subjects decreased by about 60 percent. They also found that 18 out of 19 people said that cannabis was well tolerated for medical purposes.

Those affected often suffer from sleep disorders. During the REM sleep phase, the tic frequency can even increase. (5) Several studies suggest that cannabinoids might have a positive effect on REM sleep. (6) This means that treatment with cannabis-based drugs could be beneficial for people who have REM sleep problems. Sleeping pills or tranquillisers, on the other hand, carry the risk of serious adverse effects.

People with Tourette’s syndrome have a high level of suffering, which can severely limit their quality of life. Adequate treatment with medication does not exist. In most cases, the symptoms can only be marginally relieved with the drugs available.

However, cannabinoids such as tetrahydrocannabinol (THC) and cannabidiol (CBD) have the potential not only to improve the symptoms of the disorder, but also to restore some of the quality of life to those affected without being burdened by severe side effects.