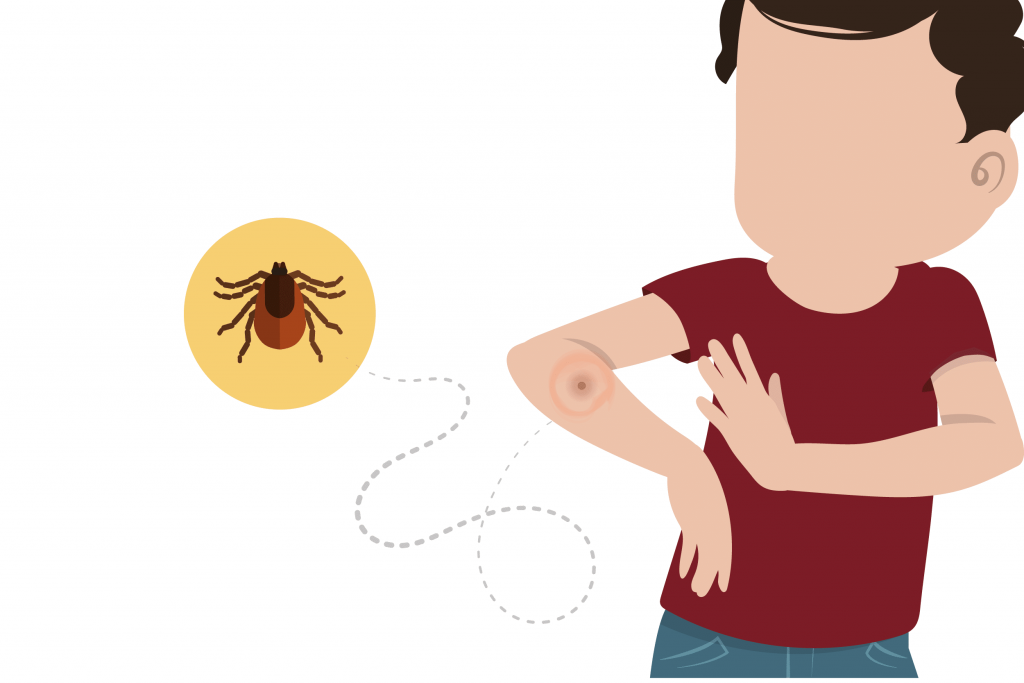 Lyme Borreliosis, better known as Lyme disease, is a bacterial infection that can be transmitted to humans by a tick bite.  This infection can cause multiple symptoms and it is described in three phases[1].

During the first phase, which begins 3 to 30 days after the tick bite, there is an annular red lesion with an active edge that extends centrifugally, while the centre clears, around the wound. This process is called the migrant erythema and symptoms include lymphadenopathy, fever, headache and arthralgia.

Without adequate antibiotic therapy, the second phase can be expressed between a few weeks and a few months after inoculation. This stage corresponds to a spread of the infection. The manifestations are joint disorders (arthritis), cardiac disorders, neuro-meningeal disorders (sensitive meningoradiculitis, peripheral motor impairment, Cranial Nerve Disease, ophthalmological disorders (uveitis, conjunctivitis, etc.), or a purple red nodule (benign skin lymphocytoma) in the face, ear, breast areola, or scrotum.

Cannabinoids can be considered a treatment option. Despite the fact that medical cannabis is not a cure for Lyme disease, it is a way to improve the patient’s quality of life. Headaches, arthritis and chronic pain have shown positive effects among cannabis users, according to numerous studies[2].

Dermatological uses of medical cannabis, as claimed by dispensaries in Canada, the United States and Europe, included Lyme disease. Further research is needed to validate the indications, efficacy and safety of medical cannabis[3].

Finally, the scientific community recognizes that cannabidiol (CBD), one of the most well-known cannabinoids in the cannabis plant, is responsible for the anti-inflammatory, neuroprotective and analgesic properties, without any psychoactive effect. CBD is therefore considered to be the ideal natural alternative to traditional medicines for certain diseases like Lyme disease.