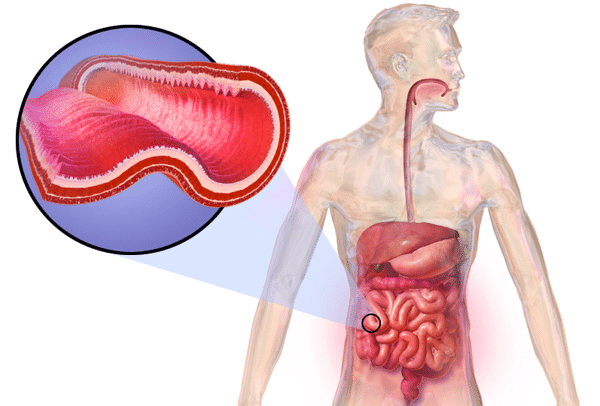 Crohn’s disease is a pathology that causes inflammations in parts of the digestive tract. It is a chronic and incurable condition, people who suffer from this disease may experience phases of severe symptoms, followed by periods of remission that can last for weeks, months or even years.

The symptoms of Crohn’s disease will differ from person to person as they depend on the severity of the condition and the location of the inflammation in the bowel, but in general the disease includes the following symptoms:

In some more severe cases, inflammation and constipation in areas of the gastrointestinal tract can lead to problems such as intestinal perforation, abdominal stretching (swelling), intense pains and fevers.

A study in 2012 examined 13 patients diagnosed with Crohn’s disease who received a three month course of treatment using medical cannabis. The results that occurred were promising as the data had shown that the patients were improving. By inhaling cannabis over the course of three months it can help to improve the quality of life of people with Crohn’s disease, decreases disease activity and can cause weight gain and increase BMI.
Only a year later, a group of Israeli researchers conducted a trial with 21 patients to analyse the anti-inflammatory effects of cannabis. All patients diagnosed with Crohn’s disease, had severe symptoms which had not been improved with any other treatments. 11 of them were given medical cannabis twice a day while the rest of the patients received a placebo.

After eight weeks, 5 out of the 11 patients who had been treating their Crohn’s disease with cannabis has experienced complete remission, and a response was generated in 90% of cases. Meanwhile among those that had taken the placebo only 40% of cases saw any type of response, and only one case of remission occurred. This study has shown that cannabis can help to treat Crohn’s disease.

The cannabinoid from this cannabinoid treatment that is able to help Crohn’s disease sufferers is called CBD. When cannabidiol is connected to the body’s cannabinoid receptors, it helps to relieve pain and discomfort. It also reduces inflammation and increases appetite. This combination provides positive and long-lasting effects when treating Crohn’s disease.