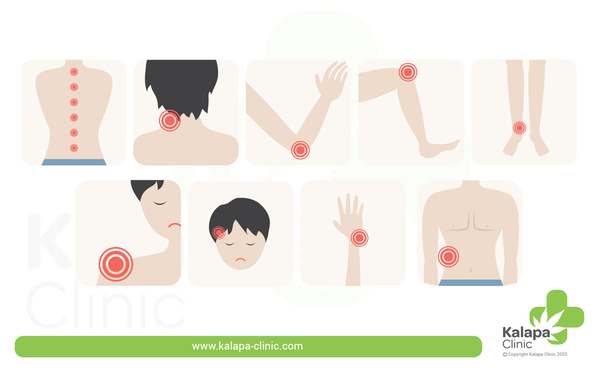 About a quarter of people in Germany suffer from chronic pain. Non-drug and drug pain therapy may not be sufficient in some cases to achieve effective pain relief. Effective complementary measures such as medical cannabis therapy are then required.

Since the knowledge on the use of cannabis for medical purposes has been improved in recent years by a large number of clinical studies, the administration of cannabis-containing medicines can be useful for patients who do not experience sufficient pain relief under standard therapy. Before we delve deeper into this topic, however, we will briefly explain what forms of pain there are and what therapeutic options are available.

What are the different types of pain?

The International Association for the Study of Pain (IASP) defines pain as “an unpleasant sensory and emotional experience associated with actual or potential tissue damage or described in terms of such damage”.

Pain medicine distinguishes between the following types of pain, among others:

More information on the different forms of pain can be found here.

What is the difference between acute and chronic pain?

Acute pain occurs, for example, during an injury and is a warning signal from the body. Normally, it is limited to the place where it originates. When the cause has been eliminated, for example when the injury has healed, the pain disappears by itself.

With chronic pain, the function as a warning signal is lost. This means that the pain symptoms persist despite the healed cause. Doctors speak of chronic pain when it has persisted for at least three months and significantly impairs the patient’s quality of life. The former pain symptoms then develop into a separate disease.

Since chronic pain syndrome is a complex disease, treatment is often not easy. A multimodal therapy, i.e. a combination of different non-drug therapies that are individually adapted to the patient, promises the greatest success. This can include the following treatment methods, for example:

In addition to the previously mentioned therapy methods, medications are also used for chronic pain syndrome. For short-term use, patients are often given classic painkillers, such as paracetamol, acetylsalicylic acid (ASA), naproxen, ibuprofen or diclofenac. Since these drugs can affect the gastrointestinal mucosa and blood pressure, long-term use should be carefully considered.

If patients suffer from neuropathic pain, doctors often prescribe anticonvulsant drugs such as lamotrigine, topiramate or gabapentin. Although these are mainly used in the treatment of epilepsy, it is known that the active substances can positively influence certain pain processes in the body. Topiramate, for example, is used for migraine prophylaxis. However, these drugs are not free of side effects; symptoms such as ataxia, fatigue and dizziness can occur.

In the context of pain therapy, many doctors also prescribe antidepressants (tricyclic antidepressants such as amitriptyline or serotonin and noradrenaline reuptake inhibitors), as they can positively influence pain processing in low doses.

For very severe chronic pain, doctors prescribe opioids. These are divided into weaker-acting and strong-acting drugs. The former include painkillers like tilidine or dihydrocodeine. Stronger-acting drugs are fentanyl, buprenorphine and oxycodone.

Opioids can cause unwanted side effects such as nausea, vomiting, dry mouth, constipation, loss of appetite, headaches as well as psychiatric disorders. In order to alleviate these symptoms, those affected are then usually given further medication.

In addition, there is an increased risk of dependence with opioids. In addition, patients build up an opioid tolerance relatively quickly, so that the dose has to be increased more and more to achieve a sufficient effect.

Mechanism of action of medicinal cannabis for pain

For example, when an injury occurs, the body produces the messenger substance prostaglandin, which is produced by the enzyme cyclooxygenase (COX). The prostaglandin then binds to the pain receptors so that the brain perceives the pain. Classical drugs (non-opioid painkillers such as ibuprofen) block the COX enzyme. As a result, the prostaglandin is no longer produced.

Cannabinoids also act in the spinal cord. However, opioids paralyse the entire pain transmission, whereas cannabinoids “only” slow down the transmission of pain.

Before a pain impulse reaches consciousness, the spinal cord can weaken or intensify it. This effect is called gate control. Various studies have shown that cannabinoids are able to change the gate control or weaken the pain impulse (1).

Cannabinoids influence the perception of pain

Various studies suggest that cannabinoids do not reduce pain intensity but make the discomfort more bearable. For example, researcher Martin De Vita of Syracuse University in the US stated in his meta-study that THC in particular was associated with moderate increases in pain tolerance and pain threshold (3). There was no reduction in pain intensity shown. However, pain was perceived as less unpleasant.

He further explained that the present study had focused on the use of THC. It was unclear whether other cannabinoids would lead to different results.

Cannabis as medicine is particularly effective for neuropathic pain

Medical cannabis shows a positive effect especially in chronic neuropathic pain and pain in the context of multiple sclerosis (4). In a parallel group study involving 50 patients with HIV-associated neuropathic pain, it was shown that pain symptoms were significantly reduced after smoking cannabis.

The same result was obtained in a cross-over study in which patients received dronabinol for MS-related pain. In addition, smaller controlled studies showed that medical cannabis can also be effective for chronic pain of other causes such as fibromyalgia, rheumatism and tumour pain.

Chronic pain symptomatology is one of the well-established healing indications of medicinal cannabis. Various placebo-controlled studies have already been able to prove the corresponding effect.

Non-opioid drugs as well as opioids in particular can cause severe side effects. Studies suggest that the combination of pharmaceuticals and cannabis-based medicines can not only mitigate the side effects, but that it is possible for patients to reduce the dose of pain medication and opioids. Another advantage is that patients do not develop a tolerance to the use of medical cannabis as they do with opioids.

Accordingly, for many patients, medical cannabis can be an important component in the overall structure of pain therapy to achieve pain relief and improve quality of life.