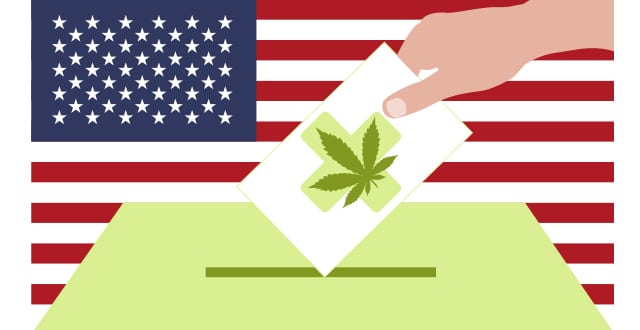 On November the 8th 2016 the people of America will go to the polling stations to decide who will inhabit the White House for the next 4 years. However, in addition to choosing between Donald Trump and Hillary Clinton, some states will vote for or against the legalization of cannabis.

On the ballot papers of the 35 states, a total of 154 initiatives will be submitted to the vote of the American citizens. The initiatives are state-based but revolve around common themes. In the case of cannabis use for therapeutic purposes, about 82million Americans could see changes in cannabis use legislation in their state.

Proposals for cannabis use and possession in nine states have been submitted for the 2016 US elections. Governments in Arizona, California, Maine, Massachusetts, and Nevada will vote on the legalization of cannabis for recreational purposes. Meanwhile, in Arkansas, Florida, Montana and North Dakota they will vote to decide whether they want to legalize the use of cannabis for medical purposes.

California and Florida, two key states in the legalization of cannabis

California, Arizona, and Nevada are the three states where the legalization of cannabis for recreational/ therapeutic use is more advanced. So, this Tuesday could be the day that those states give the yes to the use of cannabis for therapeutic purposes.

The situation is especially interesting in California, where people have been able to purchase cannabis, with a prescription, since 1997. If California, which is the country’s most populated state, voted in favor of cannabis for recreational reasons, the sale process would be simpler. In addition, the decision could mark a ‘before and after’ point for other similar initiatives at a federal level.

In the case of Florida, in these elections, citizens will decide whether to legalize the use of medical cannabis. If a majority exceeds 60% of votes, Florida could become the first state in the south to legalize cannabis for both recreational and therapeutic use.