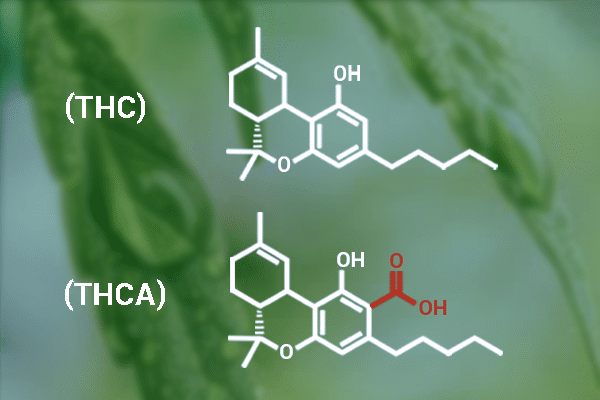 The cannabis plant is made up of hundreds of components, known as cannbinoids, that each have their own therapeutic benefits. One of these components is tetrahydrocannabinolic acid, better known as THCA.

It is the component of cannabis Sativa L, precursor of tetrahydrocannabinol (THC), one of the most abundant cannabinoids in the variety of cannabis plants. THC derives from the THCA through a chemical process called decarboxylation, which occurs during the drying of the plant. This process becomes faster when cannabis is heated, such as when smoking or vaporizing.

The biggest difference we can find between the two is that THCA is not psychoactive. This means that consuming it does not produce a sense of euphoria. The reason why this occurs is that each interacts differently with the CB1 receptor, one of the cannabinoid receptors of the endocannabinoid system. It is for this reason that other cannabinoids, like the cannabidiol or CBD, for example, are also not psychoactive[1]. However, this is not the only difference, because its chemical structure is different: The THCA possesses a carboxylic acid group that cannot be found in THC.

Despite these differences, THCA and THC share some similar therapeutic properties. Both are anti-inflammatory, because according to several studies, both can mediate in inflammatory[2] processes, so they could be useful to treat pathologies such as fibromyalgia or osteoarthritis. In addition, from these anti-inflammatory properties, both components can be postulated as potent neuroprotective agents in neurodegenerative diseases such as Alzheimer’s[3].

The two components have also shown to have antiemetic properties. However, it should be noted that there are studies that indicate that THCA would have more ability to stop nausea and vomiting than THC[4].

Likewise, the THCA also has other quite interesting properties. There are trials that show that it has antiproliferative effects, very suitable for treating tumors and cancer, especially in cases of breast[5] or prostate[6] cancer.

However, research focused on THCA or any other acid form of other cannabinoids is very scarce. It is known that they can offer other properties that could treat various pathologies, but for this we should continue to study all their properties and what doses should be administered for it to work.