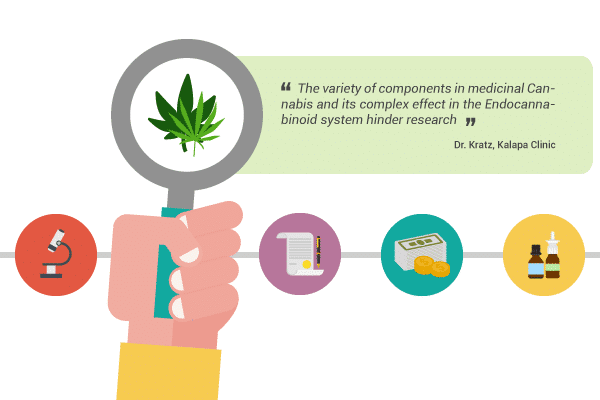 The only way we can know the true medical benefits of the marijuana plant and its compounds is by conducting extensive research. Like with any new drug, it is imperative that every aspect of it will be studied in order to have a complete understanding of the effects it has on different pathologies. We need to know the benefits, the risks, the side effects, the best ways of administration and much more. However, due to the legal status of marijuana in most countries, this type of research can often be arduous.

Researchers and scientist have to clear a plethora of hurdles before they can even have access to the plant in question. This, and many other factors, make it an undesirable path to take. This article will explore the issues and boundaries that researchers face when embarking on medical marijuana studies.

First, there are legal boundaries. In countries where there is no kind of medical marijuana reform it is almost impossible to obtain authorization from the government to start research. Even in the states in the USA that have legalised medical marijuana, the government have made it incredibly difficult to have access to the plant. Unless you apply for multiple authorization letters from the DEA, FDA and the NIDA (National Institute on Drug Abuse) you will never get close to starting a study.

Let’s say you get all of the necessary documentation to start, you will still have to comply with their strict guidelines for access and storage, at your own expenses. Then comes the next problem, the supply. Depending on where the study is being conducted, the supply barriers differ. In the USA you can only access marijuana for research purposes through the NIDA. Their supply comes from the only licenced producer of the plant, the University of Mississippi. Previously they could only produce a limited variety of marijuana which is no near the range that is needed to study all of the various plants compounds. Thankfully this is changing now as the need for more research increases.

So, now that you have permission from your government and you have access to the plant itself. You can begin your research. Herein lies the next barrier; the methodology. How will the drug be administered? Smoked? Vaped? Sublingually? Suppository? Depending on the research facility, there might not have the correct environment to allow study participants to smoke in controlled spaces. Then comes the issue that some participants do not smoke or, in relation to medicine, the doctors would not prescribe smoked cannabis as a form of administration, for somewhat obvious reasons. Also there are difficulties when trying to dose smoked cannabis, each participant will have their own tolerance and style of smoking, making consistency harder to achieve. Furthermore, certain ingestion methods have a lot of stigma surrounding them and should be disregarded if this type of treatment is to become more mainstream.

There are certified cannabis based drugs already on the market, such as Dronabinol (a synthetic form of THC, provided in capsules) which focus on being at the right dose. The issue with this is that it would only reveal the effect of a single cannabinoid (THC) on certain illnesses. On the other hand, the benefits of using the whole plant extraction is that it contain a wide variety of cannabinoids, terpenes and flavonoids, which allow the entourage effect to take place.

The problems don’t stop here. The next hurdle is what to do about the placebo issue. When new drugs are being tested, it is the prospective, randomized, double-blind and placebo-controlled clinical trials that worth anything. Placebo test subjects provides researchers the ability to quantify the real effects of the drug being tested. THC produces a unique psychoactive effect and therefore affects the blinding of the study. If subjects have previously experienced this effect, which it is very recognizable then they would be able to tell if they have been given a placebo, making valid results unachievable. Furthermore, generally people have different tolerances to cannabis. Previous interaction with the drug, along with genetic variables, means that everyone is affected differently by THC. Therefore, testing THC at different doses becomes harder.

Another issue highlighted by Dr. Janosch Kratz from Kalapa Clinic, is the variety of different cannabinoids and compounds used during clinic trials research. They are all labelled as cannabis, however, some researchers will only use synthetic cannabinoids which do not carry the same medical or biochemical properties as authentic cannabis. Besides, some studies write about the effect of “Cannabis” in general without specifying the strain and the proportion of the more than 100 cannabinoids contained in the plant. This lack of exact definition of the active principle being used, together with the difficult blinding of the studies, are problems to be solved for future investigations in the field of medical cannabis. More work needs to be done in order to find a standardized way for testing cannabis and once achieved researchers all over the world will be able to compare findings, propelling research into the future.

Last but not least, the money. Funding for medical research is limited in most countries and it is estimated that the price of a single study (from concept to approval) can reach up to one billion dollars. Many studies are funded by the government or philanthropists at the beginning, but there are multiple levels of funding needed all over the course of the study. By the end, money usually comes from pharmaceutical or drug companies but in this case, which pharmaceutical companies would spend money on a drug that cannot be patented or could potentially turns their own products obsolete?. While the buzz around medical marijuana continues getting louder, more and more societies for medical testing are being created in order to raise some money, such as DFG, a German research foundation.

Marijuana and its properties as an alternative treatment is increasing, but the only way to know if cannabis has any medicinal properties is by conducting research, which means rising the number of medical studies and diminishing the barriers to start with it.