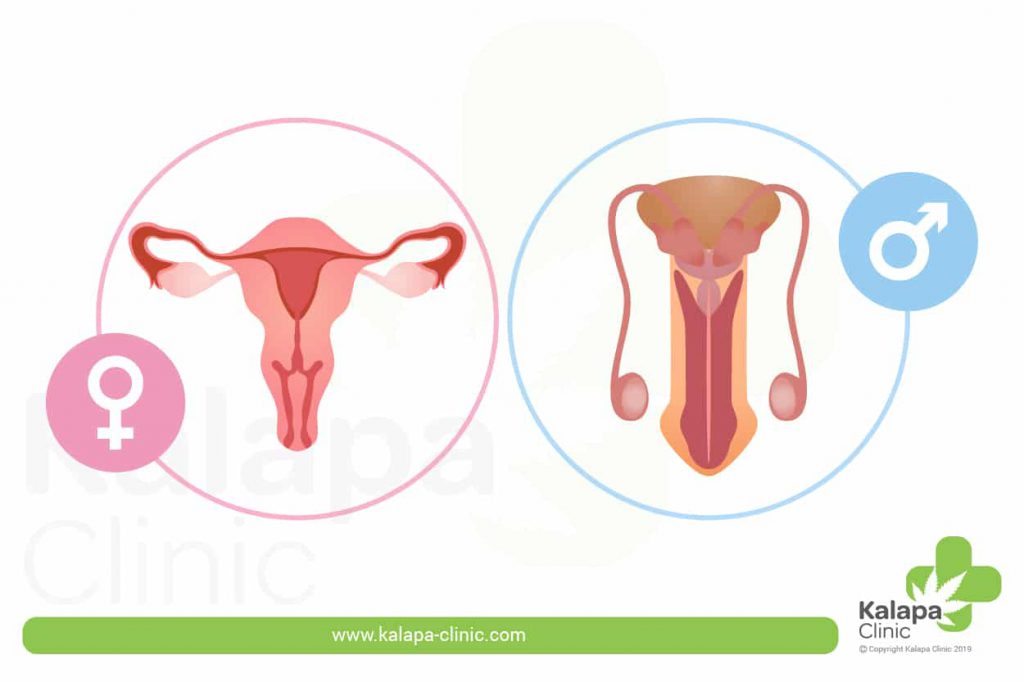 There have been several researches carried out on finding the role of the endocannabinoid system in the reproductive systems.  It has been found that the endocannabinoid system is in fact crucial for a healthy and fertile reproductive system in both male and females.  To date, the ECS is considered a master system deeply involved in the control of several physiological processes, including fertility.

What is the endocannabinoid system?

The endocannabinoid system consists of cannabinoid receptors which are essential in maintaining regular bodily functions.  The two most extensively studied endocannabinoids are N-arachidonoylethanolamine (anandamide; AEA) and 2-arachidonoylglycerol (2-AG).  AEA and 2-AG bind together to activate two G-protein coupled receptors (GPCR): cannabinoid receptor 1 and 2, CB1 and CB2 respectively. CB1 mainly resides in the central nervous system (CNS) and CB2 in the immune system cells. Overall, the receptors of the ECS exert a strong impact on fertility, reproduction and endocrine function.

In the female reproductive system

In humans, AEA and fatty acid amide hydrolase (FAAH) have been found in the ovaries, oviducts, endometrium and myometrium. In fact, the endocannabinoid system has been discovered in folliculogenesis, oocyte maturation, and ovarian endocrine secretion, oviductal embryo transport, implantation, uterine decidualization and placentation. In addition, high levels of endocannabinoids and exogenous cannabinoids inhibits the release of gonadotropin releasing hormone (GnRH), luteinizing hormone (LH), follicle stimulating hormone (FSH), estrogen and progesterone) via an intricate crosstalk between the hypothalamic (CB1)-pituitary (CB1)-ovary (CB1/CB2/FAAH/NAPE-PLD) axis. The ovarian cycle is controlled by hormones secreted by these three structures.[1]

Furthermore, high levels of AEA are degraded by COX-2, this leads to the creation of arachidonic acid, required to produce PGE2, which helps for the maturation of the ovum. Interestingly, CB2 was present at higher levels in the ovarian follicles as compared to CB1, and is detected in ovum only at a late stage of development2.

Once sperm cells are released into the vagina, they swim from cervix to oviduct and activation of CB1 and CB2 are involved. CB1 activation produces immobile cells, while CB2 slows down sperm motility. These conditions are necessary to ensure the presence of enough competent sperm at the time of ovulation.

In addition, preclinical studies demonstrated that along the uterine tract, in both uterine fluids and seminal plasma, elevated AEA levels may prevent precocious capacitation (sperm maturation) and posterior “out of place” acrosome reaction (head in the spermatozoa which contains digestive enzymes) in freshly ejaculated sperm via CB1. Once the sperm cells are reaching the ovum, they are exposed to a progressively reduced concentration of AEA and sperm capacitation is finally complete, but concentration of AEA are still sufficient for the activation of TRPV1 which continues from preventing spontaneous acrosome reaction. Consequently, acrosome reaction will only start from the sperm-ovum interaction. Indeed, prolonged exposure of human sperm cells to TRPV1 antagonist (capsazepine) inhibited sperm-ovum fusion.

After successful fertilization, a series of cells divisions occurs forming a blastocyst which subsequently forms the embryo. In women with ectopic pregnancy, higher levels of AEA were found in oviductal tissue. These results were associated with low blastocyst development, oviductal retention of embryos and implantation failure. While in the fallopian tubes, CB1 and FAAH were lowly expressed but not CB2. It has been hypothesized that CB1 regulates adrenergic signalling affecting on muscle contraction.

After the sperm and ovum meet each other in the central portion of the fallopian tube and form the blastocyst, an increasing AEA gradient helps the journey to reach implantation in the uterus, preventing extrauterine implantation, so that low AEA content must be kept at the implantation site. In fact, implanting blastocyst increases FAAH which reduces AEA levels.

ECS and stage of pregnancy

ECS in the male reproductive system

Sertoli cells, the supporting cells localized within the seminiferous tubules, provide a unique protective environment for sperm development during spermatogenesis. Their main role is to provide hormones, growth factors, and other glycoproteins needed for sperm nourishment, as well as to form the blood–testis barrier. The endocannabinoid systema comes into play as it has been detected in different stages of development.

Additionally, CB2 has shown to play a crucial role in the mitotic and meiotic phases of spermatogenesis, but not during the late process of spermiogenesis, which is responsible for the transformation of spermatids into spermatozoa.

Furthermore, prior to ejaculation, sperm can acquire precocious motility if there is a disruption of CB1, according to preclinical studies. In human sperm data, elevated AEA levels activates CB1 or TPRV1, and promotes the fertilizing ability of sperm during capacitation, on the other hand, AEA compromises motility in a CB1 activation manner that involves glycolysis, cellular respiration and inhibition of mitochondrial activity[2]

In another recent article, characterisation and localisation of the ECS components in the adult human testis were studied. Results showed the presence of 2-AG, endocannabinoid-synthesising proteins; diacylglycerol lipase (DAGL) and N-acyl-phosphatidylethanolamine-specific phospholipase D (NAPE-PLD) were confirmed in germ cells and somatic cells. Respectively, cannabinoid receptors, CB1 and CB2,  were identified in low levels in post-meiotic germ cells and Leydig- and peritubular cells, cannabinoid enzymes; monoacylglycerol lipase (MGLL) in Sertoli cells, and the Fatty acid amide hydrolase (FAAH) in late spermatocytes and post-meiotic germ cells. The results are relevant in relation to the studies that show the relationship between semen quality, and reproductive hormone levels, and the use of cannabis in young men.[3]

Effects of cannabinoids on reproduction and fertility

Several studies have been carried out to find how Cannabidiol (CBD) or Tetrahydrocannabinol (THC) can affect the reproductive systems.  However, the majority of these studies were experimented on rats and may not fully correspond to humans.  For example, one study discussed chronic CBD exposure in mice which promoted functional impairment in sexual behaviour and fertility. [4]

Over the years, the use of marijuana, mainly its component THC, has been associated with sperm anomalies, decreased sperm motility and structural changes in the testis.  However, the fertility of sperm as well as the generation of embryos remains unclear, and even showed that chronic use of THC showed no changes in sperm motility or concentration nor generate any methylation change in the brain and embryos generated through in vitro fertilization (IVF). Moreover, the embryo production by IVF was no different using spermatozoa from both THC and control mice.

The effects of chronic treatment with THC in embryo production by in vitro fertilization showed that the exposure did not affect the ability of sperm to fertilize oocytes in vitro and the ability to produce embryos until preimplantation stages.

This study goes against belief that THC consumption has a negative impact on the male and female reproductive processes. Interestingly, there are no real studies regarding the fertility potential of any mammal who has continually used cannabis.  Regardless of the fact that the route of THC consumption used in this study is not used in humans, making it unable to perform a direct translation of this study to humans, once THC is inside an organism, the pharmacokinetics and molecular binding of THC is similar in all experimental models.

However, although it is made to seem that cannabis, or some of its compounds, are capable of acting in male gonads, by analysing and taking into account all of the data, researchers believe that claiming that cannabis reduces male fertility is alarming and not entirely true. In fact, in all studies conducted in humans, the results of sperm tests remained within normal ranges and probably would not have affected actual fertility.[5]