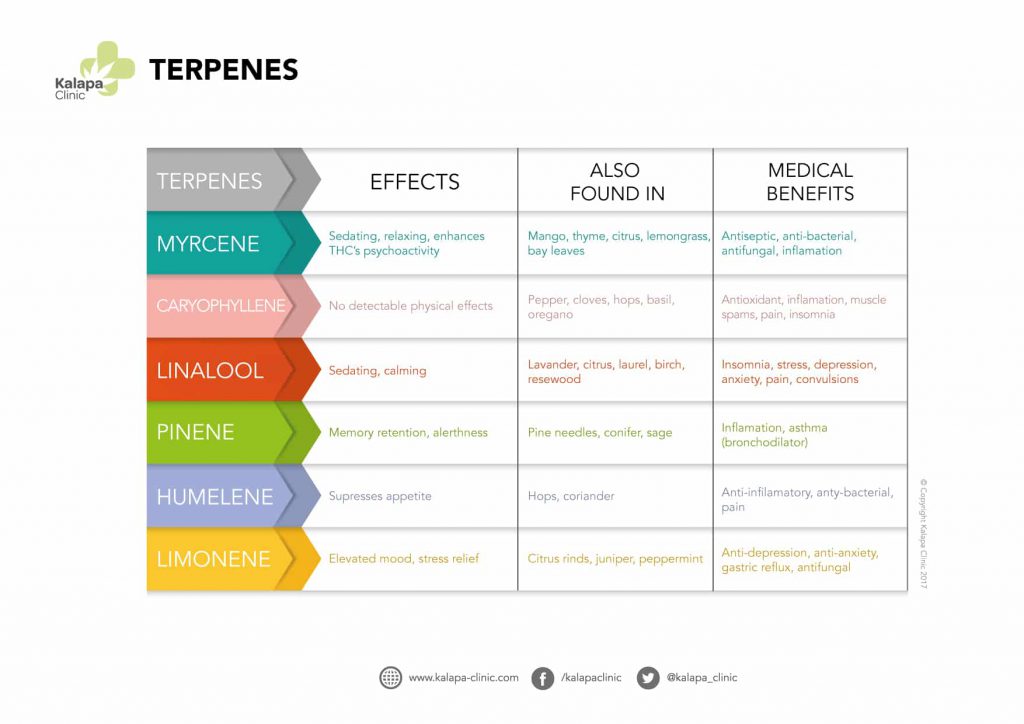 Terpenes are organic, aromatic hydrocarbons that can be found in thousands of plants around the world. They are part of the alkenes, alcohol, esters and ethers families. If these compounds are known, it is mainly because they are responsible for the smell and the taste of plants. Most of the plants will synthesize and release terpenes with important environmental and physiological repercussions.

Terpenes are volatile compounds that become part of the atmospheric gases, but they can also accumulate inside the plants. The wide range of medicinal properties in these compounds opens unsuspected development opportunities for scientific research. As the research progresses, the complexity of terpene functions and their benefits are being discovered.

Cannabis contains a large number of terpenes that are therapeutically beneficial to the human body. They are also responsible for the odours that we associate with cannabis, as well as other products that we encounter in day to day life, such as cheese and blueberries.The smell and the taste of cannabis and many other products depend on the presence and proportion of the different terpenes found in aromatic plants. In addition, they have therapeutic effects that enhance and complement the effects of the cannabinoids.
In general, terpenes play an important role in the treatment of pain, inflammation, depression, anxiety, addiction, epilepsy, cancer and bacterial and fungal infections.

Although medical cannabis is composed of lots of different types of terpenes, these are the main ones:

The combination of terpenes and cannabinoids: the entourage effect

This diversity of components in nature also show the limits of the synthesis of the pharmaceutical industry. When combined with cannabinoids and other plants, terpenes act differently, just as synthesized pure THC has much weaker effect without terpenes. While recognizing the high presence of terpenes in the intensity of plant’s odour, its concentration depends on the variety of medical cannabis and their modes of cultivation. That is why it is very important to know which varieties of medical cannabis have been adapted to suit your needs. On the other hand, it is imperative to consider different forms of consumption of therapeutic cannabis since certain ways can affect the potency of the terpenes: