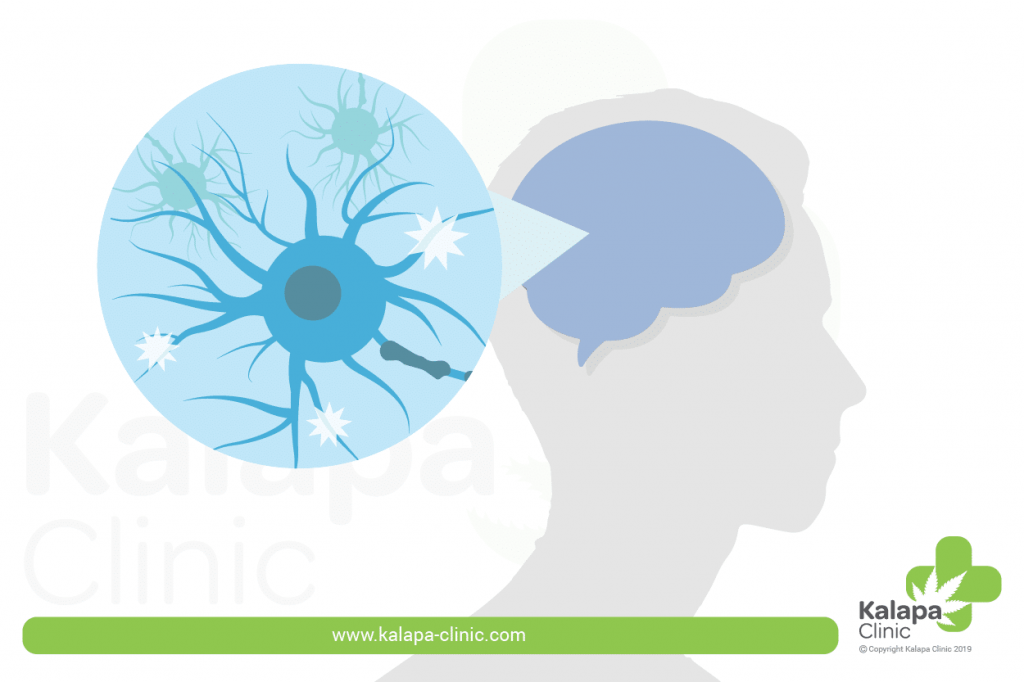 Multiple sclerosis (MS) is one of the most common neurological diseases. It usually occurs between the ages of 20 and 40 and has a relapsing course. The symptoms are manifold. Although standard therapies can reduce the frequency and duration of relapses, common drug therapies are not free of severe side effects. Medicinal cannabis may be a complementary treatment option with few side effects to relieve various MS symptoms. This has been shown by various studies.

Multiple sclerosis (polysclerosis) is an autoimmune disease or a chronic inflammatory disease of the central nervous system (CNS) in which the inflammatory processes in the brain and spinal cord destroy parts of the nerve fibres. The defence cells, which actually attack pathogens and foreign substances, damage the body’s own tissue in the process. Put simply, this means that the immune system turns against its own body.

Multiple Sclerosis: What are the causes?

The exact causes have not yet been finally clarified. Although it has been proven that the disease is caused by inflammatory processes in the brain and spinal cord, it is not clear why this happens. Different factors seem to play a role, such as the autoimmune process.

Infections with viruses (e.g. herpes viruses, chlamydia or the Eppstein-Barr virus), which resemble the body’s own structures, may be a possible cause. These could also be the cause of other autoimmune diseases, such as rheumatoid arthritis or systematic lupus erythematosus (SLE).

Furthermore, hereditary factors also play an important role. Relatives of MS-patients have up to 30 times higher risk of developing the disease.

What are the symptoms of multiple sclerosis?

The typical MS-related symptoms include:

Other symptoms can also occur, such as impaired taste, balance and speech. There may also be disturbances during bladder and stool emptying. The psyche also suffers from the disease. Many affected people develop depression and suffer from mood swings or insomnia.

As varied as the symptoms are, numerous triggers can also lead to an acute attack. Particular risk factors can be stress, infections, certain vaccinations or hormone fluctuations. Drugs that influence the immune system can also trigger an acute attack.

Diagnosis and therapy of multiple sclerosis

If MS is suspected, an anamnesis interview and a comprehensive neurological examination are usually followed, during which muscle strength, reflexes and sensations are tested, among other things. A cerebrospinal fluid puncture (removal of nerve fluid) is performed to confirm the diagnosis. In addition, electroencephalography (EEG) and magnetic resonance imaging (MRI) can also confirm the diagnosis, as these imaging procedures can be used to detect the pathologically altered centres of inflammation.

Since multiple sclerosis cannot be cured, the aim of therapy is to relieve the acute symptoms (symptomatic therapy) and to treat acute attacks. In addition, drugs can be used to try to reduce the inflammatory processes.

If the therapy does not work in a patient or if a highly active phase occurs, immunotherapeutic drugs with the active ingredients daclizumab, natalizumab or alemtuzumab are usually prescribed. These drugs contain targeted antibodies.

In addition, other drugs such as high-dose glucocorticoids (anti-inflammatory drugs) are also used in acute phases. However, an acute attack cannot always be relieved with cortisone therapy. In addition, treatment with cortisone is also associated with side effects, from which the patients suffer additionally.

Course of disease and prognosis

Multiple sclerosis is initially relapsing-remitting and later chronically progressive. The exact course of the disease cannot be predicted. It varies from patient to patient. About one third of all patients in the advanced stage of the disease live without a major severe disability. Another third shows only partial restrictions in their daily life and work. In another third, the disease is accompanied by an inability to work and the need for care.

Cannabis as medicine for multiple sclerosis

About 80 percent of patients suffer from spastic disorders that cause pain. Various studies have already shown that cannabinoids can have a positive effect in spasticity.

In 2004, Swiss researchers found in their double-blind crossover study that 37 out of 50 people with MS experienced a reduction in the frequency of muscle spasms after treatment with an orally administered standardised cannabis extract (1).

Another clinical study from the UK in 2007 also showed that medical cannabis was more effective than a placebo (2). A standardised oromucosal medicine (mouth spray) containing THC and CBD was used.

US researchers also investigated the effect of cannabis extracts on spasticity and muscle spasms in multiple sclerosis and were able to confirm a positive effect (3).

More recent studies also show that MS patients can benefit from cannabis-based drugs. In April 2017, New Zealand researchers reported on patients with MS who did not respond adequately to treatment with standard medicines. After 12 weeks of administration of the oral spray Sativex (THC/CBD), spasticity symptoms improved (4).

The majority of patients suffers from severe pain – whether due to spasticity or inflammation of the nerve tissue. It is well known that cannabis as a medicine can have a beneficial effect on chronic pain. Studies have also shown that medical cannabis can be effective in pain associated with multiple sclerosis in the form of ready-to-use or prescription drugs or medicinal dried cannabis flowers (5).

Research suggests that the medical effects of cannabis on MS-related spasms and muscle spasms are due to the fact that the non-psychoactive cannabinoid CBD is believed to be able to reduce nerve inflammation. In an Israeli study from 2011, the researchers showed in mice with an MS-like condition that after administration of highly concentrated CBD they were able to move their stiff legs again and showed less inflammation (6).

In 2017, the same Israeli researchers reported that pro-inflammatory astrocytes (star-shaped nerve cells) are involved in almost all brain functions and that they interact with the endocannabinoid system. After evaluating the data collected, the researchers explained that the activity of the astrocytes could probably be reduced by the administration of CBD (7). This could have a positive effect on the course of the disease in MS, Alzheimer’s disease and epilepsy. However, there is still a lack of clinical research to confirm these assumptions.

The results of studies to date on the effectiveness of cannabis as a medicine for the symptoms of multiple sclerosis, such as spasms, chronic pain and inflammation, are encouraging for patients. It is known from numerous testimonies of patients who have used cannabis treatment to alleviate the symptoms of multiple sclerosis. In addition, they often report that their sleep quality and also their overall quality of life improves.

Furthermore, multiple sclerosis is one of the few confirmed indications for the use of medical cannabis.