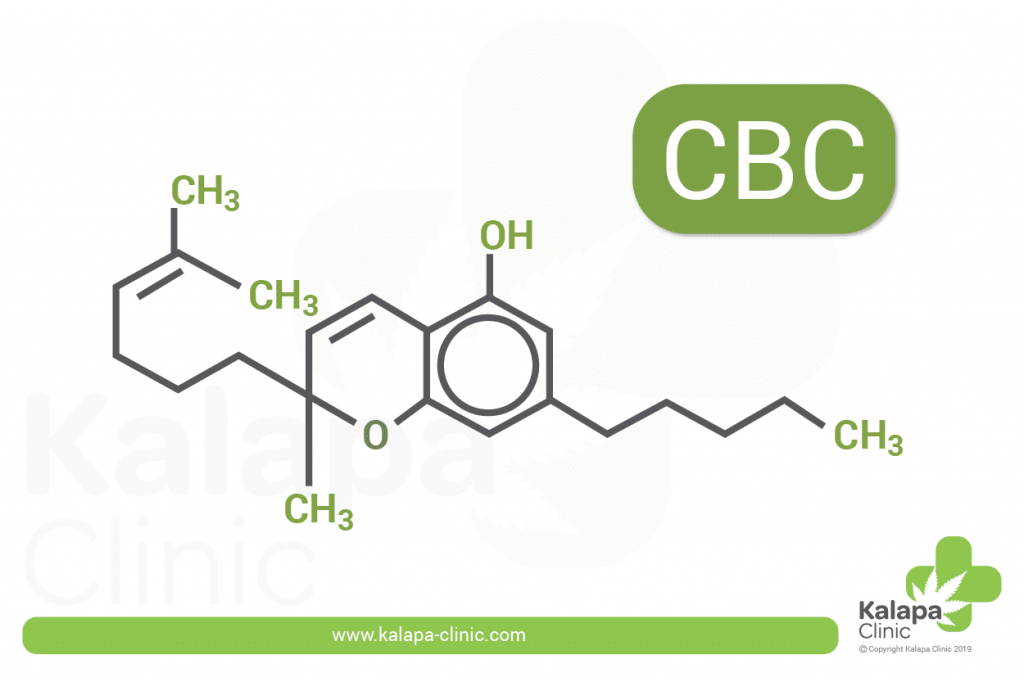 Cannabinoids are the naturally occurring chemical compounds found in cannabis plants. Currently, there are over 180 classified cannabinoids, and perhaps more to be discovered as studies continue to reveal the complex molecular structures of cannabis. Today we want to talk about the medicinal benefits of Cannabichromene, also known as CBC.

Cannabinoids are partly responsible for the wide array of medicinal benefits cannabis may provide. These effects on the body are produced by the interaction with human physiology through the endocannabinoid system (ECS), a wide signalling net of receptors, involved in the regulation and promotion of the homeostasis all over the body.

The cannabis plant relies on cannabinoids binding to those receptors to produce the array of potential benefits and effects. However, each cannabinoid holds unique characteristics depending on the receptor they bind with. Therefore, a different effect is produced on different receptors.

The main intent of the research on medical cannabis and its therapeutic potential aims to understand the real mechanisms behind each cannabinoid and how they work on the body. So far, the majority of the research has focused on THC and CBD, the first discovered and the most abundant cannabinoids in cannabis. For this reason, you probably haven’t heard of cannabichromene.

First discovered in 1966, CBC has become one of the most studied cannabinoids of cannabis plant. CBC shares a similar molecular formula as CBD and THC, with some slight differences, causing the compound to interact with the endocannabinoid receptors differently to produce various effects.

Cannabichromene is a powerful, non-psychotropic cannabinoid, meaning it will not produce any alteration in the perception of reality, distinctive to other cannabinoids such as THC (tetrahydrocannabinol).

How does CBC work on the endocannabinoid system?

Cannabichromene is a curious cannabinoid because it seems to not bind to any cannabinoid receptors, nor to CB1 such as THC for producing the psychotropic effect or to CB2 throughout the body like CBD. Nevertheless, CBC is widely considered to indirectly bind with the ECS as it stimulates the body to produce naturally occurring endocannabinoids, anandamide (AEA) and 2-arachidonoyl-glycerol (2-AG).

CBC can also act as an agonist on some kinds of receptors, especially vanilloid and ankyrin receptors (primarily TRPV1 and TRPA1), responsible of turning off the process of breaking down endocannabinoids, like anandamide for example. By acting on these receptors, CBC increases levels of naturally synthesized endocannabinoids in the body, by inhibiting the natural processes that degrade them. Basically, CBC primarily has an indirect effect on the ECS and its effort to regulate our functions. [1]

While the body of research investigating the medicinal benefits of CBC is lacking in volume, the findings in the studies that have been done so far indicate promising therapeutic potential. Researchers have so far shown that CBC has several possible medical applications, mainly in symptoms management of the following pathologies:

Cannabichromene has shown a powerful anti-cancer activity, inhibiting the uptake of anandamide, allowing it to remain longer in the bloodstream. In a study in 2014, anandamide showed the potential to inhibit the growth of cancerous cells and to fight breast cancer in vitro and in vivo, which can one day represent a potential chemo-preventive agent. [2] [3]

A previous study, published in 2013, also showed the potential in reducing inflammation and tumour growth, on mice with skin carcinogenesis. [4]

Another promising effect produced by CBC is its ability to alleviate pain. In a study published in 2011, CBC was able to effectively block pain perception, stimulated descending pathways of antinociception and produced analgesia in rats, by interacting with several target proteins involved in nociceptive control. [5]

In addition to its ability to block pain, CBC has also shown to have anti-inflammatory potential. In 2010, a wide research was conducted in order to analyse the anti-inflammatory properties of CBC, THC, and their combination in the lipopolysaccharide (LPS) paw edema assay. The study showed that although CBC produces pharmacological effects, unlike THC, its mechanism of action didn’t involve CB1 and CB2 receptors.

Indeed, the CB1 receptor antagonist, rimonabant, failed to block the activity of CBC, indicating a non CB1 receptor mechanism of action. However, several non-cannabinoid drugs have also shown to have similar effects, including central nervous system depressants and anti-psychotics, which were not blocked by rimonabant. Since the effects of CBC were not blocked by a CB1 receptor antagonist, the mechanism by which CBC produced its effects remained to be established in future studies.

They observed that a threshold dose of THC augmented the effects of CBC. However, high doses of CBC led to increased brain levels of THC, suggesting a potential pharmacokinetic interaction for the augmented effects of the two drugs co-administered. [6]

The latest researches on CBC highlight one of the most unique benefits of CBC. It may actually promote brain cells growth and the development of new one, a process known as neurogenesis.

Neurogenesis is a process that doesn’t stop once the brain is completely formed, when a certain age is reached, but it occurs also in specific areas of the adult brain, primarily in the hippocampus. [7] The hippocampus is involved in important tasks, such as memory and learning, and a malfunction of this area is believed to contribute to a number of disorders, like depression and Alzheimer’s, among others.

A 2013 study, conducted by Italian researchers, tested the effects of three major non-psychotropic phytocannabinoids, CBD, CBG and CBC, placing a particular attention on CBC specifically. The results showed that CBC offers neuroprotection to neural progenitor stem cells (NPSCs), which are used by the brain to replace and heal parts affected by a stroke or an injury, or even by chronic stress-induced inflammation. However, before considering the possible clinical implications of these results, the action of this compound on each stem cell population in vivo, in the context of various physiological and pathological circumstances, needs to be further investigated. [8]

During the past few years, the antidepressant action of cannabis and the interaction between antidepressant drugs and the endocannabinoid system has been reported in several studies.

In 2010 a study has been published, whose aim was to assess the antidepressant-like and dose-dependent effect of CBC and the other most prominent cannabinoids. The results showed that CBC and a number of other cannabinoids may “contribute to the overall mood elevating properties of cannabis”. [9]

In August 2019, a new study was published partially revealing some mechanism behind the effects of CBC. The researchers mainly sought to determine the influences of CBC and other cannabinoids on CB1 and CB2 receptors.

The results showed that CBC is a selective CB2 receptor agonist, also displaying higher efficacy than THC in hyperpolarizing membrane cells and can also recruit CB2 receptor regulatory mechanisms. Although CBC provides medicinal benefits through CB2 receptor-mediated modulation, similar to those produced by THC, CBC has not shown any affinity with CB1 receptors, revealing why this cannabinoid doesn’t induce any psychotropic effect, as opposed to THC. [10]

This may represent one of the most important findings in CBC, showing the promising viability of this cannabinoid on conditions for which THC has already widely shown its medicinal potential.

These are promising signals of the possible contribution of CBC to the potential therapeutic effectiveness of some cannabis preparations, potentially through CB2, vanilloid and ankyrin receptors mediated modulation of inflammation and support on the endocannabinoids production and survival. However further studies on humans are still needed, in order to further understand the whole mechanism of action and medicinal benefits of Cannabichromene.