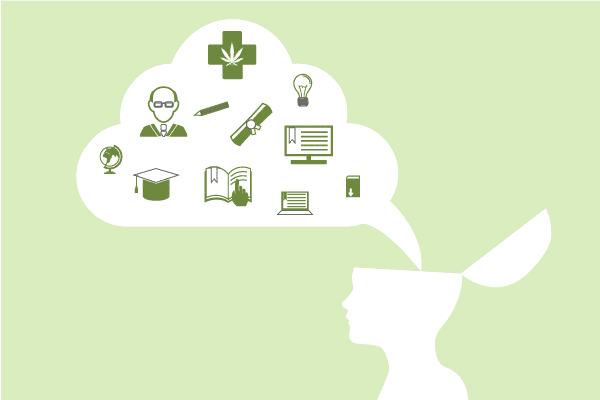 Medical cannabis is currently gaining importance in more and more countries. It feels as though there is not a single month that goes by in which no new country decides to legalize medical cannabis. However, the problem is that many patients are not getting medical cannabis prescribed, despite its legalization. Often doctors are not well enough informed about the medical benefits of cannabis and therefore would rather have nothing to do with it[1].

The reason for this is the fact that medical cannabis, in medical study programs at universities, is barely on the curriculum. This was recently confirmed by a study from the Washington University in the US, where more than half of all states have legalized medical cannabis.

When questioning the students, 90% answered that they were not prepared to prescribe medical cannabis at all and 35% were not even able to answer questions on the subject. The study showed that there is a huge imbalance between the legalization of medical cannabis and the simultaneous integration of it into the curricula.

Medical education must adapt to the new reality of medical practice

With more states on the threshold of legalizing medical cannabis, medical education should adapt to this new reality of medical practice. It is not only in the US that the topic is neglected, but also in the training of German doctors. The topic of medical cannabis is neglected says Dr. Franjo Grotenhermen, Chairman of the Working Group on Cannabis as Medicine (ACM).

The topic is also neglected in other countries, such as Spain. “At the university, nothing was taught about medical cannabis. However, this would be very important as medical cannabis can be used to develop new therapeutic approaches with less toxicity for a wide spectrum of diseases” notes Dr. Peguero from the Kalapa Clinic, which is the first centre in Europe that is specialized in cannabinoid treatments. His knowledge of the medical potential of cannabis, says Dr. Peguero, was acquired solely by himself, by doing his own research and attending specialized seminars and conferences.

In a report from DOC-Check Franjo Grotenhermen emphasizes why cannabinoids are an important part of a medical education: “The endocannabinoid system of the body and the effect of endogenous cannabinoids are still not taught in any country”- even though this is the basis to understand the multiple therapeutic possibilities of medical cannabis – “You have to know that the body’s own cannabinoids are important inhibitors in the nervous system. In hyperactivity of the nervous system, they inhibit all other neurotransmitters. This explains their therapeutic range. Whether it is epilepsy, migraines, pain or nausea, cannabinoids help to keep things down to normal” says Grotenhermen.

It should be stated that there is an urgent need for more training on medical cannabis to ensure that patients receive the best possible treatment and the most up-to-date scientific knowledge. In the end this could also lead to more medical cannabis being prescribed by physicians to patients who really need it. Furthermore, it may also lead to more studies being carried out on the medical potential of cannabis, thus creating more information to be taught to medical students.