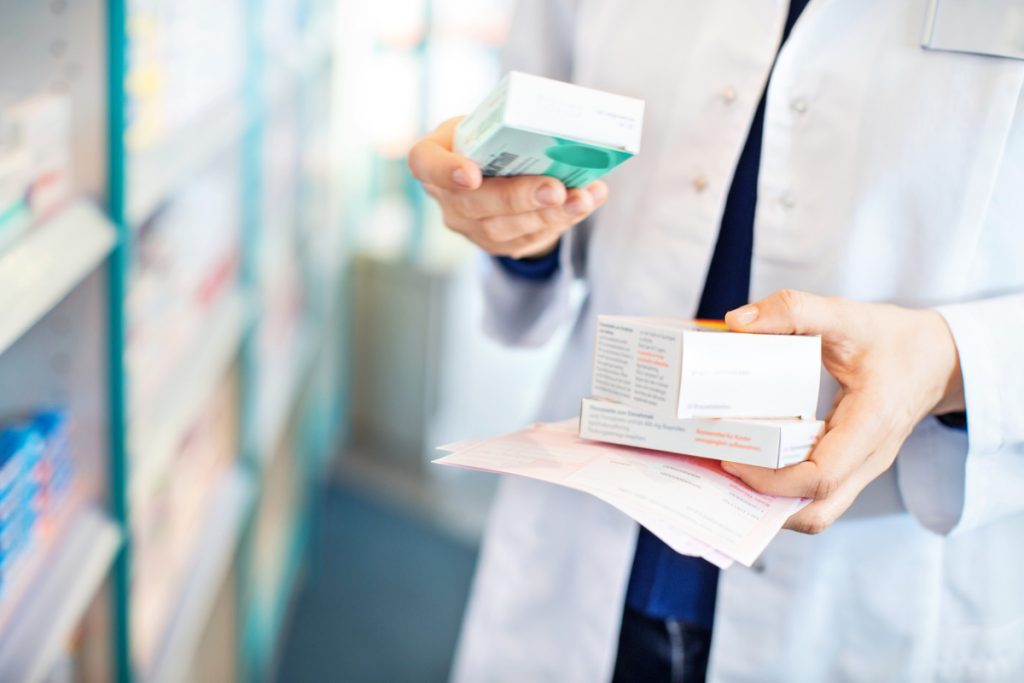 Like any medicine, medical cannabis can interact with other prescribed and pharmacy medicines. Cannabis patients are often seriously ill and therefore often take many medicines. Since the cannabinoids tetrahydrocannabinol (THC) and cannabidiol (CBD), like various other active substances, are broken down by enzymes in the liver, interactions are possible when certain medicines are taken at the same time. There may be undesirable side effects like enhancement or reduction of the effect of both the cannabinoid and the other drugs. Some interactions are therapeutically useful: For example, many chronic pain patients achieve a better reduction of their symptoms by combining cannabis with opiate painkillers.

Chronically ill and elderly patients are particularly affected by interactions, as they are often multimorbid. This means that they have many underlying diseases and take several medicines. Experts speak of polymedication when patients take more than five medicines on a permanent basis [1]. Data from the statutory health insurance funds from 2015 showed that patients over 65 years of age take an average of 3.9 daily doses of various medicines which increases the risk of potentially dangerous effects. The turnover of medicines in this age group alone was 43 percent. The most frequent prescriptions were in the 80- to 89-year-old group [1]. Drug interactions can have serious consequences: Up to 7 percent of all inpatient treatments are due to adverse interactions [2].

In addition to prescribed medicines over-the-counter and non-prescription medicines can also cause interactions. For example St. John’s wort can lead to the increased production of liver enzymes which causes various drugs including THC and CBD to be broken down more quickly. Certain foods can also influence the metabolism of medicines.  For example grapefruit and grapefruit juice block certain liver enzymes and can delay the breakdown of cannabinoids and other drugs.

However interactions do not necessarily have to result in negative consequences. Certain active ingredients are combined to achieve synergistic effects, i.e. a mutual enhancement of effects. [12].

Why does interaction occur?

More than 50 percent of all drugs are broken down in the liver by so-called cytochrome P450-dependent enzymes (CYP enzymes) [3].

Since the cannabinoids tetrahydrocannabinol (THC) and cannabidiol (CBD) are also broken down via CYP enzymes, interactions are possible when taken simultaneously with certain medicines.

Cannabis-based medicines can also increase the effects and side effects of other medicines, such as sedatives and sleeping pills.

THC and CBD are broken down in the liver by different types of CYP enzymes which are also involved in the metabolism of many other active substances:

Which enzymes are influenced also depends on the application method of the cannabinoids. If cannabis is smoked alone or with tobacco, CYP1A2 enzymes are increasingly formed. [4].

Cannabinoids and their interactions with other active substances

Mutual effect enhancement (additive effects) in combination of medicinal cannabis and other medicinal products
Since cannabis has a sedative (tranquillising) effect, interactions with other medicines that also have a depressant effect on the central nervous system. These include, for example sleeping pills and sedatives as well as opiate painkillers [4] and muscle relaxants. Severe drowsiness, dizziness and an increased risk of falling may occur. Alkohol

Alcohol consumption at the same time is particularly dangerous: Studies on healthy subjects have shown that alcohol increases THC blood levels, causing psychotropic effects to reinforce each other. THC and alcohol together lead to greater impairment than taking one substance alone. Side effects of alcohol such as nausea and vomiting, loss of control and the risk of mental disorders (e.g. anxiety disorder) increase [11]. Therefore alcohol consumption is strongly discouraged.

Pharmacodynamic interactions can also have a positive benefit. Severe chronic pain is often treated with opiate-based analgesics, which can have unpleasant effects such as constipation in long-term use. There is also a risk of tolerance development and physical dependence. Various studies have shown that Cannabinoids enhance the analgesic effect of opioids. Many patients can reduce the dose of opioid-based painkillers and reduce side effects.

In preclinical studies morphine in combination with THC showed an effect at concentrations 3.6 times lower than in trials with the opiate alone [12]. This effect was also shown in clinical studies: In an Israeli study published in 2018 with a total of 2,736 people over 65 years of age, the patients reported an average pain reduction from 8 to 4 points on the numerical rating scale of 0 – 10 after 6 months of cannabis therapy. In addition 18.1 percent of the patients were able to reduce the dosage of their opiate medication or stop taking the medication altogether. [13]

THC can negatively affect the cardiovascular system and lead to short-term side effects such as palpitations (tachycardia) and increased blood pressure (hypertension). Blood pressure drops after rapid changes of position (orthostatic hypotension) for example when the affected person stands up quickly, are also possible, as THC reduces the resistance of the blood vessels [14]. Sympathomimetics, i.e. drugs that put the body on heightened alert such as amphetamine derivatives, can additionally increase the side effects on the heart [10]. Caution is also advised with other drugs that affect the heart such as antihypertensives. Patients with cardiovascular and heart diseases should therefore be closely monitored by a doctor during cannabis therapy.

In 2013 a scientific team carried out a pharmacokinetic study on 36 volunteers with cannabinoids in the form of a spray containing THC and CBD and the three drugs rifampicin, ketoconazole and omeprazole [6]:

Influencing the effect of other medicines by medicinal cannabis

Interactions between medicinal cannabis and drugs with a narrow therapeutic range (e.g. antiepileptic drugs, anticoagulants) are particularly critical. These must be precisely dosed in the patient and individually adjusted, as even slight overdoses can lead to severe side effects.

The number of studies on the effects and metabolism of cannabinoids is currently limited. Many of the studies dealing with interactions were conducted with healthy subjects and are therefore not directly transferable to ill persons. Further clinical studies are needed to better understand the processes in patients. Therefore it is all the more important to determine the dose at the beginning of a cannabinoid therapy according to the principle “start low and go slow”. Thus low doses of THC or CBD are started and the cannabinoid dosage is slowly increased, depending on the response of the person concerned and the side effects that occur, until the optimal amount is reached [10].

Patients taking many medications should be aware that some drugs can increase the psychotropic effects of THC and cannabinoids can alter the effects of other medications. Therefore it is important that patients inform doctors and pharmacists about all preparations including over-the-counter medicines and food supplements, so that possible interactions can be recognised.