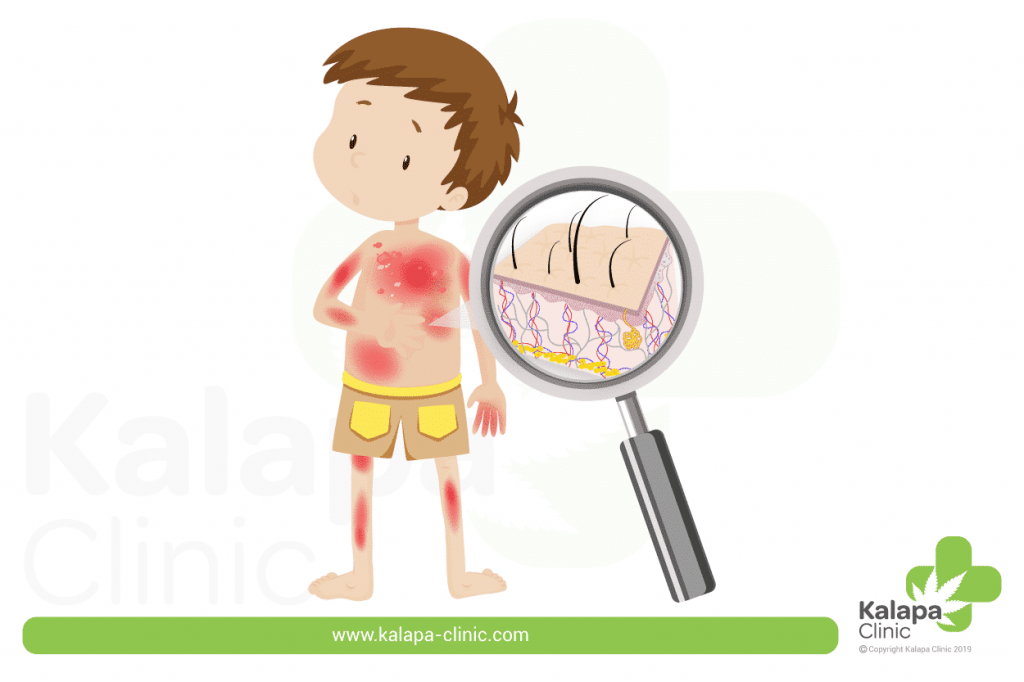 Epidermolysis Bullosa (EB) is a skin disorder characterized by skin fragility, also known as “onion skin”. However, the disease can manifest to many different organ systems.

Epidermolysis Bullosa is caused by defects in anchoring proteins between the epidermis and dermis, predisposing patients to bullae, blisters, scars and leading to mechanical fragility skin. There are four subtypes of EB based upon which proteins within the dermal-epidermal junction are affected: EB simplex, juntional EB, dystrophic EB, and Kindler syndrome.

Cannabidiol (CBD) is the second most abundant cannabinoid compound found in the cannabis plant after Tetrahydrocannabinol (THC). CBD has no psychotic effects and it has become a popular alternative for people with chronic pain, anxiety and sleep disorders.

In humans, two main cannabinoid receptors have been identified, known as CB1 and CB2, which interact with CBD. CB1 is mainly expressed in brain and spinal cord, while CB2 receptors are expressed in the immune cells. In addition, CBD is also a direct agonist of vanilloid receptors, which are involved in processes like pain, inflammation and body temperature regulation.

Cannabinoids agents have been shown to indirectly inhibit proliferation of cultured human epidermal keratinocytes and to stimulate their apoptosis. In fact, treating acne vulgaris with cannabinoids by decreasing the proliferation of human sebocytes has also been documented. Finally, CB1 receptor has also been implicated in regulating epidermal differentiation by inhibition of transglutaminase, protein kinase C and activation protein-1.[2]

Topical use of CBD Oil in Children with Epidermolysis Bullosa

Sublingual administration of CBD and THC in Adults with EB

CB1 and CB2 receptors have been detected in human skin and on presynaptic terminals of primary afferent pain circuits and are co-localized with mu-opioid receptors in the spinal cord junction for peripheral nociceptive neurons. In addition, CB2 activation on keratinocytes produces a blocking response to certain harmful reactions through the release of endogenous opioids in the peripheral tissues.[4]

In 2018, an article published in the British Journal of Dermatology studied three patients with epidermolysis bullosa who were treated with sublingual THC and CBD, four times per day, along with their previous treatments. All three patients reported an improved pain score, reduction in overall analgesic drug intake and a decrease in pruritus. [5]

So far, the reported investigations on patients with EB are showing the potential that cannabinoids have in inhibiting the proliferation of dangerous epidermal cells and inducing their apoptosis, in addition at ameliorating the pain and pruritus perception. Nevertheless, further investigation and controlled studies are needed in order to properly evaluate the dosages and the correct administration method specific for treating this illness.