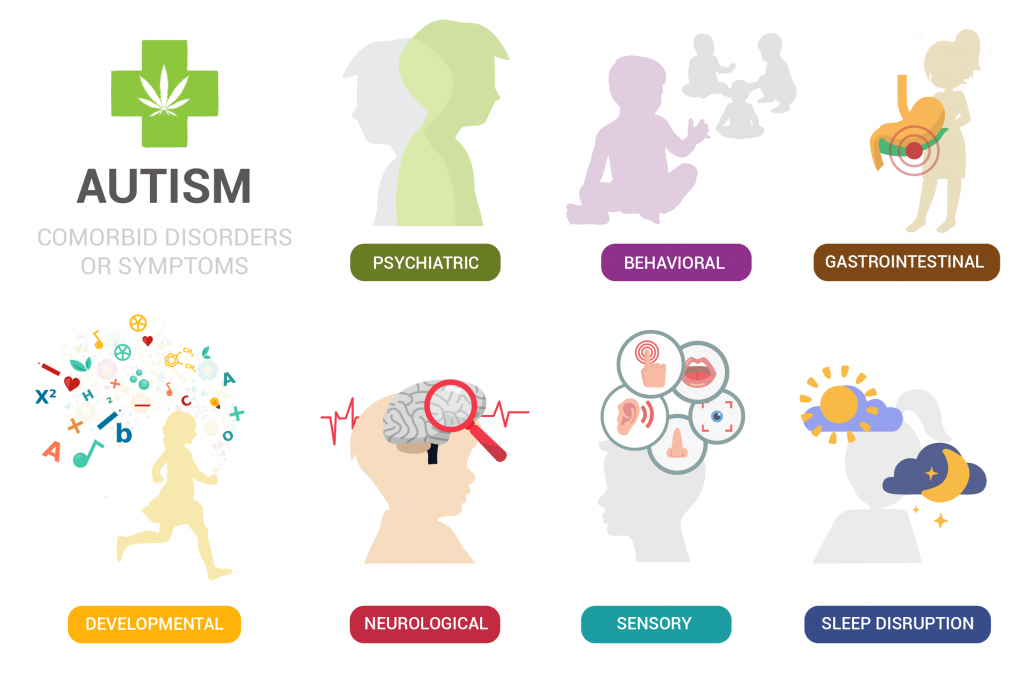 Autism spectrum disorders (ASDs) are a class of neurodevelopmental disorders, defined by qualitative impairments in communication and social functioning, frequently accompanied by repetitive and stereotyped patterns of behavior and interest, usually notice by the parents during the first three years of their children´s life. With this article, we want to reflect on how medicinal cannabis could help improve the quality of life of autistic children.

Symptoms that are detected in autistic children

Comorbid disorders or symptoms are:

The ASD included Asperger´s syndrome, pervasive developmental disorder not otherwise specified and autism. Around 1 in 150 children have an ASD, with males especially being affected. Because the disorders is multifactorial and highly genetic, there is no cure[1]. Genes that affect synaptic maturation are implicated, altering connections between neurons and resulting in bad processing of information in the brain[2].

About 40% of children with ASD do not respond well to conventional medical treatment. Consequently a high percentage of parents are seeking alternative help such as the two main cannabinoids found in the cannabis plant: cannabidiol  (CBD) and tetrahydrocannabinol (THC). Cannabinoids activate the endocannabinoid system and regulate a variety of physiological and cognitive processes.

A THC-based drug (Dronabinol) showed an improvement in the management of treatment-resistant self-injury behavior in adolescent patients with intellectual disability at 6 month follow-up[3]. While CBD has antipsychotic, anxiolytic, antioxidant, anti-inflammatory and antiepileptic properties. Besides is no psychoactive.

In 2018, a brief report about canabidiol-rich cannabis in children with Autism Spectrum Disorder was published in the Journal of Autism and Developmental Disorders. The author showed in the study that after given cannabis as an adjuvant therapy, considerable improvement in behavior (61%), anxiety (39%) and communication (47%) problems was reported.

In the study, the treatment was a mix of CBD and THC, in a 20:1 ratio, respectively, taken via sublingual two to three times a day over 2-4 weeks, with doses up-titrated to effect and tolerability. Adverse events were resolved by adjusting the evening dose and the age of the patients was 5-18 years old. Bases on the promising results, the researcher suggest further investigation in controlled studies[4].

In 2019, another scientific report was published on Nature, the aim of the study was to characterize ASD patients receiving medical cannabis treatment in autism and to describe its safety and efficacy. The data analyzed was collected between 2015 and 2017 as part of the treatment program or 188 ASD patients.

The treatment was based on cannabis oil applied under the tong, containing 30% CBD and 1.5% THC, given three times a day in majority of the patients (5 to 19 years old). After six months of treatment, 155 patients were in active treatment and 93 (60%) have been assessed: 28 patients (30.1%) reported a significant improvement, 50 (53.7%) moderate, 6 (6.4%) slight and 8 (8.6%) had no change in their disorder. Quality of life, sleep, concentration, seizures, positive mood and ability to dress and shower independently were also improved after six months.

The most common concomitant chronic medication on the intake were antipsychotics, antiepileptic, antidepressant and hypnotics. Antipsychotics  was taken by 55 (33.9%) patients, and at 6 months, 11 (20%) patients stopped taking this medication. In general, a decrease in drugs consumption was reported in 23 (34.3%) patients. Restlessness was experienced, as the most common side effect in 23 (25.2%) patients. The reason for stop doing the treatment were: side effects and no therapeutic effect.

In conclusion, cannabinoids appears to be safe, effective and well tolerated to relieve symptoms associated with ASD. Mechanism of the cannabinoids effects may involve GABA and glutamate transmission regulation, as well as vasopressin and oxytocin release. An excitation and inhibition imbalance of GABAergic and glutamatergic signaling in different brain regions is characterized by ASD. On the other hand, vasopressin and oxytocin are neurotransmitters that strengthen social interaction, reduce repetitive behavior, control social information and improve emotional recognition. CBD was found to enhance oxytocin and vasopressin during social activities, according to literature[5].

The present studies provides a good evidence of the patients and parents satisfaction with the treatment. However, findings should be interpreted with caution, more studies are important for better understanding of the medical cannabis effects on autistic children and ASD patients in general.

[3] Kruger, T. & Christophersen, E. An open label study of the use of dronabinol (Marinol) in the management of treatment-resistant self-injurious behavior in 10 retarded adolescent patients. Journal of Developmental & Behavioral Pediatrics 27, 433 (2006).