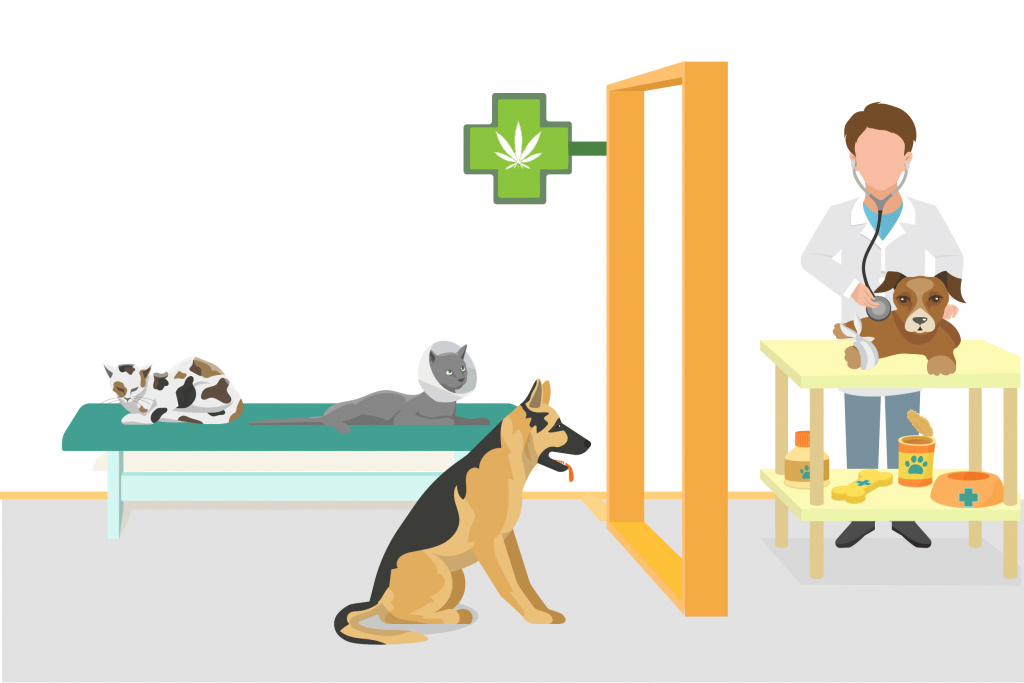 For any animal lovers out there, our pets are just like another member of the family. Unfortunately, conventional medication doesn’t always work, and just as we do with our human loved ones, we go that extra mile to find an alternative for our pets. Thankfully, compounds in the cannabis plant are gaining traction as a safe, natural way of treating conditions such as arthritis, epilepsy and anxiety in our pets. Let’s take a look at what we know so far about medical cannabis for pets.

As humans we like to think we’re a cut above the rest of the animal kingdom. But turns out we have a lot more in common than we think. For instance, we all share an endocannabinoid system (ECS) – the vast cell communication network comprising special cannabinoid receptors (CB1 and CB2), and cannabis-like chemicals called endocannabinoids (anandamide and 2-AG). The purpose of the ECS is to create homeostasis and it regulates most key biological functions including sleep, appetite, reproduction, memory, mood, and the immune system.

Receptors in the ECS are also activated by chemicals found in cannabis called cannabinoids, of which perhaps the most well known are Tetrahydrocannabinol (THC) and Cannabidiol (CBD). However, while humans have enjoyed both the recreational and medicinal benefits of the psychoactive cannabinoid THC, dogs and THC do not mix so well. This is because canines have a higher density of CB1 receptors in their brains, making them overly sensitive to THC’s intoxicating effects.

As a result, when we talk about medical cannabis for pets, we’re really dealing with CBD, which doesn’t bind with CB1 receptors, instead, activating a host of non-ECS receptors related to pain, inflammation, anxiety, nausea, and even seizure reduction.

Right now, there are a growing number of specially formulated pet CBD products on the market such as CBD edibles (chews, treats and biscuits), as well as CBD capsules and CBD oils for dogs and cats.

Research about medical cannabis for pets

Most studies are trying to find whether medical cannabis might be effective treatments for human diseases. That said, before any drug can be tested on humans, it must be tried on animals first; usually mice or rats. However, just because THC or CBD might have health benefits in rodents, that doesn’t mean that this would necessarily translate to other animals such as dogs and cats.

Unfortunately, because of the schedule 1 classification of cannabis and its derivatives, this research has been severely restricted, and it’s only in the last two years that any clinical trials for cannabinoids and animals have happened.

CBD and osteoarthritis in dogs

Using CBD oil to treat dogs with chronic pain or arthritis is one of the most popular reasons people give cannabinoids to their pets. That’s why the team at Cornell University chose to investigate CBD’s safety and analgesic efficacy in dogs last year (1). The results were promising. They found administering 2mg per kilo weight twice daily of whole plant CBD oil, decreased pain and caused greater activity in the canine subjects.

Encouragingly, no short term side effects were noted, making CBD potentially a safer alternative to the non-steroidal anti-inflammatory drugs (NSAIDs) generally prescribed to pets with osteoarthritis.

CBD and epilepsy in dogs

For thousands of years, the ability of cannabis to lower seizures in patients has been noted by doctors. Fast forward to the modern medical age, and one of only two approved cannabis based medications is targeted at reducing seizures in children with rare types of epilepsy.

Unfortunately, epilepsy can also affect our pets, with dogs in particular suffering from idiopathic epilepsy. Like humans, they don’t always respond to the conventional medication prescribed by their vet and their owners turn to CBD oil as a natural alternative.

McGrath found that 89% of the dogs treated with CBD experienced a reduction in the frequency of seizures.

Just like us, our pets can suffer from anxiety, low mood, and fear of abandonment. Unfortunately they can’t always tell us the root of their suffering, and so finding a way to calm their nerves with minimum side effects is an attractive proposition.

Following the popularity of CBD oil for anxiety in humans, many pet owners are turning to the non-psychoactive cannabinoid for their stressed out animal companions. While positive anecdotal reports abound, so far no clinical trials on pets have been conducted.

If you are considering giving CBD oil to your pet, it is a good idea to consult first with your Vet. There’s a fair chance they will know very little about cannabinoid medicine, but it’s always advisable to discuss using CBD oil with them, particularly if your dog or cat is taking other prescribed medication. Alternatively, CannaVets specialises in medical cannabis for pets and offer consultations remotely.

Did you like the post about medical cannabis for pets? Give us some feedback! This post has been done based on existent research to the date of publication of the article. Due to the increase in studies based on medical cannabis, the information provided can vary over time and we’ll keep informing in further writings.