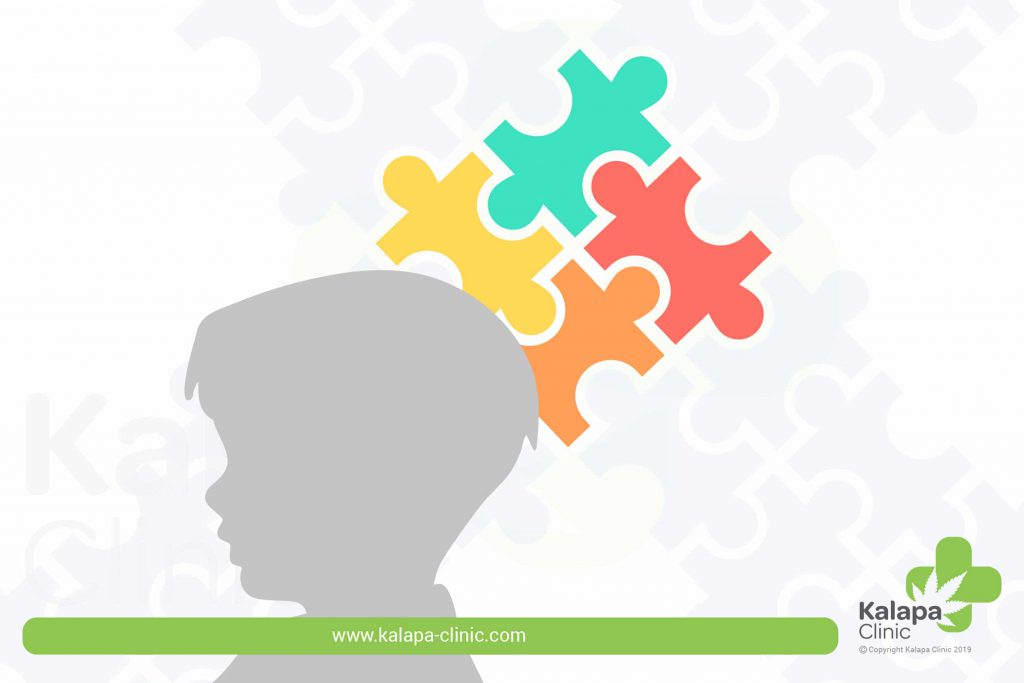 Autism is a neurological developmental disorder. Experts often refer to it as Autism Spectrum Disorder (ASD), as there are different forms of the disorder. Medical cannabis could be an option to relieve accompanying symptoms such as sleep disorders, anxiety or anger.

What is autism spectrum disorder?

All developmental disorders begin in childhood and continue into adulthood. However, the severity of the disorder can vary greatly. Most autistic people have severe impairments and need support and help throughout their lives. However, some can also have relatively independent and autonomous lives.

Most autistic children show deficits in their intellectual development. However, it is also typical that they have a special talent in one area, for example playing the piano or mathematics.

The main characteristics of autism are:

People with autism show little interest in social interactions and can have difficulties in trying to do so. They tend to close off on people. It can be difficult for them to assess social and emotional cues, as well as difficulties with self-expression. Therefore, their reactions to others’ feelings are often inappropriate or uncomfortable to people. This can lead to a stereotype that autistic people are unapproachable.

Communication is often limited. They can show abnormalities in speech and delays in speech development. Due to impairment in the use of language, a mutual conversation is often not possible. 50% of people with early childhood autism do not acquire language at all. [2]

The interests and activities of people with ASD are also restricted. Their behaviour is characterised by compulsive or stereotypical behaviour. This means that everyday tasks are performed according to a fixed routine. Changes in these routines can lead to major problems. But also, for example, new decoration in the living room can cause a strong negative reaction in autistic people. Sometimes uncontrollable motor movements such as rocking or waving are added.

Other limitations and concomitant diseases

In addition to the disorders mentioned above, people with autism often suffer from a number of other accompanying disorders, such as anxiety, sleep disorders, epilepsy, eating disorders, aggression and self-harming behaviour. [3]

The development of autism not yet been clarified until today, despite extensive research. There is scientific consensus that the disorder has nothing to do with the emotional coldness of parents. Additionally, the assumption that the MMR vaccination (measles, mumps, rubella) is involved in the development of autism has also been refuted. This explanation goes back to a study from 1998, which was officially withdrawn in 2010.

All forms of autism are based on neurobiological causes. These include genetic factors, but brain dysfunction or brain damage could also play a role. [5] In addition, experts suggest that various environmental influences, such as a rubella infection during pregnancy, may play a role.

The therapy used in children with autism depends on the form of autism and the severity of the disorder. In general, it is important that treatment begins in early childhood. Today, doctors use multimodal therapy – for example behavioural therapy, occupational therapy and language training. Advice and training for parents also play a major role.

So far, there is no therapy that effectively treats the main symptoms of autism spectrum disorder. Today, only the comorbidities are treated i.e. the diseases or disorders that occur in addition to autism. For example, antiepileptic drugs are used for epilepsy or antidepressants for depression and anxiety.

The endocannabinoid system (ECS) in our body is involved in regulating social reactions, perceptions, concentration, seizures, body movements and much more. Since an effective treatment of the core symptoms of autism is still lacking, researchers are increasingly interested in cannabinoids. The focus is mainly on cannabidiol (CBD).

Cannabis could be used both as a monotherapy and as a complementary treatment. In other words, it could be used for therapy in the accompanying conditions as well as in the treatment of the main symptoms of autism. The mechanisms by which cannabinoids modulate the ECS could be the key to this. [6]

In 2018, researchers investigated which data is available on cannabinoids among young patients with ASD.

The result of their work: “Cannabidiol seems to be a candidate for the treatment of ASD. At present, however, there are no convincing pre-clinical or clinical data showing efficacy and safety of cannabinoid treatment in ASD patients.” [7]

CBD as a therapy to alleviate the symptoms of ASD

There still insufficient studies and research on the effect of cannabinoids on autism spectrum disorder. Therefore, further research is needed to better understand its effects. However, it has already been shown that CBD in particular can be effective as a treatment for the secondary diseases of autism – such as sleep disorders, anxiety and epilepsy. [8]

Dr. Aran, together with colleagues in Israel, conducted a study with 60 children suffering from autism. Cannabidiol-rich cannabis was used in treatment. The result: In 61% of the children, the behavioural outbursts decreased significantly. The treatment also showed a positive effect on anxiety and communication problems. Among the undesirable side effects, however, were sleep disturbances (14%), irritability (9%) and loss of appetite (9%). The research team concluded from these results that CBD is a promising treatment option for behavioural problems in children with ASD. [8]

Another interesting aspect of this study is that not only did the symptoms improve, but in some children the basic medication could also be reduced. 82% of the participants were treated with other drugs in addition to cannabis, such as antipsychotics, mood stabilizers or benzodiazepines. After cannabis treatment, 33% of the children received less medication or a lower dose, 24% stopped taking medication and 8% received more medication or a higher dose.

Another study supports the positive evidence for the efficacy of cannabinoids in treating autism: scientists analysed the data of 188 ASD patients treated with medical cannabis between 2015 and 2017. In the majority of the patients, cannabis oil containing 30% CBD and 1.5% THC was used. [9]

The researchers conclude that medical cannabis appears to be a well-tolerated, safe and apparently effective option for relieving the symptoms associated with autism. In particular, cannabis may be helpful in the treatment of seizures, tics, depression, agitation and tantrums. Overall, more than 80% of parents reported a significant or moderate improvement in the overall condition of their child.

In summary, there is considerable evidence that medical cannabis may help in the treatment of ASD symptoms. CBD-rich cannabis drugs have especially shown positive results. However, the results of the studies are inconclusive, as not all studies show improvement for the same symptoms: “Studies revealed mixed and inconclusive findings of cannabis effects for all conditions, except epilepsy”. [6]

Researchers also point that, although medical cannabis appears to be promising in the treatment of ASD core symptoms, evidence-based recommendations are needed to ensure safety and efficacy. [6]

How exactly cannabinoids help with autism has not yet been proven by science. It is therefore important to carry out more research to better understand the effects of cannabis in ASD patients. A placebo-controlled study with cannabidivarin (CBDV) is currently being conducted in the USA to investigate the effects of non-psychoactive cannabinoids on children and young people with autism. [10] The results of this clinical study are eagerly awaited.