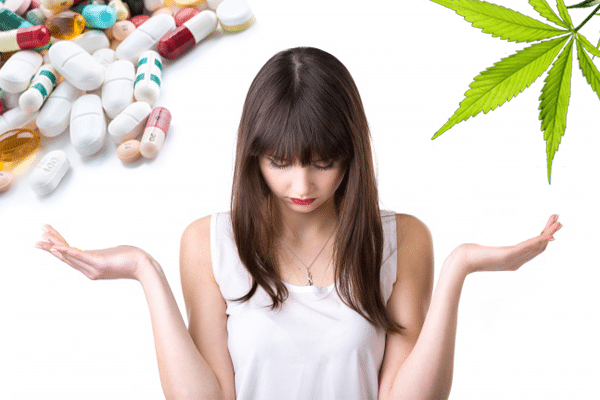 The cannabis plant has been known for complementing the effects of traditional drugs. It has also been shown that it can reduce the dose of other drugs being consumed that, after prolonged consumption, can be detrimental to the health of patients. In spite of this, it is still difficult to say that they can substitute some medicines. That is why several investigations are focusing on determining which drugs can be substituted with medical marijuana depending on the disease being treated.

In 2016, the University of British Columbia, Canada published a study analysing the pathologies of patients who used therapeutic cannabis. The findings indicated that 63% of patients used cannabis as a substitute for other prescription drugs. Specifically, 30% of them replaced pharmaceutical opiates with cannabis, 16% used it as a substitute for benzodiazepines, 12% for antidepressants and the remaining percentage with other types of medicines [1].

It is interesting that medical cannabis can replace opiates, as the latter are commonly used to treat patients with chronic pain, although there is little evidence that they are effective in treating these type of long-term diseases. Researchers at the University of Michigan, (seeing that there were previous studies associating the change in medical laws in relation cannabis with the decreasing opioid overdose in the state), decided to ask more than 200 physicians if they had ever changed their routines to prescribe one type of medication or another for their patients.

Data from November 2013 to February 2015 included changes in opioid use, quality of life, classes of medication used and side effects of medical cannabis use. Among participants medical cannabis use was associated with a 64% decrease in opioid use, a decrease in the number or drug side effects and a better quality of life (45%). After analysing all of this information, the researchers suggested that many patients with chronic pain are substituting with medicinal cannabis in order to treat their pathologies because they are seeing that the benefits of cannabis for therapeutic purposes are greater than in other classes of drugs. Patients also found that the side effects are milder than with any type of opioid or medication [2].

All of the data led to another trial being carried out, which was recently published. The study evaluated whether the properties of medicinal cannabis could replace opioids and whether it could be applied to other psychoactive substances. Members of the New England dispensary completed an online survey of their medical history and their experiences with medical cannabis. 76.7% of them indicated that they had reduced their use of opioids since they started using therapeutic cannabis. Regarding other substances 37.6% reduced their consumption of antidepressants and 42% reduced their alcohol intake. In summary, most patients reported using fewer opiates and medications, such as antidepressants, or alcohol to treat anxiety, migraines and sleep problems after commencing therapeutic cannabis therapies. [3]

While there are indications that medical cannabis could replace many drugs, these studies are looking to specify the classes of prescription drugs for which therapeutic cannabis can be a substitute. However, given the lack of regulation in some cases in obtaining extracts from the plant, further research is needed on which drugs could be substituted for medical cannabis.