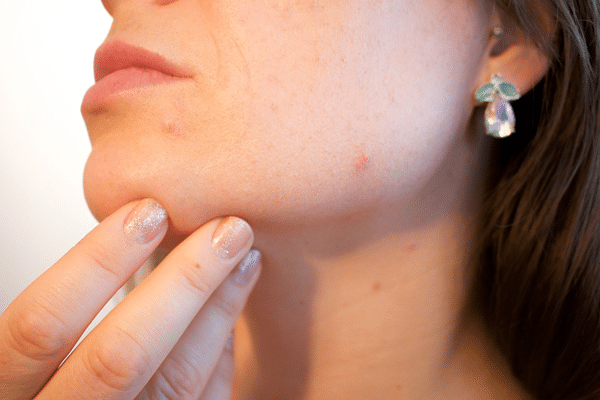 Pimples and blackheads are familiar to most young people. Acne is the most common skin disease worldwide: about 85% of people suffer from it at some point in their lives. In more than half of them the skin disease only has a slight course. However, 40% of those affected experience such severe symptoms that they need to be medically treated.

“Young people often suffer a lot from acne,” explains Prof. Dr. Martin Schaller from the University Dermatology Clinic in Tübingen. [1] Boys are more frequently affected by the problem than girls and boys also have a higher risk of developing a severe form of the skin disease. Pimples usually appear between the ages of 15 and 18, but in some people, they persist into adulthood.

Studies have shown that the cannabis active substance CBD (cannabidiol) could be a promising tool in the fight against acne. CBD has anti-inflammatory properties and can have a positive effect on sebum production. A big advantage is the good compatibility. CBD can be applied, for example, in the form of CBD oil and CBD creams.

Acne: What is that?

When we talk about acne, we usually mean acne vulgaris, because it is the most common form of the disease. There are also other rare forms such as acne inversa, acne infantum, acne tarda and acne medicamentosa.

Blackheads and pimples occur mainly on the face, but can also appear on the chest, back and upper arms.

Acne: What causes it?

Hormonal changes during puberty are responsible for the development of Acne vulgaris. The sebaceous glands are overactive, which leads to greasy, shiny skin (seborrhoea). In addition, there is an increased keratinization and thickening of the skin (hyperkeratosis). Dead skin cells clog the excretory ducts of the sebaceous glands. This results in blackheads (comedones), which can be inflamed by certain bacteria. In the course of the disease typical skin symptoms such as papules, pustules or even abscesses can develop.

Unfortunately, the inflammatory skin changes may also bring the danger of scars with them. Especially when the young people pop the blackheads and pimples themselves. Instead, those affected should have the problem treated medically.

There are different reasons as to why acne occurs. Genetic predisposition can play an important role [2], hormonal factors, especially the increase in male hormones (androgen increase) in puberty and psychological influences such as stress. However, nutrition is also an important factor. The Professional Association of German Dermatologists (BVDD) therefore recommends a balanced diet with plenty of vegetables, fruit and wholemeal products. Sweets, white flour products and milk, on the other hand, are suspected to aggravate the problem. [1]

The treatment of acne requires patience. Beautiful, clear skin within a short period of time, as the advertising suggests, does not exist. According to the BVDD, those affected should prepare themselves for six months of therapy. “But then the acne went away in the majority of patients,” says Professor Schaller. [1]

The dermatologist will decide which drug to use according to the degree of severity and whether the increased production of sebum or the inflammation is predominant. In the case of light forms, ointments or creams for external (topical) application usually help. Doctors use active ingredients such as benzoyl peroxide, topical retinoids and azelaic acid for treatment.

In severe acne vulgaris, oral medication may be useful. Dermatologists usually prescribe antibiotics to fight the inflammation. Hormone preparations such as the contraceptive pill can also be used in females. Retinoids (isotretinoin) are mainly used for severe acne. However, the drug can cause severe side effects. Since it can cause serious damage to the unborn child, safe contraception during treatment must be used.

Experts warn against cleaning the skin too aggressively – this can even increase inflammation. It is better to remove excess sebum and skin flakes with a soap-free and gentle washing lotion. Especially young skin should not be over-cared-for with creams – a light oil-in-water-based moisturizer is better. Make-up should also be as light and non-comedogenic as possible.

Medical Cannabis: Can it help in fighting against acne?

The endocannabinoid system (ECS) regulates various physiological processes, including the cell growth of the skin. The skin has numerous cannabinoid receptors, also in the sebaceous glands and hair follicles. As early as 2014, a study from Hungary examined the effects of Cannabidiol (CBD) on sebaceous gland function. CBD is the main non-psychotropic cannabinoid of the plant Cannabis sativa.

The study concludes that CBD can regulate the overproduction of tallow. For researchers, it is clear that the cannabis active substance has the potential to be a promising therapeutic agent for the treatment of acne vulgaris due to its “anti-inflammatory effects”. [3]

Despite intensive research, there is still no acne remedy that combats the various causes of the disease and at the same time has few side effects. This is explained by the authors of the study [3]. Therefore, the endocannabinoid system of the skin “seems to be a promising choice in the search for new therapeutic options.

The scientists conclude that CBD fights acne in three ways:

CBD is generally well tolerated and has already shown that it hardly causes any side effects.

In a study from 2016, the scientists examined other cannabinoids to find their effects on acne vulgaris. The investigations showed positive results for CBC, CBDV and THCV – previously relatively unknown ingredients of cannabis. These cannabinoids are promising. Due to their remarkable anti-inflammatory effects, they could become effective and safe new tools in the treatment of skin inflammation. [4]

There are various CBD products on the market, which differ in their application. CBD oil (with a maximum THC content of 0.2%) is sold in pharmacies, some drugstores and other shops. CBD oil is taken orally and dripped under the tongue. More and more popular are cosmetics with cannabidiol, such as CBD creams or lotions, which are applied externally to the skin.

However, it should always be noted that over-the-counter CBD oil or CBD creams can only have a supporting effect. Especially if the affected persons suffer from more than just a few pimples, the treatment should definitely be placed in medical hands – even if young people shy away from going to the doctor. Particularly in severe forms of the skin disease, there is a risk of scars that last a lifetime without professional treatment.

Acne is not a life-threatening disease, but for many sufferers it could mean a severe limitation in their quality of life. The skin disease is characterized by an overproduction of sebum and inflammation of the sebaceous glands. In the search for a remedy with a positive effect on the various causes of suffering with the least possible side effects, researchers have investigated the effect of medical cannabis on the skin.

It turned out that the non-psychotropic CBD combats the causes of Acne vulgaris at the roots. CBD has a positive effect on the sebum production of the skin and inhibits excessive cornification. In combination with its anti-inflammatory properties it could therefore be a promising aid.

However, further studies are needed before CBD can be used in medical acne therapy. An extensive study with over 360 participants, in which the effects of a topical solution with CBD were investigated, was recently completed. Experts are eagerly awaiting for the results. [5]