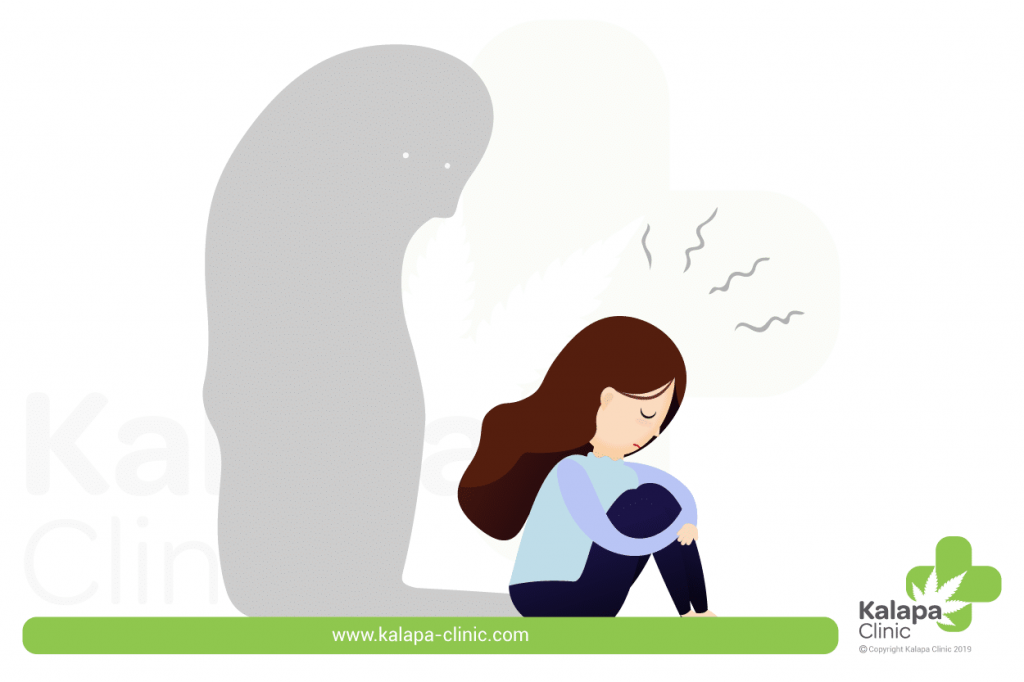 A quarter of the population in Europe will experience depression at some point in their lifetime. For those with moderate to heavy depression, antidepressants may be necessary. Unfortunately, current medication doesn’t always improve symptoms and patients can be left without any further treatment options. Thus, the hunt is on for a new type of antidepressant medication and CBD may be one of the most hopeful candidates.

The World Health Organization defines depression as “a common mental disorder, characterized by persistent sadness and a loss of interest in activities that you normally enjoy, accompanied by an inability to carry out daily activities, for at least two weeks”.

Depression often goes hand in hand with low energy, changes in appetite, anxiety, sleeping more or less than normal, difficulty in concentration, feelings of a lack of worth, hopelessness; and in more severe depression, thoughts of self-harm or suicide.

Why do some people develop depression and not others? It seems some of us are genetically predisposed to depression, but also environmental factors play a role such as chronic stress and trauma.

Depending on the degree of severity, treatment may be counselling/talking therapy, medication or a combination of both. Unfortunately though, less than half the world’s population receive treatment for depression.

While a recent meta-analysis showed that antidepressants are more effective at treating depression than a placebo, some have side effects that patients find intolerable. Antidepressants such as Serotonin Reuptake Inhibitors (SSRIs) are classed as serotonergic, meaning they modify levels of serotonin in the body. Serotonin or 5-Hydroxytryptamine (5-HT) is a type of neurotransmitter that modulates neural activity, and gives a clue as to why cannabidiol (CBD) may be an antidepressant drug of the future.

CBD is a type of cannabinoid found in the cannabis plant. Lacking any intoxicating effect, anecdotal accounts and preclinical studies suggest CBD has an antidepressant effect. Knowing that CBD activates the 5-HT1A receptor, scientists have studied the cannabinoid in animal models of depression, with the common consensus being that CBD improves depression symptoms, most likely through the activation of the 5-HT1A receptors in the brain.

In order to confirm the role of this serotonin activation, in one study, animals received a 5-HT1A receptor antagonist alongside CBD, preventing the cannabinoid from binding with the serotonin receptor. This appeared to prevent the mood-enhancing effects of CBD. As 5-HT1A receptor activation may induce antidepressant-like effect.

Another study found that alongside serotonin, CBD produced an increase in glutamate production, an excitatory neurotransmitter released by nerve cells in the brain, resulting in immediate antidepressant-like effects in the animals studied.

‘Anhedonia’, the inability to feel pleasure in once enjoyable activities is a common symptom of depression and a characteristic found in ‘depressive-like’ Wistar-Kyoto (WKY) rats. Researchers found that administering CBD showed a ‘prohedonic’ effect on the depressed rats, who demonstrated improved curiosity and motivation. They concluded: “These findings extend the limited knowledge on the antidepressant effect of CBD, now shown for the first time in a genetic animal model of depression”.

CBD, Depression and the Endocannabinoid System

Another reason why CBD appears to have antidepressant effects may lie in how the cannabinoid interacts with the endocannabinoid system.

The endocannabinoid system (ECS) is a vast network for cannabinoid receptor sites, found primarily in the central nervous system (CB1) and the immune system (CB2), but also in other systems (CB1/CB2). They are activated by lipid-based chemicals called endocannabinoids (e. g. 2-araquidonil-glicerol; 2-AG and anandamide; AEA-) which are broken down by enzymes (FAAH and MAGL) in the body. The ECS is known as a homeostatic regulator meaning it brings balance across all biological functions including appetite, reproduction, pain perception, immune function, cell proliferation, and of course, mood.

A clue to why ECS may play a key role in depression was revealed in a study on subjects with a very interesting happiness-promoting genetic mutation. They produced less of the enzyme fatty acid amide amide hydrolase (FAAH), that breaks anandamide down in the body. In animals and humans, the resulting enhanced endocannabinoid signalling improved fear extinction learning, and reduced anxiety-like behaviours.

However, the reverse was true when a CB1 blocking drug called rimonabant was developed for obesity. While rimonabant did indeed reduce appetite and lipogenesis, blocking the CB1 receptors resulted in increased incidences of mood disorders among patients. Consequently, the drug was withdrawn.

2-AG, the other key endocannabinoid, also shows signs of dysregulation in depressed states. In a study  carried out on women with depression, 2-AG was found to be significantly lower, with levels further diminishing the longer the depression lasted. Interestingly, lower anandamide levels were associated with anxiety type symptoms.

It would seem then, that a healthy functioning ECS is key to maintaining our mental wellbeing and that drugs targeting the endocannabinoid system may be novel antidepressants of the future. Which brings us to CBD.

CBD is thought to “moderately inhibit the degradation of anandamide” either by blocking FAAH itself or binding with fatty acid binding proteins (FABP) that transport anandamide to FAAH in order to be broken down. One study on patients with schizophrenia found that on administering CBD, anandamide levels were elevated and psychotic symptoms improved.

While depression and psychosis are poles apart in diagnosis and treatment, the results do at least highlight how CBD can improve symptoms related to mental illness and that the cannabinoid’s ability to increase anandamide levels may be a key factor.

Favourable anecdotal evidence and preclinical research on animals are still not enough to prove conclusively that CBD has an antidepressant effect on humans. While there have been positive results from a number of human studies on other mental health conditions such as PTSD and social anxiety, as yet there are no completed clinical trials examining CBD for depression.

However, one clinical trial using CBD for bipolar depression on 100 subjects is currently recruiting in Brazil. Patients will receive 150mg – 300mg of CBD daily over 12 weeks.

In the meantime, taking CBD for depression continues to be one of the most popular reasons people turn to CBD oil, something that will hopefully soon be backed up by clinical data.