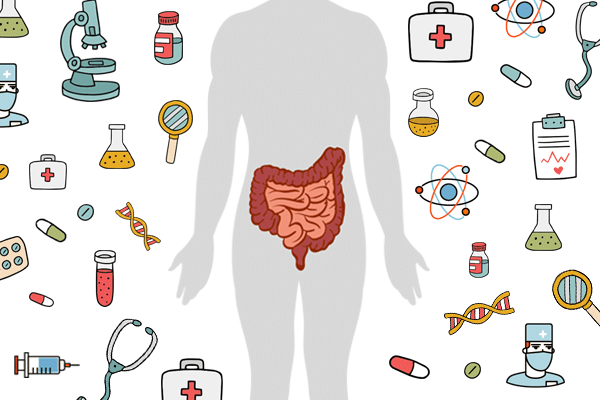 Both are long-term conditions that cause chronic inflammation in the intestine that can result in severe damage to internal organs. While ulcerative colitis only affects the large intestine and anus, Crohn’s disease can occur in any part of the gastrointestinal tract (GI), from the mouth to the anus [1].

If one of these diseases develops it directly affects the digestion of the person, the absorption of nutrients and excretion. Inflammation means that these processes cannot occur correctly, giving rise to some serious symptoms such as rectal bleeding, weight loss, and diarrhea.

The causes of IBD are not completely clear but it is known that there are some factors that increase the chances of this condition developing in a person.

The main factor is genetic predisposition but, moreover, it seems that this mixed with environmental triggers and a disturbance of the immune system can summount in the disease developing and the body attacking itself.

It is known that CBD has anti-inflammatory properties and in recent years more studies have been done to see if CBD and treatment with cannabis could help the causes and symptoms of IBD.

There are masses of CB1 and CB2 receptors within the gastrointestinal system, so naturally, researchers are curious about cannabinoids and their effect on inflammatory bowel disease. At the CANN10 Congress held in Israel last June, Dr. Timna Naftali presented the results of an observational study conducted in 2009 [2].

Of the 30 patients, 21 felt that smoking (on average) 2.4 “joints” per day (for an average time of 2.1 years) their symptoms were considerably alleviated and found signs of clinical improvement in 70% of the cases. (Naftali, 2017). She then conducted her own pilot study on people who suffered from serious Crohn’s disease, studying the effects in 11 people who carried out a treatment with THC-rich cannabis and 10 others who were treated with an extracted THC placebo.

To quantify the symptoms of Crohn’s, a tool called Crohn’s Disease Activity Index (CDAI) was created to track the progression or remission of the disease and is based on a point system related to the way in which symptoms affect the patients daily life. The trial concluded that there is a clinical benefit of using cannabis to treat Crohn’s symptoms and there are no adverse side effects. In addition, along with cannabis treatment, steroids had a saving effect. Naftali also conducted this study using Cannabidiol instead of THC, where it found almost no effect on disease activity. However, when she investigated the effect of a mixture of CBD and THC, there was also, on average, a decrease in CDAI.

Naftali also conducted a similar study in those suffering from ulcerative colitis. In this case, the study concluded that the quality of life of cannabis smokers increased and the activity of the disease decreased. It also concluded that the use of THC to treat inflammatory bowel disease is common and does not cause adverse side effects. Thus, there is already data showing that THC is clinically beneficial for people with IBD or ulcerative colitis. The researcher found that the rate of employment of her test subjects increased along with their general mood, appetite and amount of sleep. The pain decreased along with swelling and nausea. More research is needed to correctly judge the doses and percentages of THC and CBD needed to treat Crohn’s disease and ulcerative colitis. However, thanks to these studies, it is already known that cannabinoids are very promising in the treatment of inflammatory bowel disease.