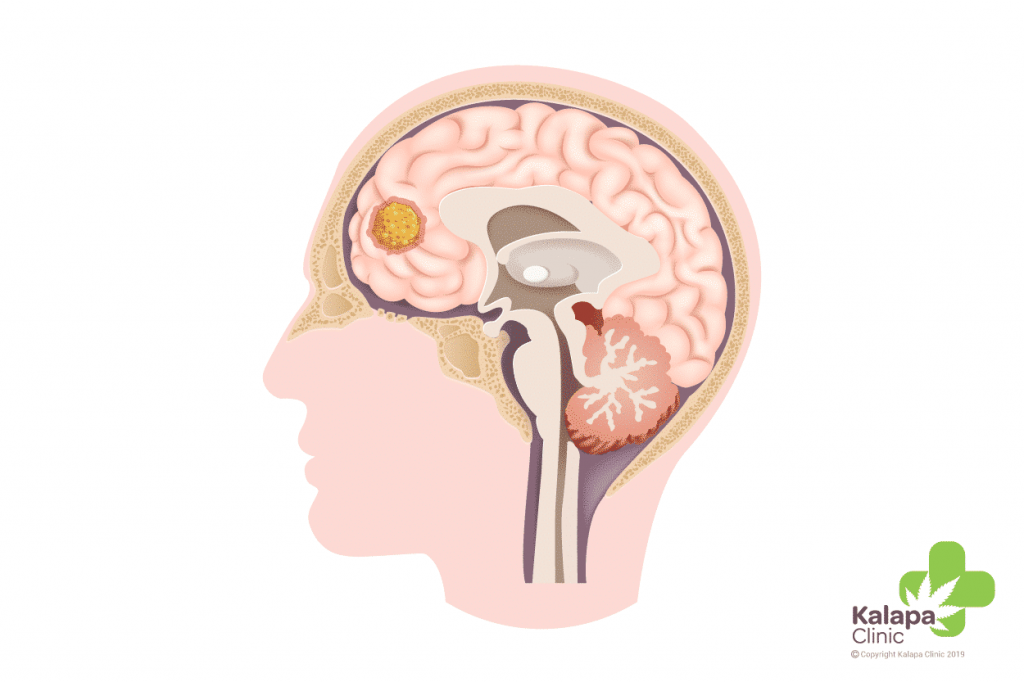 Medical cannabis is used for many illnesses such as chronic pain, multiple sclerosis, epilepsy or nausea and vomiting. But can it also be used for brain cancer (glioma)?

Glioma: The Most Aggressive Brain Cancer?

Glioma is an aggressive primary tumour of the central nervous system. Tumours arise from glial cells, which provide protection, support and a dynamic state of equilibrium. Gliomas are classified by cell type, location and grade. Glial cells include astrocytes and oligodentrocytes and is comprised of more than 90% of the brain volume.

Glioma is the most malignant brain tumour. Common symptoms include headache, vomiting, nausea and seizure. Depending on the tumour grade, treatment include resection, chemoradiation and glucocorticoids, among others. Cannabinoid therapies may be a potential additional drug in managing the improvement of these symptoms.

CB1 is widely found in the brain, while CB2 is expressed in the immune system. Both receptors are present by glial cells and by gliomas, and the activation of these receptors is involved with the regulation of cellular differentiation, function and cell viability.

In 2019, a clinical study was carried out in glioma patients at a comprehensive cancer centre in Florida regarding the use of medicinal cannabis. Self-reported data was collected in a survey. Patients were undergoing treatment for primary non-recurrent malignant glioma.

In general, users reported pain relief, nausea relief, stimulation of appetite, relief through relaxation, ability to cope emotionally, sleep aid and a decrease in seizure. Only a few patients claimed to use medicinal cannabis in order to control the growth of the tumour. However, there is insignificant scientific evidence that the growth control works in humans. Therefore, more observational research and randomized trials is needed[1].

In 2011, a preclinical study observed the effect of the combined administration of temozolomide, the first line chemotherapeutic agent for the treatment of glioblastoma, and tetrahydrocannabinol (THC), the major psychoactive ingredient of marijuana. In this article, researchers reported a strong antitumoral action in glioma cells by the activation of autophagy, a process whereby cells degrade damaged components. Moreover, a treatment with THC and cannabidiol (CBD), another plant-derived cannabinoid, also induces glioma cell death and reduces the growth of the tumour. Findings support that the combined management of cannabinoids and temozolomide could be a viable option for the management of this disease[2].

THC and Glioma: Evidence in Humans

In 2003, a clinical trial has been conducted in which nine patients diagnosed with actively growing recurrent glioma were treated with THC intratumorally (intracanial). These patients had previously failed standard management (radiotherapy and surgery) and had evidence of tumour progression.

Cannabinoids activate cannabinoid receptors and induce apoptosis of glioma cells via activation of an endoplasmic reticulum stress-related pathway and ceramide accumulation. The stress-regulated protein p8 plays an important role in this action by controlling the expression of ATF-4, CHOP and TRB3. This cascade of events triggers the activation of the mitochondrial intrinsic apoptotic pathway through mechanism that have not yet been known.

In resistant glioma tumours, the administration of cannabinoids together with endoplasmic reticulum stress inducer drugs can be beneficial. Furthermore, cannabinoids promote the survival of oligodendrocytes, neurons and astrocytes cells, suggesting that the antiproliferative action of cannabinoids is selective for brain-tumour cells.

To grow, tumours need to generate a new vascular supply for purposes of, waste disposal, cell nutrition and gas exchange, and therefore, blocking this process constitutes one of the most important antitumoral approaches currently available. Cannabinoids also diminish the presence of various tumour-progression molecules, such as Vascular Endothelial Growth Factor (VEGF), by glioma cells.

Matrix metalloproteinase-2 (MMP2) is a protein that allows tissue breakdown and remodelling during new blood vessels formation and metastasis[3]. Local administration of THC diminishes MMP2 activity and expression, in gliomas generated in mice[4].

The cell contains two proteins that promote cell division cycle, E2F1 and Cyclin A. THC has been shown to decrease these proteins, affecting glioma cells survival (in vitro)[5].

In general, the significant antiproliferative action of cannabinoids, together with their low toxicity, compared with other chemotherapeutic drugs, suggest that cannabinoid treatment might be a new additional therapy for managing glioma. However, further studies on this topic should be taken to investigate the complete molecular mechanisms of action.