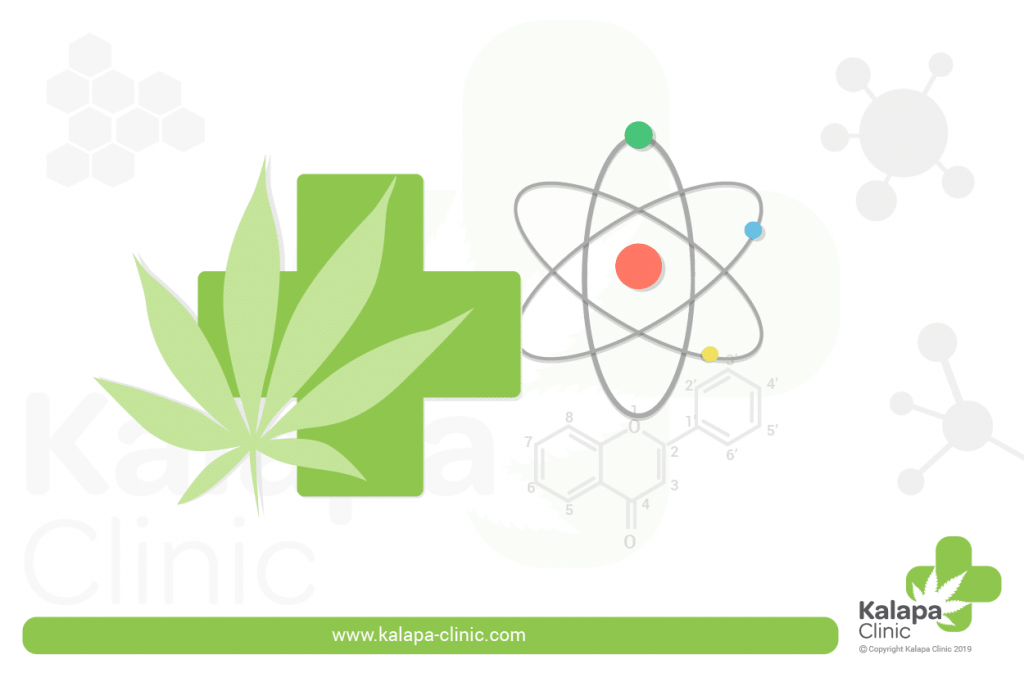 Flavonoids are components from any type of plant. They have been found to contain certain medicinal properties and are important to reach the “entourage effect” from medicinal cannabis products, which mean that the combination of both could enhance the beneficial effects.

Flavonoids can be  comprised of more than 10,000 structures and is one of the largest groups of natural compounds in plants.  It contains a wide range of pharmacological properties with inhibition or activation of specific enzymes including cyclooxygenase and lipoxygenase, chemoprevention and the detoxification of carcinogens. This is why they are mostly recognised for promoting health in both human and animal nutrition.

Additionally, flavonoids are also antioxidant agents, and could modulate tetrahydrocannabinol (THC), through a mechanism shared by cannabidiol (CBD): the inhibition of P450 enzymes (proteins in charge of THC metabolism).1

Flavonoids also contribute to the vibrant colour in fruits and vegetables.

Within the plant, flavonoids are the phenolic compounds and can be called phenylpropanoids.  These phenolic compounds can act as antioxidants in plants and protect itself against oxidative stress. There have roughly been 20 different flavonoids identified in cannabis, some of those are: Apigenin, Luteolin, Quercetin, Kaempferol, Cannflavin A, Cannflavin B (unique to cannabis), β-sitosterol, Vitexin, Isovitexin and Orientin.

Similar to terpenes (the compound which produces odours from plants), many of the flavonoid compounds have also shown to contain anti-inflammatory, neuroprotective, and anti-cancer effects. For example, Apigenin has anxiolytic properties, and inhibits TNF-α which is involved in numerous inflammatory conditions.

Cannflavin A and B also possess anti-inflammatory effects, with Cannflavin A shown to inhibit PGE-2 (a proinflammatory agent) 30 times more strongly than aspirin. 2 Additionally, an antimicrobial as well as anti-leishmanial activity has been demonstrated for cannflavin B. 3

How are flavonoids useful for medicinal cannabis?

To understand the usefulness of flavonoids in medicinal cannabis, we must first be familiar with the entourage effect.

What is the entourage effect?

Firstly, there is a reason why fruits, vegetables, whole grains and other plant-based foods contain many health and medicinal benefits.  This is the result of the synergy between the various nutrients and bioactive compounds within the food rather than one single compound.  Thus, this is how cannabis contains plenty of medicinal properties through the synergistic interactions between cannabinoids, terpenes, flavonoids and other compounds.  This synergy and interactions between the different compounds is called the ‘entourage effect’.

When the first investigations were being carried out, only the main cannabinoids would be looked at such as THC and CBD, and minor cannabinoids, terpenes and flavonoids have generally been ignored.  However, evidence suggests that these constituents play significant roles in influencing one another and working together.  This results in an extensive range of user benefits, and side effects among strains with varying ratios of these components.

There is evidence for therapeutic benefits of flavonoids and cannabinoids (such as THC, CBD, THC/CBD) in many symptoms and diseases, especially when treating chronic pain, migraines and headaches. However, more studies are needed to determine the most effective therapeutic ratios of cannabinoids, terpenes, flavonoids, and other compounds.2

In conclusion, it is can be highly assumed that flavonoids contain important properties, which can provide optimal results from medicinal cannabis. However, more research must be carried out within the non-cannabinoid compounds as they are the components that contribute to boost the benefits provided by the main cannabinoid compounds, THC and CBD.