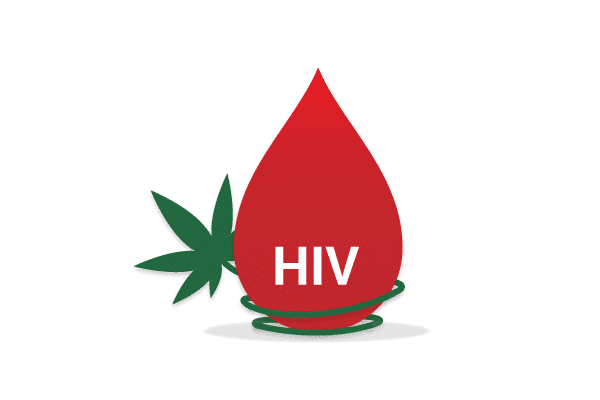 The human immunodeficiency virus (HIV) affects about 36 million people worldwide. The disease, which is transferred by contact with body fluids (e.g. blood, sperm and vaginal secretion), shows the destruction of the cells of the immune system. Since the discovery in the 1980s, there have been about 35 million people that died. The fact that the WHO region of Europe is the only continent where the number of new infections continues to rise shows that HIV is not a less serious problem today.

Although intensive research is being carried out, HIV is still neither curable, nor does it have a Vaccination. Still, there is the highly active antiretroviral therapy (HAART), which is a form of treatment that gives patients a largely normal life and a high level of life expectancy. Nevertheless, a number of complaints remain with HIV patients that are struggling with the disease. In this context cannabis proved to be a helpful remedy.

A large number of studies exist in which the potentially positive effects of a Cannabis treatment for people with HIV have been documented. In this way cannabinoids could, for example, reduce muscular and musculoskeletal disorders, as well as the loss of appetite and also nausea. Cannabis can also have positive effects in terms of depression, a side effect that many patients are struggling with and it could also help maintain mental performance.

In addition to these already known positive properties of cannabinoids in HIV treatment, a study by researchers from the University of Michigan has now published another discovery: Cannabis could counteract a decrease in mental performance, which occurs in about 50% of all patients during the course of the disease.

It is assumed that this decrease in cognitive abilities is partly due to a chronic inflammation in the brain, which occurs because the immune system is permanently stimulated.

The University of Michigan study found that cannabinoids, due to their anti-inflammatory properties, are able to reduce the number of inflamed white blood cells (monocytes). This reduction in inflamed cells could, as the researchers conclude, slow down or even completely stop the inflammatory process in the brain. In this way, HIV patients could be able to keep their cognitive abilities significantly longer.

The researchers came to the results by taking blood samples of 40 HIV patients who have stated whether or not they use cannabis. After the isolation of the white blood cells of each donor, they determined the number of inflamed Cells. The result: Cannabis-using patients had a clearly lower level of inflamed cells than non-consumers.

Michael D. Rizzo, co-author of the study says that the connection between cannabis and inflammation in the brain will be further explored. This is expected to lead to not only further findings for HIV treatment, but also for others that brain-related diseases, such as Alzheimer and Parkinson.

This study will include 400 participants and will not only be documenting the effects of cannabis on the brains of the patients for over 5 years, but is also expected to state whether cannabis may even help to kill the HIV virus.