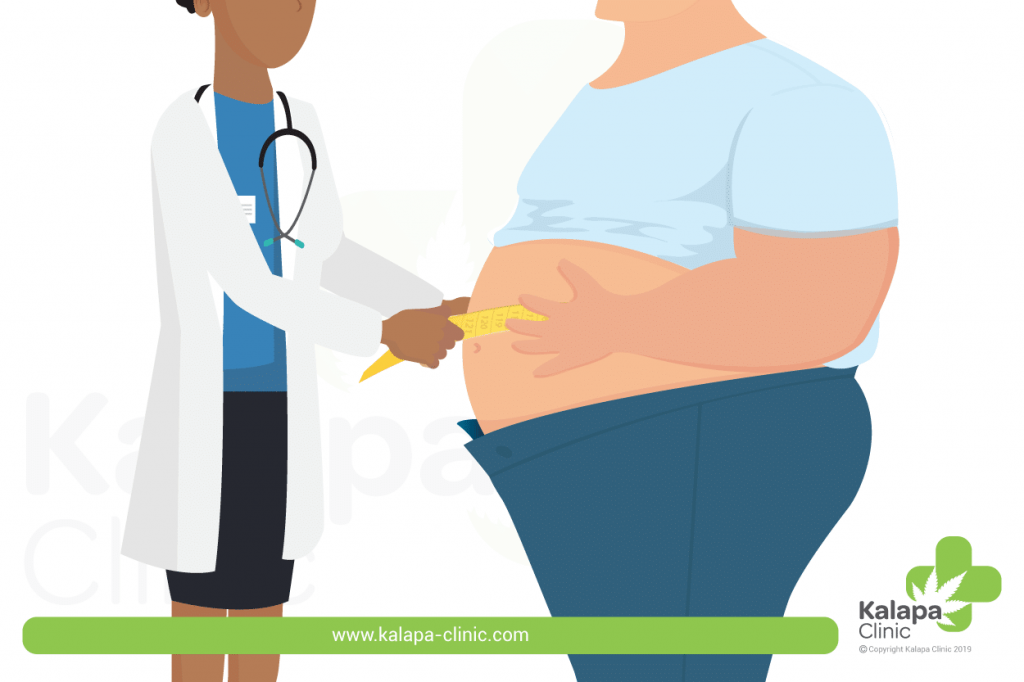 Over the last decades, obesity has turned into a major public health issue, since excess weight gain causes an increased risk for various chronic diseases including diabetes, cardiovascular diseases, musculoskeletal disorders or some cancers.

Prevalence of obesity in adults, children and adolescents has become an important worldwide health problem. As stated by the World Health Organization (WHO), the last official figures (2016) speak volumes: 1.9 billion adults are overweight, 650 million adults and 124 million under 18 are obese. Additionally, since 1975, obesity has nearly tripled around the world.

What is overweight and obesity?

According to the WHO, “overweight and obesity are defined as abnormal or excessive fat accumulation that represents a risk to our health. Obesity and excess weight in adults are commonly classified by the Body Mass Index (BMI), defined as a person´s weight (kg) divided by the square of his height (m2) “:

BMI is strictly related with adipocytes[1]. Adipocytes are cells that play a key role in energy balance. When an adipose tissue grows, adipocytes increase in size and number[2] . Nowadays, we can distinguish up to three types of adipose tissues:

– White adipose tissue (WAT) is responsible for storing energy in the form of fat, and also for the secretion of hormones.

– Brown adipose tissue (BAT) helps energy into heat and leads to caloric expenditure, especially under prolonged cold exposure (19°C), such as during the winter. Thanks to the protein UCP1 located the inner mitochondrial membranes, a protons flux occurs across the inner mitochondrial membrane and heat is generated, with no need for the complex production of ATP (an organic chemical that provides energy). In fact, an animal’s exposure to cold leads to an increase of BATs. In contrast, obese people have reduced BATs. BAT is made up of a high density of mitochondria (supplier energy to the cell).

– Beige adipose tissue (beige ATs) is also capable of dissipating energy as heat but under external conditions such as exercise and stress and internal conditions in thyroid hormones and adrenoreceptor activators. As well as BAT, beige adipocytes also express UCP1. Beige ATs are transitional adipocytes, meaning they can convert from WAT to BAT after a stimulus. This change in the type of adipose tissue is considered as a potential new therapy against obesity.

The endocannabinoid system (ECS) has shown to be involved in regulating energy metabolism, body temperature and inflammation.

Moreover, the effects of the CB2 receptor have also been studied. Adipocytes in obese subjects express low level of UCP1. However, after having stimulated CB2, that level significantly increases, following a higher energy expenditure. In contrast, inhibiting the CB2 receptor may increase food intake. Furthermore, CB2 has the ability of enhancing the change of WAT into BAT[3]. 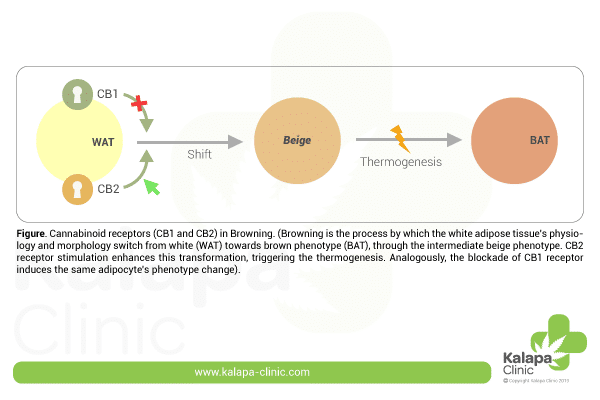 The impact of the Western diet on the endocannabinoid system

Recent studies showed that an increment of omega-6 fatty acids in diet promotes obesity. Omega-6 fatty acids are precursors of anandamide (AEA) and 2-Arachidonoylglycerol (2-AG), two of the main endocannabinoids that activate CB1 and CB2.

Overstimulating CB1 leads to increased caloric intake, diminish metabolic rates, and disrupt the ECS. Both omega-6 and omega-3 compete for the same enzymes. Consequently, since the amount of omega-6 is proportionally higher than the amount of omega-3, the majority of those enzymes will then be used by omega-6 fatty acids. This factor provokes an abnormally production of AEA and 2-AG, resulting in the overstimulation of CB1 receptors.

Therefore, a combination of omega-3 supplements and cannabinoids could then represent an interestingly potent treatment for obesity, as it could decrease AEA and 2-AG synthesis (omega-3 actions), and at the same time it could decrease the density of CB1 expression (Tetrahydrocannabinol actions), leading to a reduction in sensibility to AEA and 2-AG arising from a diet rich in omega-6/omega-3[4]. 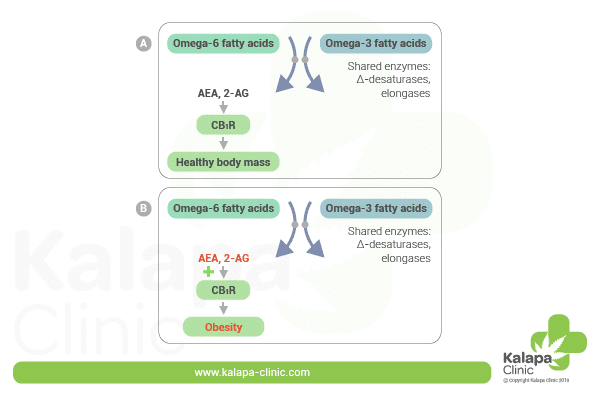 In fact, it has been highly documented that chronic cannabis users present reduced BMI. 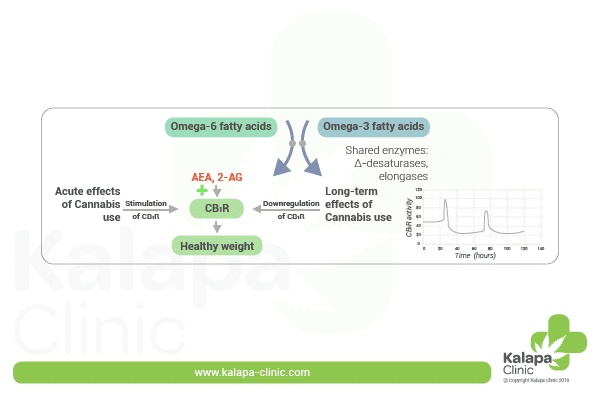 Chronic cannabis use leads to a reduced BMI

Cannabis is well known for increasing appetite. However, the results from a national 3-years prospective study in the USA showed an increased cannabis intake is associated with a lower BMI. This could be explained by the fact that chronic cannabis use leads to a decreased density of CB1 expression which results in a decreased impact of the high quantity of AEA and 2-AG.

Another explanation could come from the immunomodulatory role of CB2. Its anti-inflammatory effects could help to reduce the inflammation of adipose tissue associated with obesity. Yet, further studies are needed[5].

Current treatments against obesity include lifestyle changes, medications and surgery. In light of the current data available, blocking CB1 by using its antagonists may be an efficient way to address obesity. However, adverse psychological side effects have been observed after using CB1 antagonist “Rimonabant”. Those side effects can be accounted for by the blockade CB1 located in the central nervous system. Consequently, the current challenge is to develop CB1 antagonists that would not cross the brain blood barrier while keeping the potential therapeutic efficacy[6].

In summary, a varied and balanced diet together with a healthy lifestyle are the best ways to avoid overweight problems. However, a better understanding of the endocannabinoid system may be a source of hope as cannabinoid-based treatments may prove effective and may limit the very serious health problems that result from it.

[6] Hirsch, S. et alt. Cannabis: From a Plant That Modulates Feeding Behaviors toward Developing Selective Inhibitors of the Peripheral Endocannabinoid System for the Treatment of Obesity and Metabolic Syndrome.Toxins vol. 11 (5), 275. 15 May. 2019, doi:10.3390/toxins11050275