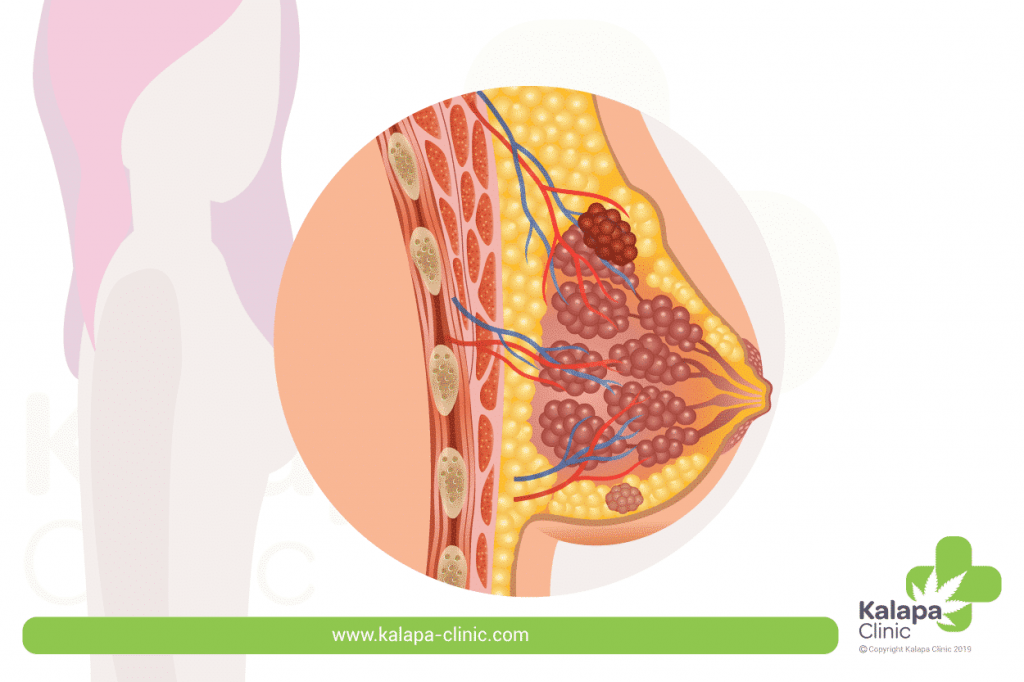 Breast cancer, also known medically as breast carcinoma, is a malignant tumour in the breast. It is by far the most common form of cancer in women. In Germany, statistically one in eight women will develop breast cancer during their lifetime. It is the most frequent cause of death by cancer in the female population. Men can also get breast cancer. However, this is very rare and only occurs in about one in 800 men.

Medical cannabis is used in the treatment of breast cancer patients to relieve symptoms such as pain, nausea and loss of appetite. However, there are also some promising studies which suggest that cannabinoids might be able to cause the death of cancer cells.

Older women are more likely than younger women to be affected by breast cancer. The risk increases with age: On average, a woman is 64 years old at diagnosis. However, almost three out of ten people who are diagnosed with breast cancer are younger than 55 [1]. From around 70 years old the risk decreases again.

The exact causes of breast cancer are still unknown – as with many other types of cancer. But doctors define different risk factors that can be divided into three groups:

Women who have had their first menstrual period very early as girls and their last before menopause very late are at risk of developing breast cancer due to this long hormonally active period. Few and late pregnancies or even childlessness are further risk factors.

The use of hormone replacement products to treat menopausal symptoms is also believed to increase the risk of breast cancer, especially if it is prolonged and combined oestrogen-progestin intake is taken. Hormonal contraceptives (“the pill”) are suspected of slightly increasing the risk.

Some breast carcinomas are due to an increased genetic risk: If close relatives have breast or ovarian cancer, the risk of developing the disease increases. Mutations (changes) in the genes of BRCA1, BRCA2 or PALB2 are particularly responsible for this. There are also other breast cancer genes, but their influence seems to be less significant.

Risk factors: lifestyle and others

In addition to old age and being female, very dense mammary gland tissue is also puts you at risk. Furthermore, being overweight, a high-fat diet, diabetes mellitus type II and lack of exercise have a negative effect. Alcohol and smoking are also suspected to increase the risk of breast cancer.

A tumour in the breast is often felt by the affected woman herself or the gynaecologist as a lump that cannot be moved. Breast cancer symptoms can also include changes in the breast such as skin retraction, redness or skin oedema. Changes in breast size or discharge from the nipple are also potential signs.

In addition to the palpation, the physician can use ultrasound (sonography) of the breast and X-ray (mammography) to make a diagnosis. However, by far not every change in the breast is malignant. Benign lumps are more common. If the gynaecologist wants to be sure, he will do a biopsy, where tissue is removed and examined in a laboratory.

Since the chances of recovery from breast cancer depend greatly on how early the tumour is detected, women should consult their gynaecologist for routine preventative examinations. In addition to the palpation examination, experts recommend mammography screening from the age of 50. The costs are covered by statutory health insurance.

The treatment of breast cancer is very individual. It depends on many different factors, both in relation to the cancer and the patient. For example, the treatment plan depends on the type of tumour and how much it has already spread in the body. The age of the affected woman, her hormone status and possible other diseases are also taken into consideration.

A cancer therapy is multimodal – it consists of several components. An operation is indispensable in most cases. In the past, this often meant a radical removal of the breast, nowadays it is often possible to preserve it. The operation is usually performed immediately after the diagnosis is made. However, sometimes doctors also carry out chemotherapy first in order to reduce the size of the tumour so that it can then be removed more easily by surgery.

In principle, the following treatment options are available for breast cancer:

Medical cannabis: help with the side effects of chemotherapy

Many cancer patients benefit from the use of cannabinoids in several ways.  For example, cannabis has been shown to reduce tumour pain. It can also alleviate the severe side effects of chemotherapy: Often the cancer patients concerned suffer from nausea, vomiting, loss of appetite and insomnia. Cannabinoids have been used here for a long time to improve quality of life. The mood-lifting (antiresignative) effect of THC also plays an important role here.

In Germany, the finished drug Canemes is currently approved for the treatment of adult cancer patients with nausea and vomiting as a result of chemotherapy. The active ingredient nabilone contained in Canemes is a fully synthetic variant of delta-9-tetrahydrocannabinol (THC).

Studies indicate that cannabinoids, in addition to their ability to counteract the severe side effects, may also be able to complement the therapeutic options of cancer treatment. In 2018, Professor Dr. Burkhard Hinz and Dr. Robert Ramer from the University of Rostock prepared a systematic review on the antitumour behaviour of cannabinoids in which they summarised the results of the available studies on this topic [2]. The researchers concluded that cannabinoids are of interest as possible systemic cancer drugs.

Findings from laboratory studies suggest that cannabinoids can act at different levels and have important effects. This is where cannabidiol (CBD) has a prominent role. The authors of the study wrote:

“Particular scientific interest has been attracted by non‐psychoactive cannabinoids such as CBD, which has been demonstrated to exert a broad array of anticarcinogenic properties (…)” [2]

Among the anticancer properties of cannabinoids are:

The relationships are complex, but it is important to note that novel cannabinoid-based drugs might block the metastasis of malignant cells. Thus, there is the possibility that “these substances may serve as feasible add‐on options” to the currently used chemotherapies, as said by Hinz and Ramer.

Therefore, many scientists today consider cannabinoids to be a promising agent in the treatment of cancer – and “not only as palliative agents, but also as anti-tumour drugs” [3]. Two of the cancers for which cannabinoids have shown a high anticancer effect are breast and prostate tumours.

In the UK, scientists investigated the potential benefits of CBD for cancer patients. In return, 119 people with advanced cancer received pharmaceutical grade synthetic CBD. The result of the study: 92 percent of the people showed positive reactions, such as a reduction in tumour cells or a reduced tumour size [4].

Treatment with CBD oil lasted at least six months, and many patients took the drug longer. A shorter period did not show any significant positive effects. No side effects were observed.

Patients with various forms of cancer, including women with breast cancer, took part in the study. In some cases, the size of the tumours in these patients was significantly reduced. The authors of the study therefore conclude: “ Pharmaceutical-grade synthetic cannabidiol is a candidate for treating breast cancer and glioma patients.”

A new role of CBD in the fight against cancer was investigated in 2018 in a scientific study by the London Metropolitan University. The researchers showed in vivo that cannabidiol inhibits the release of exosomes and microvesicles (EMV) in prostate cancer, hepatocellular carcinoma and breast adenocarcinoma. This inhibition of EMV makes cancer cells more sensitive to chemotherapeutic drugs and can limit cancer growth. The effect was dose-dependent. [5]

The researchers conclude that CBD can be used to make cancer cells more susceptible to chemotherapy and to optimize it. It might be possible that cannabidiol may help to ensure that even a lower dose of chemotherapy is sufficient for treatment and achieving the desired success.

However, not just CBD is of great interest for science, cannabidiol acid (CBDA) is now also becoming the focus of attention. Researchers at Hiroshima International University in Japan have found evidence that CBDA may be able to inhibit the production of a particular enzyme. This would make it a relevant tool in the fight against cancer. [6] However, further research is needed before the links are scientifically clarified.

What is the significance of the entourage effect?

The “entourage effect” describes the fact that a mixture of several plant substances has a higher biological activity than an isolated pure substance. The cannabis plant contains a large number of phytocannabinoids and terpenes, which play a decisive role in this synergistic effect.

A scientific, pre-clinical study by the University of Madrid concluded that the entourage effect could also have an effect in the fight against breast cancer. The researchers compared the effect of pure THC with that of a cannabis preparation. They found that this drug was more potent than pure THC in cell culture and animal models of breast cancer. [7]

For the researchers, these results suggest that standardised cannabis drugs should be considered as part of breast cancer therapy instead of pure cannabinoids.

Cannabinoids have a recognized role in cancer treatment today. They can help with tumour pain, insomnia and depression. They can also relieve the side effects of chemotherapy, such as nausea, vomiting and loss of appetite. As an add-on therapy, cannabinoids thus make an important contribution in improving the quality of life of cancer patients.

However, cannabinoids are also of interest in science for the primary treatment of cancer. Cannabinoids have been shown to reduce the proliferation and spread of cancer cells. Breast and prostate cancer are two cancers in which cannabis has been shown to have a high anticancer effect. However, the mechanisms responsible for this have not yet been fully clarified.

Further scientific research is needed to make the best use of cannabinoids in the fight against cancer. However, their potential is already clear – not only in palliative therapy, but also in use against cancer cells.