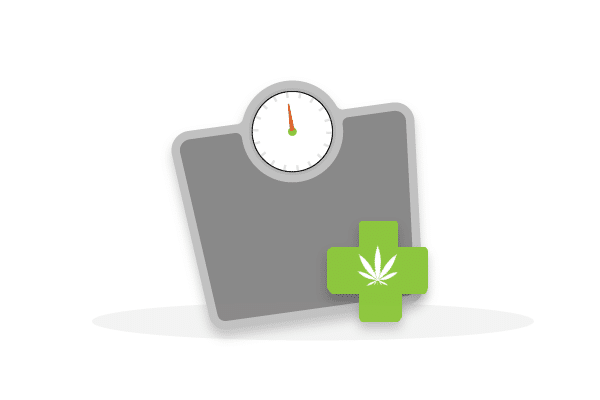 Why is it that people who consume marijuana regularly, “stoners”, are always portrayed as skinny even though smoking marijuana is known to increase ones appetite, normally known as “the munchies”?[1] It is a stereotype however there are some truths behind it.

On average, people who consume marijuana regularly have a lower BMI and a smaller waistline than those who don’t and it may just be a coincidence but the 6 healthiest states in America all have some kind of medicinal marijuana reform. Here’s why…

Both Cannabidoil (CBD) and ∆(9)-tetrahydrocannabinol (THC), the two most prominent cannabinoids in the marijuana plant, have a direct effect on your appetite. CBD and THC both interact with the endocannabinoid system that is found all over our bodies, a system that regulates the metabolism and storage, nutrient transport and the intake energy from food. They regulate these things through the CB1 receptors that are found everywhere throughout the body.

THC locks itself onto the cell receptors in the brain that are related to triggering Ghrelin (the hunger hormone) therefore increasing hunger and appetite. A study conducted in 2015[2] on Diet-Induced Obese rats found that THC did increase the rats appetites but it stopped further weight gain, even with a high fat diet. This is due to the reduction of energy intake in the digestive system.

Along side this CBD has been found to be an appetite suppressor. It does not stop you eating entirely but it can make you feel fuller sooner. A British study on this subject, using rats, found that in comparison with rats that were given cannabis molecule Cannabinol, the rats that were given CBD consumed considerably less food over the study period[3] (Farrimond, JA. 2012). The conclusion of this study was that CBD can reduce food intake but more research needs to be done on its anti-obesity effects.

As with any weight loss plans, exercise and diet is the key to success. Only taking CBD oil would not work entirely on its own, but it has been suggested that certain strains of marijuana (ones higher in CBD which are most Savita’s) can help a person focus and be more active. As THC makes food more palatable too, smoking can help people who are having trouble adjusting to a new diet.