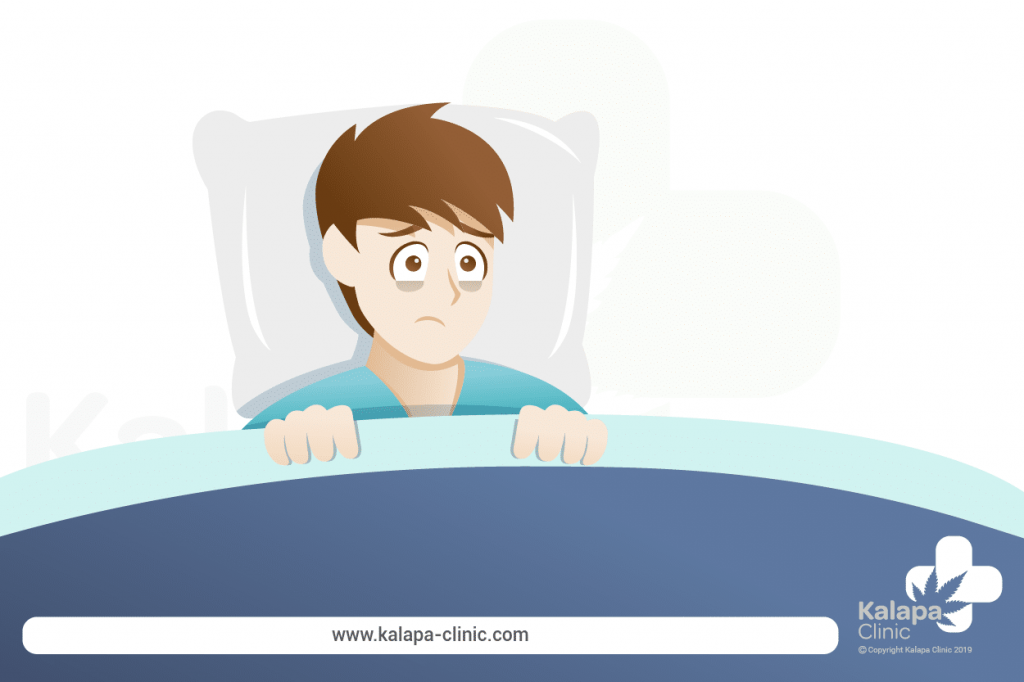 Not being able to rest in the evening, brooding, wallowing, waking up in the night and not being able to get back to sleep – insomnia is a serious problem for many people.

Anyone who does not sleep well at times feels tired, unfocused and less able to perform during the day. If the sleep disturbances persist, there is even a risk of serious health problems. Can medical cannabis help with sleep disorders? We shed light on the current state of science.

The number of people suffering from insomnia has been growing steadily for years, with sufferers often at times having the sleep disorder for years. A recent study from the UK also shows that depression, anxiety and insomnia have increased significantly since the corona pandemic compared to the time before the pandemic. [3]

Women were also rated as having 4% worse quality of sleep than men on average and 5% more were suspected of suffering from insomnia according to the aforementioned report. They sleep more lightly, wake up more often at night and then take longer to fall asleep again. Reasons given for this include taking care of small children and the snoring of their partner. Men are more likely to report sleep-related breathing problems.

Sleep is one of the basic human needs like breathing, eating or drinking. It is essential for our health and well-being, because in this phase our body “recharges” itself.

The most common sleep disorders include insomnia and parasomnia. The former are difficulties in falling asleep and/or sleeping through the night, or sleep that is not restful. As a result, those affected suffer from daytime tiredness and feel impaired in their everyday life. Parasomnias are unwanted events that happen when people fall asleep, sleep or wake up, such as sleepwalking or night terrors.

If a person suffers from insomnia, there are many different possible causes:

Other physical illnesses that can cause a so-called secondary sleep disorder include cardiovascular disease, multiple sclerosis, Parkinson’s disease, pain, fibromyalgia or restless legs syndrome. In general, all conditions that are associated with chronic pain have a high potential to disturb sleep. Conversely, chronic sleep disorders also seem to increase sensitivity to pain.

Barmer’s data show that every fourth patient with a diagnosed sleep disorder also suffers from a mental illness. These include depression, depressive moods, anxiety disorders, psychosis or schizophrenia. It is often difficult to determine what is the cause and what is the consequence. In addition, there is usually not just one cause behind sleep problems, but several factors play a role together.

The first main phase, NREM sleep, consists of four phases. Waking sleep is the first phase. It is the transitional phase between waking and light sleep and lasts only a few minutes. The body prepares to fall asleep, brain activity gradually decreases and the muscles relax. This is the most fragile phase of sleep, and waking up is very easy.

After this first stage, the body goes into a light sleep, in which awakening is less frequent. Body temperature gradually drops, as do brain activity and eye movements.

Then, in stages 3 and 4, which are very similar, we reach the so-called deep sleep. This is the most restful part of sleep and the area where it is most difficult to wake up.

The last stage is REM sleep (Rapid Eye Movement or paradoxical sleep), which lasts an average of 10 minutes during the first cycle to reach 1 hour in the last cycle. Its name comes from the paradox that occurs during this phase, in which signs of deep sleep (paralysis of the body) and signs of awakening (intense brain activity, rapid eye movements, irregular breathing) are observed. REM sleep is often associated with the dream phase. [5]

A short period of sleep deprivation already leads to symptoms such as difficulty concentrating, reduced responsiveness and impaired judgment. Severe sleep disorders that persist over a longer period of time can have negative health consequences. For example, if sleep is permanently poor, the risk of developing depression increases. The general susceptibility to stress increases and the risk of high blood pressure, heart attack and heart failure increases.

Therapy – how to treat sleep disorders?

There are numerous methods to promote healthy sleep. The most important measure here is good sleep hygiene. By this, doctors mean a range of behaviours that can help people with sleep problems and prevent sleep problems from developing.

Measures for sleep hygiene include:

People should exercise regularly during the day, but avoid strenuous exercise in the evening. Relaxation techniques such as progressive muscle relaxation after Jacobson’s relaxation technique, autogenic training or yoga can also have a positive effect and prepare the body for sleep.

Many people who suffer from nervous insomnia can be helped by over-the-counter sleeping pills. Phytotherapeutic drugs that are supposed to help people fall asleep include valerian and balm. They are very popular as natural alternatives, but they do not help everyone.

If you have persistent sleep problems, you should see your doctor. Your doctor will be able to talk to you and do a physical examination to find out the possible causes. This alone is important to rule out serious illnesses that could be the cause of insomnia. Because of the high risk of dependency, sleep-inducing drugs should be prescribed with restraint and only for a short time if possible. When doctors prescribe sleep medication, these are benzodiazepines, non-benzodiazepine hypnotics and antidepressants.

“Many patients take these and other sleeping pills for years, although adverse effects can occur and the effects of long-term use have hardly been studied. (…) Psychiatric drugs may reduce symptoms in the short term, but in the long term they can become addictive and increase sleep problems. [6]

Even over-the-counter sleeping pills from the pharmacy are not without danger and should not be used by patients for self-treatment.

Cognitive behavioural therapy is an interesting alternative to psychotropic drugs. Only a few (up to about eight) therapy sessions are necessary. It is also largely free of side effects and enables the patient to help themselves. [6]

The aim of cognitive behavioural therapy for insomnia is to break through the thought patterns that hinder good sleep. The therapy usually starts by giving people important information about their sleep, for example that their sleep patterns are individual and that it is not unusual to wake up for a short time. Especially for older people, waking up several times a night and waking up early in the morning is a common phenomenon. In addition, sleep hygiene, behaviour and habits are discussed during therapy. [6]

Cannabis, especially THC and CBD, can have a calming and relaxing effect on the body. Are cannabinoids also helpful for the use in sleep disorders?

A new, randomised, double-blind clinical trial specifically investigated the effectiveness of a medical cannabis product in the treatment of chronic insomnia. The scientific study by the Centre for Sleep Science at the University of Western Australia shows that cannabis therapy is effective and safe. [7]

Patients who took part in the study and were treated with medical cannabis fell asleep more quickly and for significantly longer. After waking up, they went back to sleep more quickly. It is particularly interesting to note that treatment with cannabis led to significant improvements in quality of life. This included the feeling of being rested after sleep and feeling less tired and stressed. Overall, the participants felt that they “functioned better” [7].

A scientific review from 2019 examined the studies on cannabis and sleep available to date. These were mainly trials that looked at the use of medical cannabis in the treatment of chronic conditions like multiple sclerosis, post-traumatic stress disorder (PTSD) and chronic pain.

The results of the review show that cannabinoids can improve the quality of sleep, reduce sleep disturbances, and shorten the time people fall asleep. [8] Many of the trials evaluated had a positive effect, but the researchers criticised the small sample size and the fact that sleep was only studied as a secondary problem associated with another disease.

A review paper published in 2017 summarised the state of research on cannabis and sleep until 2014. The results show that cannabidiol (CBD) may have a therapeutic potential for treating insomnia. The publication also makes it clear that tetrahydrocannabinol (THC) has the ability to reduce the time it takes to fall asleep. At the same time, however, there is a risk that the drug might affect sleep quality in the long term. [9]

Scientific studies have found preclinical and clinical evidence that CBD can be beneficial in neuropsychiatric conditions, including epilepsy, anxiety and schizophrenia. There is evidence that CBD has a calming effect on the central nervous system [10]. There is therefore great interest in the active substance CBD (in the form of CBD oil, for example) as a treatment for a wide range of disorders.

A recent study from the USA investigated whether CBD contributes to the improvement of sleep and anxiety states. The study involved 72 adults who suffered from both anxiety and sleep disorders.

The results of the scientific study show that within the first months in 80 percent of the test persons (57 patients) the anxiety decreased and remained decreased. The sleep values improved within the first month in 48 patients (66.7 percent), but fluctuated over time. CBD was well tolerated by all but 3 patients. The study indicates that cannabidiol may have a positive effect on anxiety-related disorders and related sleep problems.

Conclusion: Cannabis and its effect on sleep disorders

The cannabinoids THC and CBD can improve the quality of sleep, as various recent studies have shown. However, most of the available studies do not primarily focus on sleep disorders. Instead, they are research studies on various other diseases that are associated with non-recuperative sleep. Furthermore, the number of participants in the studies is often small.

Controlled clinical studies that focus primarily on the effects of cannabis in sleep disorders are therefore necessary. In this way, factors such as dosage and dosage form could also be better taken into account in order to achieve a positive outcome in the use of cannabis for sleep problems.