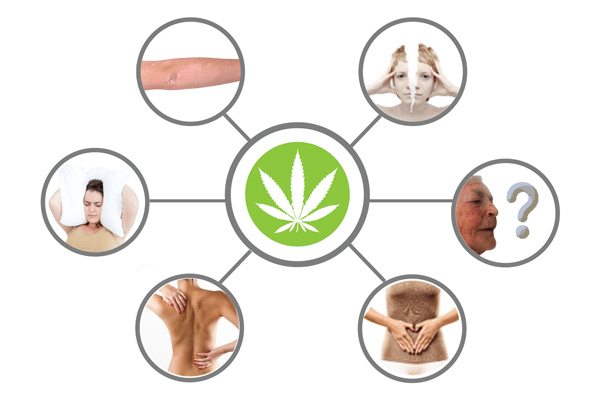 It has been confirmed that tetrahydrocannabinol (THC) and cannabidiol (CBD) are two components of the cannabis plant that bring about the most health benefits. The studies published to date have shown that many types of pain that exist can be treated with medical cannabis. There are therefore more and more countries that want to change their legislations in order to be able to legalise medical cannabis and other products derived from the plant.

Fibromyalgia: “With only a family of molecules we can treat both pain and sleep disorders, as well as mood… in order to achieve overall improvement” commented Dr. Mariano Garcia de Palau, a cannabinoid-based treatment expert at Kalapa Clinic. Sleep disorders and mood changes are part of the symptoms of fibromyalgia, as is chronic pain.

Alzheimer’s: According to the explanations of Dr. Garcia de Palau “the treatment of Alzheimer’s with cannabinoids might seem paradoxical considering that the loss of immediate memory is one of the main symptoms of the disease … But it is the neuroprotective and antioxidant effects of medical cannabis that prevail”. Until now, studies have shown that cannabinoids protect the cognitive system in order to avoid inflammation: “The use of cannabinoids for Alzheimer’s shows very interesting effects: one can see an important anti-inflammatory effect at the lower of inflammatory foci that are found in the cerebral cortex”, according to the professor.

However, as with fibromyalgia, pytocannabinoids can fight other lesser-known symptoms of Alzheimer’s: “With the use of THC and CBD we can treat patient’s mood changes such as agitation and insomnia as well as being able to increase appetite” according to the doctor.

Dr. Mariano García de Palau explains that “medical cannabis to treat this type of pain provides an analgesic effect of the fruit of synergy between THC and CBD. CBD possesses very useful anti-inflammatory and spasmolytic effects which are effective in combatting menstrual pain”. In addition, cannabinoid-based therapies do not interact or cause unwanted effects in relation to contraception.

Endometriosis: This disease is correlates with the menstrual cycle and hormones. The origin of this pathology remains unknown but researchers are aware that the pain usually peaks during menstruation and intercourse. “The use of cannabinoids for endometriosis causes three interesting effects: analgesic effects, which occurs due to the combination of THC and CBD, anti-inflammatory effects from CBD and an spasmolytic effect which is very important for treating pain” commented Dr. Mariano García de Palau in relation to the treatment of endometriosis with phytocannabinoids.

Epilepsy: Epilepsy is a disorder that comes from a malfunctioning of a group of neurons, which can affect both children and adults. It is characterised by epileptic seizures, which can occur sporadically at different frequencies and intensities, depending on the sufferer.

“CBD possess anticonvulsant, antioxidant and anti-inflammatory properties in neuro inflammatory cases” explained the doctor about the use of cannabinoids to treat epilepsy. “Cannabinoid treatments for refractory epilepsy provide interesting results, since we can reduce both the frequency and the intensity of seizures in most cases”. Moreover in the case of children, cannabinoid treatments have proved very effective in epilepsies resistant to other treatments. In cases such as these, the doctor stated that “with CBD treatments we are able to improve both verbal comprehension and response to stimulations, aptitudes, and in most cases also academic results”.

Psoriasis: This is another disease that can be treated with medical cannabis. It causes inflammation in the skin as well as redness, bumps, pain and/or itching. It cannot be completely cured but topical cannabinoid products can help to relieve and control it.

“For psoriasis, cannabinoids such as CBD can have anti-inflammatory and anti-pruritic effects” explains Dr Mariano García de Palau. “Mast cells are cells that act as mediators during the inflammatory process, it is possible that cannabinoids slow down the recruitment of these cells, which would determine the effect on the itch and the anti-inflammatory effects” continues the professor. “There are many endocannabinoid system receptors on the skin, which can be activated with the use of topical cannabinoids”.