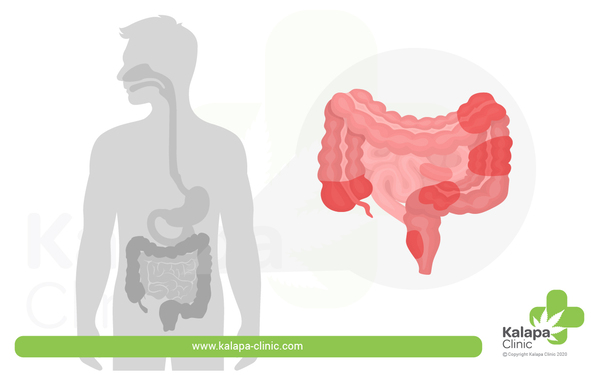 Chronic inflammatory bowel disease (IBD) is a collective term for Crohn’s disease (MC), ulcerative colitis (CU) and a few lesser-known forms. Those affected have to struggle with persistent diarrhoea, weight loss, severe abdominal pain and loss of performance. The suffering is often enormous. Studies show that tetrahydrocannabinol (THC) and cannabidiol (CBD) can alleviate the symptoms of IBD and improve the quality of life of patients.

In addition to the most common chronic inflammatory bowel diseases, Crohn’s disease and ulcerative colitis, there are also rarer forms such as microscopic colitis [3]. The causes and risk factors of most IBD are currently unknown. Scientists believe that many factors are involved. These include genetic and environmental factors such as diet, the gut microbiome (gut bacteria) and the immune system [10]. Depending on which parts of the gastrointestinal tract are affected, different symptoms may occur.

The number of patients with inflammatory bowel disease is increasing worldwide. Between 1990 and 2017, the number of people affected rose from 3.7 million to over 6.8 million [1]. In Germany it is estimated that 420,000 to 470,000 patients suffer from IBD [2]. As the disease is a risk factor for colorectal cancer, effective treatment is important.

Crohn’s disease and ulcerative colitis usually start in young adulthood, but can occur at any age.

The inflammatory changes can also appear outside the gastrointestinal tract. Inflammation of the joints, skin and eyes can occur. Both genetic risk factors and environmental influences can favour MC and CU. Characteristically, the symptoms occur in relapses. This means that phases of the disease alternate with phases with few symptoms, so-called remission phases [4][5]. Remission is understood to be a temporary or permanent reduction in symptoms. However, there is no cure, i.e. relapses can occur with a flare-up of the symptoms.

Since IBD manifests itself through non-specific symptoms such as abdominal pain and diarrhoea, doctors have to rule out other diseases such as infections or irritable bowel syndrome in order to make a diagnosis. This involves blood and stool tests as well as imaging procedures. Patients with IBD have elevated levels of inflammation in their blood and stool. The (bloody) diarrhoea often causes anaemia with symptoms such as severe fatigue. An increase in the protein calprotectin in the stool is characteristic. Calprotectin is found in immune cells which migrate more into the intestinal mucosa in IBD. In addition an infection with Clostridium difficile must be ruled out, a normally harmless intestinal inhabitant which can multiply strongly after therapy with antibiotics and cause infectious colitis.

Using imaging techniques such as ultrasound or magnetic resonance imaging (MRI), the doctor can examine the intestine in detail. During a colonoscopy the mucous membrane is examined from the inside with an endoscope. The examiner pushes a flexible tube equipped with a camera to the affected parts of the intestine. Tissue samples of the mucous membrane with inflammatory changes can also be taken with a small forceps [6].

The medicine treatment of IBD depends on the affected bowel segments and the course of the disease. Doctors treat MC and CU according to a step-by-step scheme, starting with mild therapies and moving on to highly effective medications and surgery. Regular examinations are indispensable, as the course of the disease varies from person to person and cannot be predicted.

Acute attacks of Crohn’s disease are treated with corticosteroids, such as the active ingredient budesonide, to quickly reduce the inflammation. Depending on the severity of the attack and the localisation of the inflammation, steroids are used in various forms: suppositories, clysms and foams act locally in the intestine. Steroids taken orally affect the whole body. If patients do not respond to steroids, they are examined to see if local mucosal changes such as abscesses are present. Therapy is intensified with immunosuppressive drugs such as infliximab (anti-TNF-alpha antibody), azathioprine or methotrexate. These drugs inhibit the activity of the immune system and thus the inflammation. This achieves a remission, i.e. a weakening of the acute symptoms.

Alternatively, surgical treatment can also be useful. The goal is to achieve remission with steroids and immunosuppressants. Since a new relapse can occur at any time, long-term therapy is initiated afterwards so that the attacked mucous membrane can heal and the quality of life improves. Because of the severe side effects such as osteoporosis, weight gain, steroid diabetes and skin changes, steroids are not considered for remission maintenance. Immunosuppressants are therefore used for long-term use, although it must be noted that patients are more susceptible to infectious diseases due to the suppression of the immune system and the drugs can have further side effects, some of them serious, depending on the active substance [7].

In ulcerative colitis, an acute episode manifests itself with typical symptoms such as bloody diarrhoea, pain and disturbances during bowel movements. If only the rectum is inflamed, it is first treated locally with mesalazine (5-aminosalicylic acid). If this is not effective, it can be combined with locally acting steroids and the oral intake of mesalazine. In severe relapses cortisone is also used orally. After remission has been achieved the corticosteroid should be discontinued and long-term therapy with mesalazine continued. The drug is applied orally or rectally depending on the pattern of the disease. In therapy-resistant courses or malignant mucosal changes, surgical removal of the diseased colon can be useful [8].

The endocannabinoid system (ECS) of the digestive tract forms CB1 and CB2 receptors. The CB1 receptor, which is mainly activated by the psychotropic cannabinoid THC, occurs in the intestine on two large nerve plexuses that perform different tasks:Auerbach-Plexus (Plexus myentericus):

The anti-inflammatory effect of cannabinoids is mediated among other things via CB2 receptors that are located on white blood cells (e.g. macrophages, plasma cells) and in the lamina propia, a connective tissue layer directly under the intestinal epithelial cells. These immune cells have the task of recognising potential pathogens and foreign substances from food and making them harmless [9].

Mechanism of action of cannabinoids in IBD

THC reduces the motility of the intestine by binding to CB1 receptors in the Auerbach’s plexus. The secretion of digestive fluid by the intestinal glands is also reduced. Thus the cannabinoid counteracts diarrhoea. In addition THC has pain-relieving (analgesic) effects via two pathways: Via CB1 receptors in the brain and spinal cord and by inhibiting C-fibres that transmit painful stimuli from peripheral organs – such as the digestive organs – to the spinal cord. Peripheral hyperalgesia (increased sensitivity to pain) improves as a result.

The role of ECS in the digestive system is not fully understood. For example, the role of the CB1 receptor in the inflammatory process remains to be determined [9].

In a placebo-controlled study from 2013, 21 MC patients participated in whom steroids, immunomodulators, and TNF-alpha blockers were not sufficiently effective. Medication for the 11 individuals in the cannabis group consisted of THC-containing cannabis flowers for inhalation. Patients in the placebo group inhaled cannabis flowers from which the THC had been removed. During the 8-week treatment period, patients were closely monitored for effects on disease activity and laboratory results. At the end of the study, complete remission was seen in 5 of 11 THC patients. In 10 of the 11 patients, symptoms were reduced. Compared to the placebo group, the cannabinoid group was more satisfied with therapy and reported greater pain relief and improved appetite [9] [10].

A study published in 2021 provides evidence for the efficacy of CBD-rich cannabis oil in the treatment of Crohn’s disease. The randomized, placebo-controlled study involved 56 patients* of whom 30 took cannabis and 26 took a placebo. The cannabis oil contained a high dose of CBD and a low dose of THC. After two months of treatment, the group taking the CBD-rich cannabis oil experienced significant improvements in quality of life and clinical symptoms. However, inflammatory values such as calprotectin and endoscopic findings did not improve significantly [12].

In 2018, a randomized, placebo-controlled, double-blind study investigated the effect of an oral, CBD-rich cannabis extract in CU. A total of 46 participants* completed the study. Seven of 17 people (41%) in the cannabinoid group showed clinical improvement in their bowel inflammation, compared with 30 percent in the placebo group. Those taking CBD experienced more mild to moderate side effects, such as dizziness and headache. Those taking CBD also reported improved quality of life. However, the researchers concluded that these effects were not statistically significant due to the small number of subjects [11].

Abdominal pain, loss of appetite and diarrhea are most commonly treated

In 2013, 292 IBD patients with MC, CU, or indeterminate colitis participated in a survey conducted in Massachusetts, USA. More than half of the respondents (51.4%) reported current or past cannabis use. 48 Patients* used cannabis for medicinal purposes and mostly reported good relief of their symptoms. The symptoms most commonly treated with cannabinoids were abdominal pain (89.5%), loss of appetite (72.9%), and diarrhea (41.6%). Slightly more than half of those without cannabis experience would use medical cannabis for their symptoms if it were legally available [15].

In a 2013 randomized controlled trial, researchers investigated the effects of inhaled THC-rich cannabis flower in patients with MC or CU who did not respond to steroids, immunomodulators, or anti-TNF-alpha antibodies. 10 participants* with CU and 22 sufferers with MC completed the study. After eight weeks of therapy, five of the patients in the THC group but only one person in the placebo group achieved remission. Five of the sufferers were able to discontinue steroids as a result of cannabinoid treatment. Improvements in endoscopic findings were also noted in three patients who underwent colonoscopy before and after therapy with THC. No serious side effects occurred.

The research team concluded that THC is a safe and promising treatment option for IBD and may reduce the need for corticosteroids. Larger studies are needed to further explore its efficacy, proper dosing, and mechanism of action [13].

According to surveys, cannabis use is common among patients with IBD. Many people who have no previous cannabis experience would also use medicinal cannabis. Cannabinoids do not seem to be able to induce remission of IBD. However, many patients* with IBD can use cannabis-based medications to alleviate their extremely distressing symptoms and improve their quality of life. Future studies should therefore investigate more deeply the role of ECS in digestion. To provide further evidence in therapy, clinical trials with large groups of people are needed to investigate efficacy in more detail. In addition, which dosage, which drug formulation, and which route of administration of medicinal cannabis is most beneficial in CED should still be clarified.