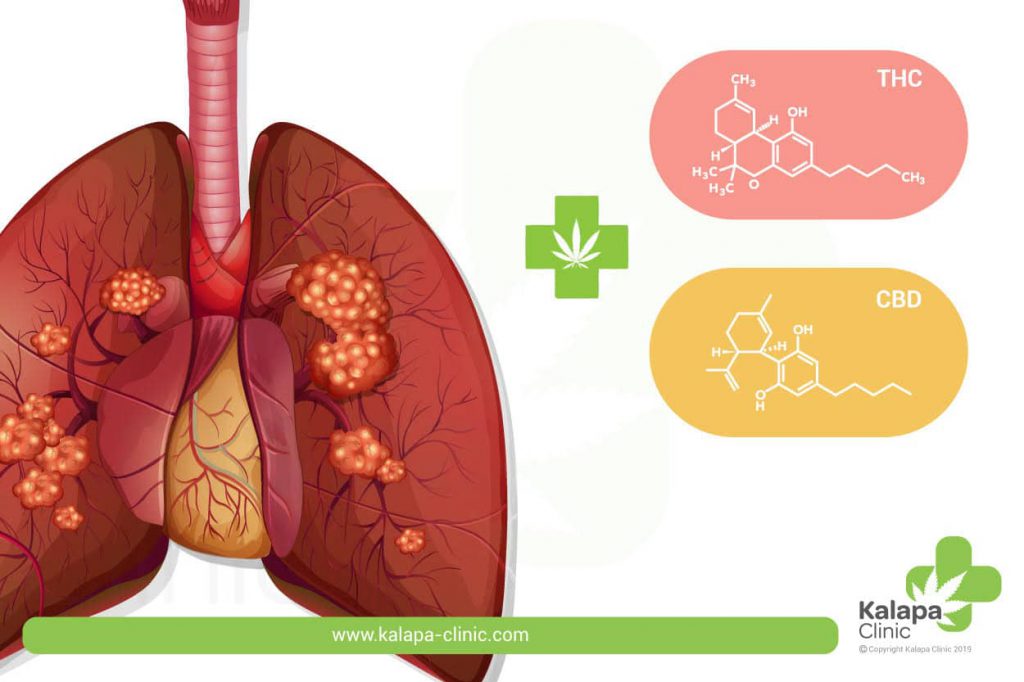 Bronchial carcinoma is the most common cause of cancer death in men after prostate cancer and colon cancer and the second most common cause of cancer death in women after breast cancer and colon cancer. Medical cannabis can be used in chemo/radiation therapy to help alleviate the side effects. In addition, interesting in vitro studies show that cannabinoids may be able to inhibit the growth of lung cancer cells.

There are two types of lung tumours. Approximately one in five patients suffers from small-cell bronchial carcinoma. This aggressive tumour grows very quickly and usually forms early metastases in other organs.

A less aggressive type of lung cancer is non-small-cell lung cancer, which affects approximately 80 percent of patients. Since this tumour consists of larger cells, it usually grows only slowly in a limited area of the lung. The formation of metastases is also slower, so that the tumour can often still be removed in the early stages.

Causes and symptoms of lung cancer

Tobacco smoking is one of the main causes of pulmonary cancer. Only 15 percent of all lung cancer patients are non-smokers. However, other carcinogenic substances, such as asbestos dust or radioactive substances, can also damage the cells of the lung tissue, causing tumours to form.

In addition, lung scars, which can result from inflammation or injury, can also increase the risk of lung cancer. The same applies to an inherited predisposition.

At the beginning of the disease, lung cancer usually causes no symptoms. The first signs could be shortness of breath, chest pain, fatigue and chronic coughing. In the advanced stage, affected persons lose a lot of weight within a short time and frequent sputum with or without blood occurs. Other symptoms such as breathing difficulties, night sweats and fever can also occur.

There are two stages of small cell bronchial carcinoma:

Based on this stage classification, doctors can then plan treatment and follow-up care. It also enables doctors to better assess the course of the disease and the chances of recovery.

The therapy depends mainly on the type of tumour and the stage of the disease. A non-small-cell tumour can be surgically removed, provided that no metastases have yet formed. The chances of recovery are correspondingly good. If the tumour has grown into the neighbouring tissue or if the lymph nodes in the vicinity of the tumour are affected, radiotherapy is usually used. Chemotherapy is usually only given if metastases have formed in other organs.

The treatment of a small-cell lung tumour is far more difficult, because in about 75 percent of all cases metastases have already formed in other organs. Surgical removal of the tumour is only possible if it is still very small. This is rarely the case with small cell tumours. The treatment options available are chemotherapy with cytostatic drugs and then radiotherapy.

In 2019, researchers from Rangsit University in Thailand published the interesting results of their study (1). In a mouse model they were able to show that the cannabinoids tetrahydrocannabinol (THC), cannabidiol (CBD) and cannabinol (CBN) were able to inhibit the growth of bronchial carcinoma. The researchers attribute the anti-cancer properties mainly to the combination of THC and CBN.

Based on the positive results, the researchers are now planning clinical trials. They also announced that the Medical Research Institute at the university is already working on a manufacturing method to extract pure cannabinoid compounds such as THC and CBN from the cannabis plant. This extract will then be used to develop a new drug.

The fact that the combination of individual cannabinoids seems to play an important role in the inhibition of cancer growth is also confirmed by Israeli researchers in their in vitro study (2). They investigated the effects of twelve cannabinoid combinations on twelve different cancer cell lines. It turned out that especially the combinations with a high THC content showed a strong cytotoxic effect on the cancer cell lines.

Again, Italian researchers came to a different conclusion. In their in vitro study they examined the antitumoral activities of the cannabinoids cannabidiol (CBD), cannabigerol (CBG), cannabichromes (CBC), cannabidiol acid (CBDA) and THC acid (THCA) on tumor cell lines (3). Here it was shown that CBD was the strongest inhibitor of cancer cell growth.

Medical cannabis in the treatment of lung cancer

Chemo- and/or radiotherapy is a heavy burden for cancer patients, both physically and psychologically. Medical cannabis can be used here to alleviate the side effects and improve the quality of life of patients. To date, there are no conclusive studies that would allow a reliable statement to be made as to whether the inhalation of medical cannabis additionally damages the lungs in lung cancer.

Because of the uncertain study situation, lung cancer patients are advised not to inhale/vaporize medical cannabis. Instead, prescription drugs (oily solutions) or ready-to-use drugs can be used.

(2)  Israel Institute of Technology, Haifa, Israel, 2019, „The heterogeneity and complexity of Cannabis extracts as antitumor agents“

(4) IARC, Lyon, France, 2006, „Marijuana use and the risk of lung and upper aerodigestive tract cancers: results of a population-based case-control study“