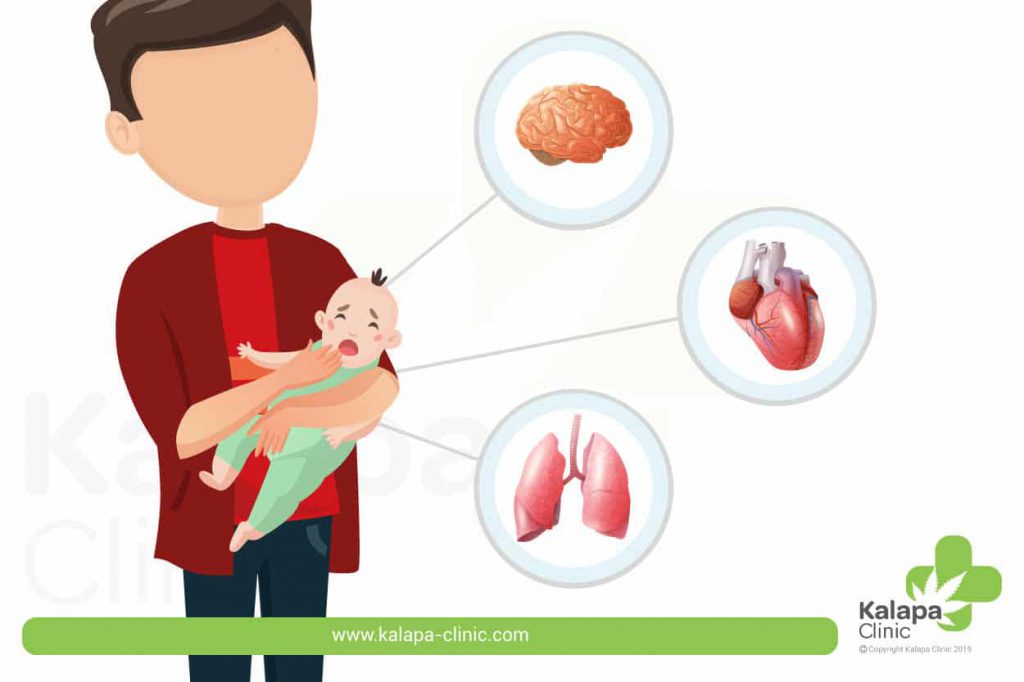 Every year, over a million newborn babies worldwide die or are left with severe disabilities as a result of severe brain damage caused by a lack of oxygen. Recently, hospitals in Spain and the UK are participating in the first ever clinical trial using CBD as a way to increase survival rates in this most vulnerable of patient groups.

Hypoxic ischemic encephalopathy (HIE), brain damage caused by asphyxia, affects 2 or 3 newborns in every 1000 and, as such, is considered a rare disease. However, the condition’s infrequency does not take away from the deep distress felt by any parent when their baby’s life is at risk after complications during birth.

Other factors leading to HIE can include preeclampsia, insufficient blood circulation to the placenta, maternal diabetes, drug and alcohol addiction, and congenital infections of the foetus.

Current treatment for severe HIE favours hypothermia within six hours of birth, whereby the baby’s body temperature is reduced to 33-34°C. Hypothermia has a 70% success rate[1], which still means 30% suffering from HIE will die or be left with severe disabilities. An intolerable situation for both parents of children with HIE and neonatal health professionals alike.

No one more so than José Antonio Martínez-Orgado, Associate Professor of Pediatrics and head of the Neonatology Division at San Carlos Hospital, Madrid, Spain. “What is very frustrating is that throughout my career,” says Dr Martinez-Orgado, “almost all the points of newborn babies care have been substantially improved….But the treatment of brain damage has not”.

And so, Dr Martinez-Orgado has made it his personal mission to find an add-on treatment that will boost the effectiveness of hypothermia. He knew that any future HIE drug would need to target the three major causes of brain damage: inflammation, oxidative stress, and excitotoxicity caused by elevated production of the neurotransmitter, glutamate.

Time and time again, his team came across the neuroprotective effects of cannabinoids, compounds found exclusively in the cannabis plant, and so they decided to further investigate their use in animal models of HIE. They opted to focus their research on the non-intoxicating cannabinoid, CBD (Cannabidiol), which is considered safer in immature brains as it does not activate CB1 receptors in the brain.

Like hypothermia, CBD targets the three key causes of brain damage: overproduction of glutamate, neuroinflammation, and oxidative stress, all of which eventually contribute to necrosis or brain cell death. In a series of preclinical studies in animal models, Martinez-Orgado and his team have repeatedly seen animal subjects suffer comparatively less brain damage after a  hypoxic-ischemic insult (attack) has been induced[2].

CBD and Hypothermia Better Together

Just this March, Martinez-Orgado and his team published their paper, “Neuroprotection by cannabidiol and hypothermia in a piglet model of newborn hypoxic-ischemic brain damage”[3]. Dr Martinez-Orgado states “When we used them together, they were reducing almost 100% of brain damage. So, there was a dramatic synergistic effect because hypothermia alone or CBD alone were not working, whereas CBD and hypothermia were leading to a remarkable neuroprotective effect”.

It must be pointed out that researchers intravenously administered purified CBD to piglets whose brain insult had been induced after birth.

However, this study was enough to achieve the backing of a UK pharmaceutical company, and under orphan drug status, bring about this summer’s clinical trial. Once again, the clinical trial intravenously administered purified CBD alongside hypothermia, comparing it to hypothermia on its own, and hypothermia plus a placebo.

It’s been a long road for Dr Martinez-Orgado to get this trial up and running.

“We are all living in a society looking for a benefit, very easy and very short and very quick,” he says. “So the problem we have been experiencing with the companies is that they’re not looking for prestige, but an easy and quick benefit. So we have to demonstrate that this is something giving benefits to them in a short term. And it’s not easy because are talking about conditions that are affecting 1, 2 out of 1000 newborn babies”.

The clinical trial took place in Spanish and British hospitals, and while Martinez-Orgado was hopeful, he knew that real life emergency situations are harder to control than those in the lab. The doctors have an extremely narrow window of opportunity when babies are born without sufficient oxygen, as hypothermia must be administered no more than 6 hours after birth.

In preclinical studies, the researchers know exactly when the brain insult has occurred. “The problem with the human baby,” says Martinez-Orgado, “is that it’s inside the mother’s womb, and when the mother comes to the hospital, we don’t know when the hypoxic-ischemic insult started”.

The good news is that with the addition of CBD, this narrow timeline may be extended. Orgado says: “What is giving us an extra amount of hope is that in one of our studies carried out on mice, we demonstrated that CBD was still neuroprotective, even if you were waiting for 18-24 hours”[4].

It will be a long wait before the clinical trial results are released, as doctors won’t know whether the babies are free from serious neurological impairment until they are 18 months old. Unfortunately, there is no guarantee that promising preclinical results will be replicated in human subjects, and until then, it is never advisable to administer CBD or any cannabinoids to new-born babies with HIE.