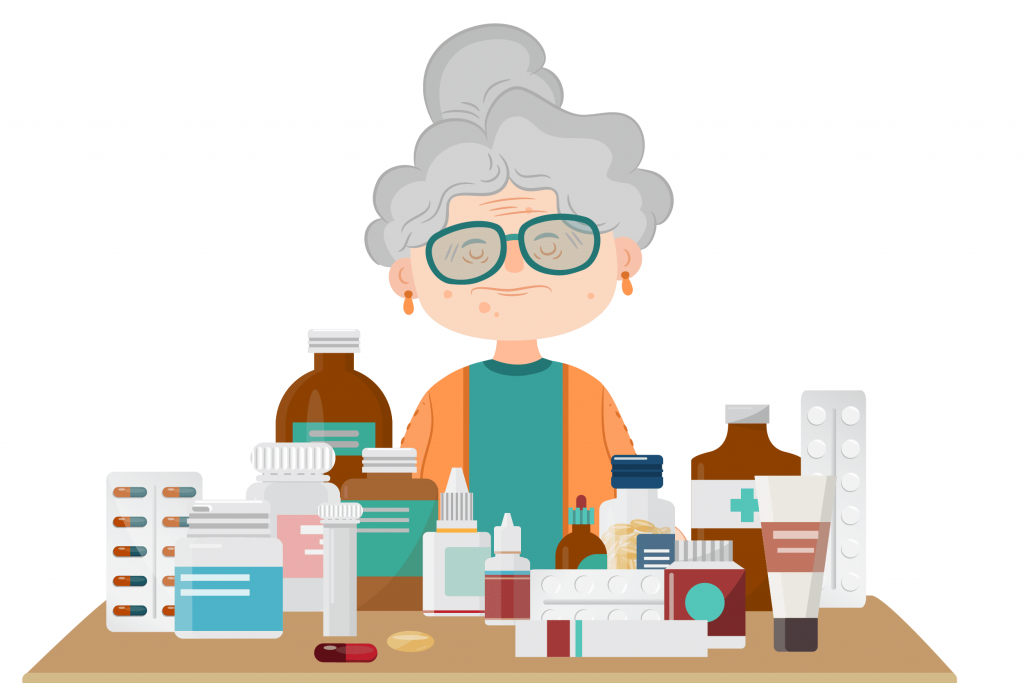 The aging process is something all humans experience. As getting older there are many normal functions that naturally begin to slow down or stop entirely in the body. Many people begin to lose their sensory abilities (sight, hearing, taste, etc.), bones and muscles could become fragile, and even decrease in mass. On the top of that, elderly people are at risk of developing depression, anxiety and insomnia. It is common for doctors to prescribe antidepressants, anxiolytics and hypnotics drugs for these problems, but sometimes the prescription is too ‘heavy’ for the patient, resulting in more issues.

Also when people is getting older, new problems arises all the time and a new drug is given for each, this is referred to as polypharmacy, which could bring extra problems because mixing many medications causes Adverse Drug Reactions (ADR’s), affecting mainly the liver and kidneys. Finally, these reactions could lead to even more medication being given.

The World Health Organisation (WHO) estimates that more than 20% of people aged 60 years and over have a neurological or mental disorder. In this age group, the most common disorders are depression (7%), dementia (5%), and anxiety (3.8%). The problem is that the world´s population is ageing rapidly. In fact, the WHO predicts a global increase of the world´s population over 60 years, from 12% to 22%, between the years 2015 and 2050[1].

According to a research article, inappropriate medication use among the elderly range from 11.5% to 62.5%, so around 50% of this people take at least 1 or 2 drugs that are not needed[2]. Besides, it is crucial to be aware that older individuals are at greater risk of developing adverse events while taking any medication, due to concurrent illness, consumption of other prescribed, forgetfulness and miscalculation doses[3].

Therefore, as the percentage of elderly people in the world increases, it is important to find natural and safe alternatives, and cannabinoids could be the one. This article will discuss how medical cannabis could reduce some of the drugs taken in the elderly populations.

Current treatments for anxiety behaviours are associated with limited response rates, residual symptoms, adverse effects and poor adherence. These limitations place a priority on novel pharmaceutical drugs, such as cannabidiol (CBD). A phytocannabinoid constituent of Cannabis sativa plant, with a broad therapeutic properties. Its anxiolytic potential without any psychoactive effects, conclusively demonstrated on several preclinical and clinical studies, has attracted increasing interest[4]. With these data, and along with the fact that CBD is very low risk for addiction and carries no severe negative side effects, evidence points to CBD as being a perfect alternative treatment for anxiety in elderly people. To understand how cannabinoids affects an organism, the endocannabinoid systems is the clue.

On the other hand, it is well recognized that mood elevation is one of the benefits of the complex experience elicited by cannabis. In preclinical studies, it was originally reported that the stimulation of CB1 receptor by delta-9-tetrahidrocannabinol (Δ9 THC), the principal psychoactive constituent of cannabis, resulted in antidepressant-like activity. These changes include enhanced efflux of noradrenaline, 5-hydroxytryptamine, and dopamine in various brain regions, which are molecules associated with mood changes. Δ9 THC, is a CB1 partial agonist, which can be used to activate receptors to a submaximal response (when inadequate amounts of human´s ligand are present), or reduce the overstimulation of receptors (when excess amount of the human´s ligand are present).

Another research, recognized that CBD exhibited a dose-dependent antidepressant-like effect in animal models. It acts as a partial agonist on the human serotonin 5-HT receptors, which may be involved in its antidepressant and anxiolytic effect. In addition, it has low affinity for both cannabinoid receptors, CB1 and CB2. Moreover, another phytocannabinoid called cannabichromene (CBC), also exercised an antidepressant-like action in animals (at the right dose), but the mechanism underlying such activity is still unclear, leading to further studies[5]. Actually, treating depression, stress and burnout syndrome with synthetic THC (Dronabinol), also showed successful results[6].

Additionally, THC, as well as other cannabinoids that contain a phenol group in its molecular structure, possesses antioxidant activity to protect neurons against stress[7].

Finally, insomnia is one of the most common psychiatric disorders associated with anxiety. In fact, sleep disruptions are included in the diagnostic criteria in two categories of anxiety disorders: general anxiety disorder (GAD) and post-traumatic stress disorder (PTSD). Patients with GAD frequently complain to have restless sleep, unrefreshing sleep, and difficulties falling asleep and staying asleep. While nightmares, disrupted rapid eyesmovement (REM), persistent symptoms of increased arousal and insomnia, are common disorders in patients with PTSD. A scientific journal published that CBD helps to induce sleep in rats with anxiety, via its anxiolytic effect, rather than via sleep regulation per se[8].

In 2017, a more recently review of the literature confirmed that CBD may be helpful against excessive daytime sleepiness and REM sleep behaviour disorder. Instead, THC may decrease the length of time that it takes to accomplish the transition from full wakefulness to sleep but could impair sleep quality long-term. To better understand clinical implications, additional longitudinal and controlled research is needed[9].

After all the information above, evidence suggest that CBD could be used as a non-toxic alternative drug rather than conventional antidepressants, anxiolytics and hypnotics medications, resulting in a reduction the amount of medication being taken by older people.

[2] Guaraldo L. Inappropriate medication use among the elderly: a systematic review of administrative databases. BMC Geriatr 2011; 11: 79