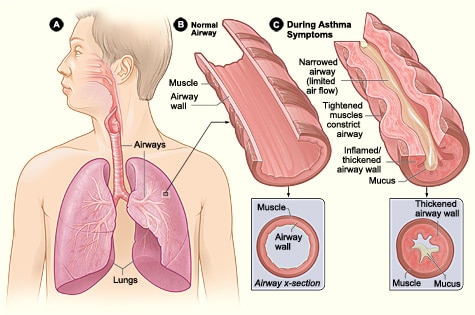 According to the Global Asthma Report 2018, more than 339 million people worldwide suffer from bronchial asthma. About 250,000 people die of this chronic disease, although this could be avoided by adequate therapy.

Studies on the therapeutic potential of cannabis as a medicine for respiratory diseases have been going on since the 1970s. It has been shown that medical cannabinoids can relieve the symptoms associated with asthma.

With this chronic respiratory disease, the airways become narrower as a result of inflammation. At the same time, the production of mucus is stimulated, so asthmatics suffer from symptoms such as shortness of breath and coughing fits. In many cases, recurrent respiratory tract infections exacerbate the disease.

The causes have not yet been clarified. However, there are several factors that can increase the risk of developing asthma. These include hereditary factors, respiratory infections or the use of certain drugs during pregnancy (such as antibiotics). Smoking tobacco and regular inhalation of harmful substances (such as sulphur dioxide) are also risk factors.

Which forms of asthma exist?

Asthma is divided into different forms. These include, among others:

What are the symptoms of asthma?

When an asthma patient comes into contact with an allergen or other trigger, the bronchial tubes swell and thick mucus is formed. This causes the airways to constrict and the breathing muscles to contract. As a result, breathing becomes difficult, especially when breathing out. Typical signs of asthma can be:

These symptoms usually occur in attacks. After an attack, asthmatics are usually symptom-free. Complaints then only reappear with the next attack

Various illnesses, such as pertussis, cystic fibrosis, or bronchitis, can trigger symptoms similar to those of an acute asthma attack. Therefore, a comprehensive diagnosis is particularly important. The doctor treating you will first carry out a physical examination and listen to your lungs. Further examinations such as an allergy test, a lung function test, blood tests and an X-ray of the lungs will follow.

There is no cure for asthma, so therapy aims to reduce the frequency and severity of attacks. An important pillar of therapy is to maintain the patient’s performance and lung function. Regular exercise and breathing exercises should therefore be on the patient’s agenda.

In drug treatment, bronchodilator drugs (bronchodilators) are mainly used. Short-acting beta-2 sympathomimetics (e.g. salbutamol or terbutaline) are used for acute asthma attacks. These active substances can be inhaled by the patient with the help of a spray in cases of severe breathing difficulties. In addition to this essential medication, patients are often given long-acting beta-2 sympathomimetics (e.g. formoterol or salmeterol) that work for about 12 hours.

Anti-inflammatory drugs such as corticosteroids also play an important role in long-term therapy. For example, drugs like budesonide or fluticasone can reduce swelling in the airways and mucus production. Antileukotrienes can also be used as additional therapy, as they can also have an anti-inflammatory effect.

Studies on asthma and cannabis

It was mentioned at the beginning of the article that researchers have been studying the bronchodilator effect of cannabis since the 1970s. In 1974, US researchers carried out a study in which one group of participants received the cannabinoid tetrahydrocannabinol (THC) and another group received isoproterenol (1). This showed that although the bronchodilator effect of THC was weaker, it lasted longer.

Another study showed that salbutamol had a rapid bronchodilator effect. In contrast, the effect of THC was slower (2).

Cannabinoids may have anti-inflammatory effects

The bronchial tubes of patients can also become inflamed during a period when they are not suffering from attacks (chronic inflammation). If an acute asthma attack occurs, the inflammation can get worse, so anti-inflammatory drugs can be prescribed. This is where cannabinoids derived from cannabis, especially the cannabinoid cannabidiol (CBD), could deploy an anti-inflammatory effect.

In 2015, Brazilian researchers declared that T-helper-2 lymphocytes could be detected in the lungs of asthma patients (3). These T-helper cells are responsible for the recognition of antigens and are involved in the production of cytokines. Given that the interaction of T-helper cells with antigens/allergens could play a key role in the development of inflammatory diseases, the aim of the study was to assess the anti-inflammatory potential of CBD.

Asthma was then induced in rats by ovalbumin (OVA). The animals then received 5 milligrams of CBD per kilogram of body weight. 24 hours later, the cytokines in serum levels were determined and it was found that CBD could be a potential new drug to modulate the inflammatory response in asthma.

Smoking medical cannabis flowers is not recommended for asthmatics. This can cause bronchitis, for example, which can make the asthmatic symptoms worse. In the context of medical cannabis treatment, vaporization/inhalation with a vaporizer or oral administration is therefore recommended.