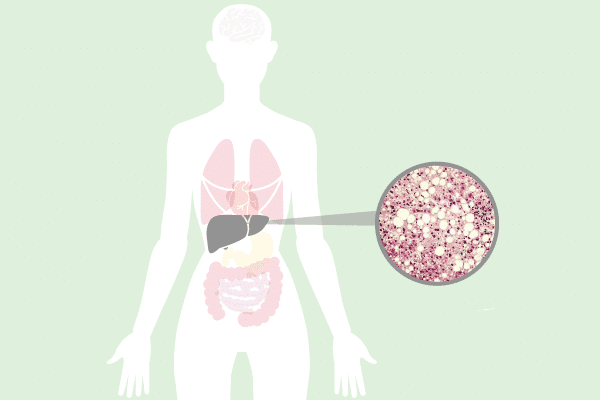 Hepatitis C is found in those affected by a liver inflammation caused by the hepatitis C virus (HCV). The human immunodeficiency virus (HIV), on the other hand, is a virus that attacks the immune system of the affected person and can cause AIDS.

Both HIV and hepatitis C can be transmitted by blood. Those who are particularly at risk of infection from these two viruses are people who inject drugs into their veins with used needles. Because of the similar transmission pathways, HIV and hepatitis C often occur together. It is estimated that approximately 200,000 people in Europe suffer from both infections simultaneously.

Patients who are infected with these viruses have an increased risk of developing a fatty liver. Contrary to what has been said in previous studies, that cannabis has a negative effect on HIV-HCV co-infected patients, there is a new study showing the opposite. According to this study, cannabis could reduce the chances of developing a fatty liver (steatosis hepatis) in HIV-HCV co-infected patients[1].

In the development of a fatty liver, fat drops accumulate in the liver of the patient. This is because the liver has to deal with a higher amount of pollutants than usual and can no longer reduce them. Depending on how severe the degree of fatty degeneration is, it can be differentiated into mild, moderate or severe fatty liver.

A fatty liver can have quite unspecific effects. Symptoms can involve a loss of appetite, fatigue, weakness, and nausea. In addition, patients may suffer from bloating and a feeling of pressure in the upper right abdomen. In extreme cases, if a fatty liver is not detected in time, this condition can lead to cirrhosis. The liver tissue is destroyed and the liver is scarred and shrunken. In the final stage, the liver can no longer perform its tasks, leading to liver failure and death.

Researchers from the INSERM in Marseille (France) found out, in a study with 838 patients, that patients who were infected with HIV and hepatitis C and consumed cannabis daily were less affected by a fatty liver. In the study group, 40.1% of HIV and hepatitis C patients had a fatty liver. Of these, 14% consumed cannabis daily, 11.7% on a regular basis and 74% on a daily basis or only occasionally. In those with daily cannabis use, a reduced frequency of a fatty liver was found. From this, the researchers concluded that “daily cannabis use may be a protective factor against the development of a fatty liver in HIV-HCV co-infected patients”.