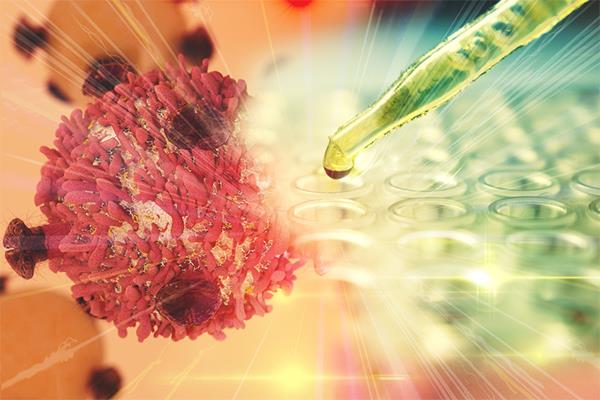 Cancer – a diagnosis that causes anxiety. Medically, it is a variety of different diseases. But regardless of the type of cancer, they all have one thing in common: healthy tissue is destroyed by the uncontrolled proliferation of degenerate, malignant cells. These continue to divide and form tumours. When the cancer spreads in the body, so-called metastases form.

Cannabinoids are used in the treatment of cancer to relieve symptoms such as pain, nausea and loss of appetite. In addition, scientific evidence is accumulating that cannabis can be helpful in fighting cancer.

What types of cancer are the most common?

There were an estimated 3.9 million new cancer cases and 1.9 million cancer deaths in Europe in 2018. (1) The most common cancers in men are prostate cancer, colon cancer and lung cancer. Women mainly develop breast cancer, as well as colon and lung cancer. Skin cancer and cervical cancer also occur frequently. But not every tumour disease is cancer, because there are both malignant and benign tumours. Only malignant tumours are called cancer.

The most common types of cancer:

Malignant tumour diseases are the second most common cause of death after cardiovascular diseases. But there is also good news: Survival prospects after cancer have improved significantly in recent years [1]. In Germany! We need to get the source again because I deleted it. Sorry!!!!

The treatment of a malignant tumour is very individual. It depends on many different factors, both in relation to the form of cancer and to the person affected. For example, the treatment plan depends on the type of tumour, its location and how advanced the disease is. How old is the person affected, what is their general condition, have metastases already formed? These are various aspects that the treating doctors consider. If possible, the goal of cancer therapy is to cure the patient. Doctors speak here of curative therapy.

Cannabis against side effects of chemo

Medical cannabis helps cancer patients in different ways. Cannabis has been shown to reduce tumour pain [2]. It can also alleviate the severe side effects of chemo treatment. Those affected often suffer from nausea, vomiting, loss of appetite and insomnia. Medical cannabis has been used in this context for a relatively long time to improve the quality of life of cancer patients. The positive effect of cannabis on depressive moods is also interesting [3].

In Germany, the finished drug Canemes is approved for the treatment of adult cancer patients with nausea and vomiting due to chemotherapy. The active ingredient nabilone contained in it is a fully synthetic variant of the cannabinoid delta-9-tetrahydrocannabinol (THC).

Studies show that the medicinal use of cannabis does more than only helping to counteract the severe side effects of cancer treatment. Scientific research suggests that cannabis-based medicines also have anti-cancer properties.

A review paper from the University of Rostock in 2018 examined the antitumor behaviour of cannabinoids [4]. For this purpose, the scientists evaluated the results of the studies on the topic available up to that point (?) I am not sure what the idea is here I would say let’s delete it. The authors of the study conclude that cannabinoids are of interest as possible systemic anti-cancer drugs. According to the scientists, cannabidiol (CBD) in particular plays a prominent role here. CBD has “been shown to possess a broad spectrum of anticarcinogenic properties“.

How do cannabinoids work against cancer?

How exactly cannabis can fight cancer is complex and not yet sufficiently researched. However, cannabinoids are seen by scientists as a promising tool in cancer therapy – and “not only as palliative agents, but also as antitumor drugs” [5]. In one study, cannabinoids showed a high anticancer effect in breast cancer and prostate cancer.

A 2019 study confirms that laboratory tests as well as animal studies show that cannabinoids can effectively regulate tumour growth [6]. However, the scientists conclude that the antitumor effect seems to be largely dependent on the type of cancer and the dose or concentration of the cannabis drug.

For the researchers, it is therefore clear: we need a better understanding of how cannabis is able to regulate essential cell processes involved in tumour development and cell death. Likewise, further research into the interactions between cannabinoids and the immune system is essential. After all, these scientific findings “are crucial for improving existing and developing new therapeutic approaches for cancer patients” [6].

The role of CBD in the fight against cancer was investigated in 2018 by a scientific study from London Metropolitan University [7]. The researchers were able to show in vivo that cannabidiol (CBD) inhibits the release of exosomes and microvesicles (EMV) in prostate cancer, hepatocellular carcinoma and adenocarcinoma of the breast. This makes cancer cells more sensitive to chemotherapeutic drugs and can limit cancer growth. However, it was also shown here that the effect depends on the dose.

The study concludes that cannabidiol can be used to make cancer cells more susceptible to chemotherapy and thus optimise it. CBD could possibly help to ensure that even a lower dose of chemotherapy is sufficient for the treatment and brings the desired therapeutic success.

But it is not only CBD that is of great interest to science. In recent years, research has also become aware of cannabidiolic acid (CBDA). Researchers at Hiroshima International University in Japan have found evidence that CBDA may be able to inhibit the production of a certain enzyme [8]. This would make it a relevant agent in the fight against cancer. However, more research is needed here as well before the connections are sufficiently clarified.

Influence of the composition of a cannabis extract

The cannabis plant contains a large number of phytocannabinoids, terpenes and other components that have a synergistic effect – also called the “entourage effect”. The biological effects and the interaction of these cannabis compounds are not yet fully understood. Nevertheless, they influence the therapeutic effect of the cannabis plant.

A 2019 Israeli study aimed to investigate the antitumor effects of different phytocannabinoids on different cancer lines [9]. For this purpose, the scientists selected 12 different cannabis extracts. The extracts influenced the survival and proliferation of tumour cells. What is particularly interesting, is that the results show that pure THC did not have the same effect on the cells as the cannabis full-spectrum extracts. Moreover, cannabis extracts with similar amounts of THC produced significantly different effects on the survival of the malignant cells.

The scientists therefore conclude “that the effect of a Cannabis extract on a specific cancer cell line relies on the extract’s composition as well as on certain characteristics of the targeted cells”.

At the moment, cannabis has a recognised role in the therapy of cancer patients. Cannabinoids are used to combat tumour pain, insomnia and depression. They can also alleviate the side effects of chemo treatment, such as nausea, vomiting and loss of appetite.

Thus, medicinal cannabis already has a rightful place in the therapy of cancer. As an add-on medication it makes an important contribution to improving the quality of life of patients.

Nowadays, science is also showing more and more interest in cannabis for the primary treatment of cancer. Study results show that cannabinoids can hinder the proliferation and spread of cancer cells. However, the mechanisms behind this have not yet been fully clarified.

Another decisive aspect seems to be the composition of the respective cannabis drug. Here, studies have shown that the entourage effect has an impact on the effectiveness of the drug in the fight against cancer.

Further scientific research and, above all, larger clinical trials are necessary in order to optimally use medicinal cannabis against cancer. However, its potential is already apparent – not only in palliative therapy, but also in use against malignant tumour cells.