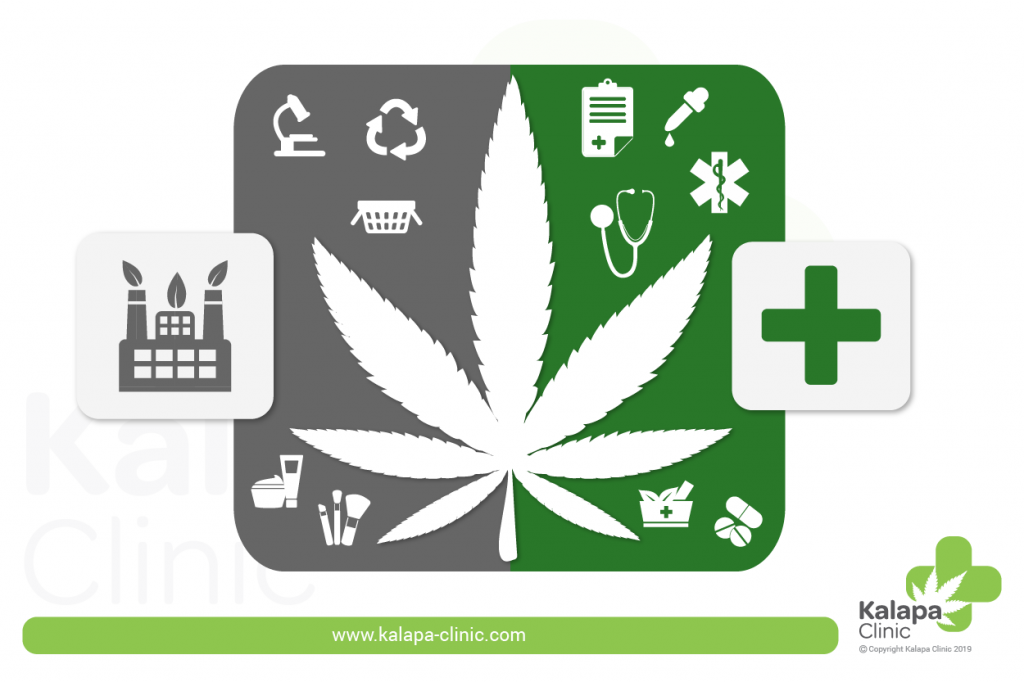 Cannabis, hemp, marijuana, hashish, grass, weed – there are many terms used for cannabis plants. Although many of them are not relevant for medical use, it is important to know and be able to distinguish the differences.

What is the difference between cannabis and hemp?

Hemp is a plant species that belongs to the hemp family (Cannabaceae). The hemp plant is one of the oldest, and useful, plants on earth. Cannabis is the Latin name for hemp.

The term hemp is often used colloquially to refer to the production of consumer goods (e.g. hemp paper or hemp clothing) or foodstuffs (e.g. hemp oil or CBD oil). Doctors and scientists tend to use the term cannabis. Similarly, cannabis is the term used to describe the narcotic (illegal drug) for recreational use.

Hemp (cannabis) has been cross-bred for centuries. In 1753, the Swedish natural scientist Carl von Linné classified “common hemp” (Cannabis Sativa L.) for the first time. About 32 years later, the French botanist Jean-Baptiste Pierre Antoine de Monet and Chevalier de Lamarck, discovered the Indian hemp (Cannabis Indica). This differs from the Sativa strains not only in its growth habits, but also in its content. It contains less THC and produces more CBD.

It has long been said that the Cannabis Sativa plant can have both invigorating and uplifting, cerebral and psychotropic effects. On the other hand, Indica and Ruderalis are said to have relaxing effects rather than a high or intoxicating feeling. Recent studies (1) show, however, that the spectrum of effects of the individual species is not easily differentiated.

According to the cannabis researchers, the different appearances of the Sativa, Indica and Ruderalis are mainly due to the cultivation and breeding method. Here are the differences.

Cannabis strains and their medical use

The spectrum of effects depends on multiple factors, including the respective THC and CBD quantity and the presence of various other cannabinoids, terpenes and flavonoids.

The active ingredients in medical cannabis such as the cannabinoids THC and CBD interact with the body’s own endocannabinoid receptors. Depending on the composition and quantity of the cannabinoids, cannabis can act differently. For example, patients with chronic pain may benefit from strains with high THC and low CBD. However, these strains can also be used for nausea and vomiting as well as loss of appetite.

However, strains with high CBD and low THC percentages can have calming effects and can be used for anxiety disorders and ADHD. Since CBD can have anti-inflammatory effects, these strains are often prescribed to patients with chronic intestinal inflammation.

In general, the spectrum of the effects that cannabis has is very complex. Additionally, each patient reacts differently to cannabinoids. Commonly, patients will begin trying different strains and experiment with dosages until they find a strain with a cannabinoid profile that fits their needs. (2)

What is industrial hemp?

There are 52 different EU-certified hemp varieties for commercial cultivation. These have a high fibre content between 30% to 40% and a THC content of less than 0.2%.  For this reason, the commercial hemp varieties are not suitable for the production of medical cannabis or marijuana. Instead, it is used to produce hemp seed oil or CBD oil, for example.

Marijuana is referred to as the dried flower clusters and flower-like leaves on the female cannabis plant. Compared to other parts of the plant, these have the most resin glands with the psychotropic cannabinoid tetrahydrocannabinol (THC).

Usually female cannabis seeds are used for cultivation. This prevents the plants from pollinating each other. As a result, the cannabis plants then produce unfertilised flowers rich in trichomes with a high THC content.

Recreational users also tend to use the terms grass, weed, ganja or dope for marijuana. In the USA, however, the term “Mary Jane” is often used. Marijuana here is derived from the Mexican-Spanish word “Maria Juana”.

When marijuana is sold in the black market, it can be of inferior quality. Often other parts of the plant (“hedge”), which have no effect at all, are mixed under the dried flowers.

It is particularly dangerous if the flowers have been laced with different substances such as potassium fertilizer, lead, sand, sugar or hairspray. This can pose a considerable health risk. Especially if the so-called “Brix”, a combination of liquid plastic, sugar and hormones, is used for diluting. The dried flowers are dipped into this mixture, so that a plastic film covers them. You can recognize bribed marijuana when the flowers burn with difficulty and leave residues.

Hashish is colloquially known as hash, pot or shit. It is the resin extracted from the resin glands of the female cannabis plant. The golden yellow-brown resin is then pressed into plates or blocks. Some pieces of it are called “pieces” by recreational users.

The quality and active ingredient content can vary considerably. Hashish, like marijuana, can be mixed with cutting agents. In traditional growing countries, hashish is often mixed with henna, damiana, sand, rubber, wax or even animal fat. In the 1970s, the best-known hashish varieties were classified according to colour and growing region.

For example, the “Black Afghan”. The black varieties come from countries such as Pakistan, India and Nepal. Here the resin of the plant is kneaded and compressed until the resin glands burst open and show a black colour.

Furthermore, the “Green Turk” also belongs to the traditional hashish varieties. After harvesting, the flowers are dried and sifted several times. As a result, the hashish can reach different quality levels. The more green, coarse plant material is produced, the lower the quality.