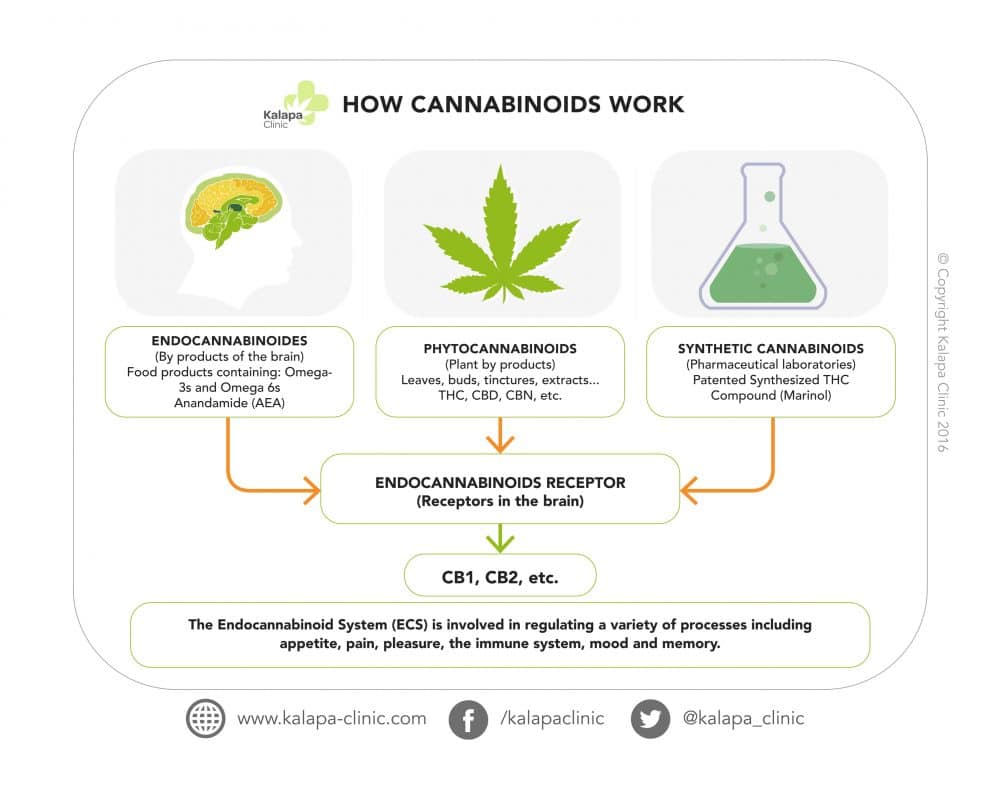 Cannabinoids are chemical compounds that are processed in the cannabinoid receptors. There are several types of cannabinoids; including, phytocannabinoids (found in the plant Cannabis sativa L.), endogenous or endocannabinoids (produced in animals and in the human body) and finally, synthetic cannabinoids, (which do not occur naturally, but rather are designed in laboratories).

Each one of these natural cannabinoids causes specific effects in the human body. However, experts say that the most interesting aspect is its interaction with other active components of Cannabis Sativa L. For example, a study published in the British Journal of Pharmacology indicates that phytocannabinoid-terpenoid interactions could produce synergy with respect to the treatment of pain, inflammation, depression, anxiety, addiction, epilepsy, cancer, fungal and bacterial infections (including methicillin-resistant Staphylococcus aureus). Dr. Mariano Garcia de Palau also notes that phytocannabinoids exert a systemic role in the endocannabinoid system.

According to a study by Franjo Grotenhermen, the endogenous cannabinoids are generated “from its predecessors” and released on demand “(only when necessary)”. Doctor Mariano Garcia Palau highlights that endocannabinoids “are synthesized and exert their effects locally, only where it is necessary.”

In terms of medical uses, synthetic cannabinoids and cannabinoids from plants are useful in the treatment of tics and obsessive-compulsive behavior in patients with Gilles de la Tourette syndrome (Muller-Vahl et al. , 1998). However, the US NIDA (National Institute on Drug Abuse) has a warning that synthetic cannabinoids can affect the brain in a very powerful way and can be dangerous because besides belonging to what is known as “new psychoactive substances” ( NPS, for its acronym in English), they are activated in a stronger way than cannabinoid receptors.