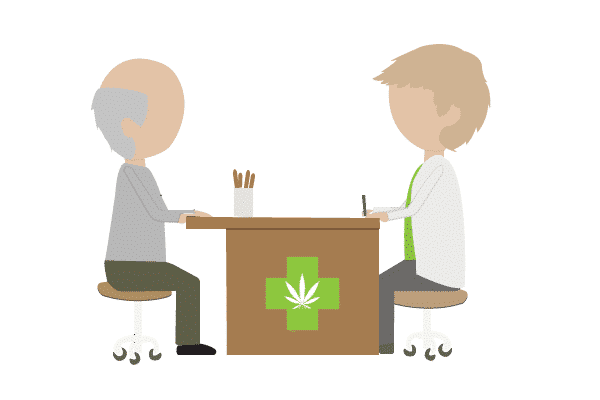 Nowadays, the use of medical cannabis keeps growing and, with the aging of the population, medical cannabis is increasingly used by older subjects. This article has the aim to assess the characteristics of elderly people using medical marijuana and to evaluate the efficacy and safety of this treatment.

Because of the worldwide aging phenomenon, existing in both developed and developing countries, cognitive impairment has a growing public health relevance, representing one of the most common diseases in the elderly and a major cause of disability and mortality[1]. A cognitive impairment is the widely known feature of dementia, behavioural and psychological symptoms. These symptoms include delusions, agitation, depression and anxiety, which are classified as ‘neuropsychiatric symptoms’ (NPS). If these symptoms persist, can lead to a significant reduction in cognitive functioning and quality of life. The first line approach of these cases prefer using psychosocial treatments, such as person centered care, sensory interventions, and coaching of caregivers, although their efficacy remains only sparsely evidenced. Moreover, to date, antipsychotic drugs are also widely used in the symptomatic treatments. Though, the efficacy of these approaches is only modest, and they are also associated with relevant and serious side effects, such as falls, cardiac symptoms, cerebrovascular events and in the worst case even death. Nonetheless, other frequently used psychotropic drugs, such as antidepressant, anti-epileptic drugs and benzodiazepines, all have their own serious side effects in vulnerable dementia patients, and are therefore not an appropriate alternative.

Dementia is one of the major causes of disability and dependency among older persons worldwide. It is a common syndrome, characterized by a progressive decline in various neuropsychological and cortical functions, including memory, orientation, language and judgment. These disturbances affect the individual’s social and functional ability. Different types of dementia exist, of which Alzheimer’s disease is the most prevalent (60-70%), followed by vascular dementia, while –rising with age- different types of etiology can also co-exist.

THC, the main psychoactive constituent of the Cannabis Sativa L. plant, thanks to its psychological as well as physiological effects, has received extensive attention in the scientific field, and cannabinoids are currently used in the symptomatic treatment of patients with multiple sclerosis, among the others. Additionally, several studies have been conducted regarding the efficacy of cannabinoids in a broad range of conditions, including pain, chemotherapy-induced nausea and vomiting and anorexia. On the other hand, in some cases, THC has also showed side effects, such as dizziness, fatigue and balance disturbances, that should be fully addressed and controlled before widespread use, meaning that further studies are still needed.

Studies on safety and efficacy of Tetrahydrocannabinol (THC) treatments

Although cannabinoids are widely studied for their therapeutic potential in a broad variety of conditions, the results from young subjects cannot simply be extrapolated to older patients, especially those with cognitive disorders.

A systematic review[2], conducted by Geke A.H. et al.,(chapter 2) was aimed to integrate the evidence of indications, efficacy, safety and pharmacokinetics of medical cannabinoids in older subjects.

These studies have been conducted focused on three subjects:

The thesis, divided in 5 chapters, explored into different cases and different dosages of cannabinoids for treating the above-mentioned subjects.

In the first study[3], they included solely participants aged 65 years and older treated with a low oral doses of THC, showing no efficacy on dyskinesia, breathlessness or chemotherapy induced nausea and vomiting, while though the oral assumption of THC might be useful in the treatment of anorexia and behavioural disturbances in dementia patients. Moreover, adverse events were more common during cannabinoid treatment, most commonly included sedation-like effects. Two cases reported cardiac arrhythmia and seizure, although a relationship with the study medication could not reliably be assessed. From this chapter has been enounced that there is a lack of evidence concerning the use of cannabinoids specifically in older patients, resulting in scarcity of data to guide treatment decisions.

Afterwards, in chapter 3[4] and 4 of the study, researchers conducted other two studies on patients with dementia and clinically relevant NPS, in which was used a higher dosage of THC, but still kept low (under 3 mg). Even with the increased dose of THC, it didn’t reduce Neuropsychiatric Inventory (NPI) scores, and no effect on agitated behaviour was found, though THC at this new level was well tolerated. Results indicated that long term treatment with low dose THC was well tolerated and did not affect cognition, mobility or weight. Additionally, no effects on behavioural disturbances or caregiver burden were observed.

Chapter 4[5] described the aim to evaluate the efficacy of 4.5 mg THC daily in the treatment of behavioural disturbances and pain in patients with mild to severe dementia. Results indicated THC did not significantly reduce NPI scores, nor were observed effects on agitated behaviour, daily functioning or quality of life. Nonetheless, THC was well tolerated by these vulnerable patients.

Another study[6] was conducted, aimed to assess the characteristics of the older population receiving medical cannabis for a wide variety of diseases as well as evaluate the safety and efficacy of short and medium-term use. On the studied group, the treatment with cannabis induced a significant reduction in the intensity of reported pain, from a median of 8 (up to 10) to a median of 4 after six months of treatment. The general assessment of quality of life was improved with the treatment too. In addition to the general improvement in the quality of life, the patients perceived the treatment as effective for their condition. Overall, in 708 out of 1198 patients (59,1%), the treatment was considered successful, while the 31,7% of them reported at least one adverse event due to the treatment after six months. The most common adverse events were dizziness and dry mouth.

In the final discussion, the author affirms that the study has shown that the treatment on elderly patients is effective in improving pain (a median decrease of 4 points) and quality of life, is not associated with serious adverse events and is characterized by a low discontinuation rate.

Studies on safety and efficacy of Cannabidiol (CBD)

A study[7] conducted by the Department of Clinical, Toxicological and Food Sciences Analysis, at the University of São Paulo, Brazil, suggest that CBD is non-toxic in non-transformed cells and does not induce changes on food intake, doesn’t induce catalepsy, does not affect physiological parameters (heart rate, blood pressure and body temperature), does not affect gastrointestinal transit and does not alter psychomotor or psychological functions. Also, chronic use and high doses up to 1,500 mg/day of CBD are reportedly well tolerated in humans.

According to the over mentioned studies and based on recent advances in cannabinoid administration in humans, controlled therapies CBD and THC may be safe in humans and animals. However further studies are needed to clarify eventually reported side effects that these treatments could lead.