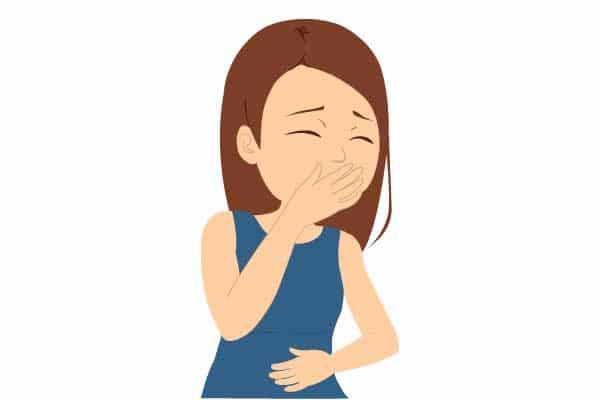 Chemotherapy is one of the central pillars of cancer therapy, along with radiotherapy and surgery. The drugs used, so-called cytostatics or chemotherapeutics, fight malignant tumours, attack cancer cells and prevent them from multiplying. However, chemotherapeutic agents do not only damage tumour cells but also healthy cells, which can lead to numerous side effects, such as nausea and vomiting. Cannabinoids play an important role in combating these extremely debilitating complaints.

Nausea and vomiting – side effects of chemotherapy

One of the most common side effects of chemotherapy, and the one most feared by cancer patients, is nausea and vomiting (CINV). The symptoms can be so severe that some patients stop the therapy, thus jeopardising the success of the treatment. For this reason, anti-nausea drugs – so-called antiemetics – are an integral part of chemotherapy. CINV is the abbreviation for chemotherapy-induced nausea and vomiting.

According to estimates by the Robert Koch Institute, approximately 500,000 people are newly diagnosed with cancer in Germany every year. The trend is rising due to the increasing ageing of the population. In women, breast cancer is the most common diagnosis, in men prostate cancer [1].

Acute vomiting can now be treated well thanks to highly effective serotonin antagonists and other antiemetics. Nausea and delayed vomiting are more difficult to treat. Cannabinoids can be a useful additional therapy option here.

Frequency and risk of nausea and vomiting during chemotherapy

The severity and duration of nausea and vomiting depend on the cancer drug, the dosage, concomitant medications and individual risk factors of the patient. Basically, the treatment of nausea depends on the emetogenic effect of the cytostatic drug, i.e. the ability of the chemotherapeutic drug to cause nausea.

Risk of CINV if no antiemetic is taken

Antiemetic therapy can help in this case. However, despite optimal treatment, 20-30% of cancer patients experience vomiting and 40-50% experience nausea [2].

Depending on the time of chemotherapy when the symptoms appear, three forms are distinguished:

Symptoms of CINV include nausea, retching and vomiting. According to international guidelines of the Common Terminology Criteria for Adverse Events (CTCAE), a distinction is made between five degrees of severity [3]:

Why does chemotherapy-induced vomiting occur?

The two hormones serotonin and substance P are involved in the development of CINV. Serotonin plays the main role in acute vomiting. Here, so-called enterochromaffin cells (EC cells) in the gastrointestinal tract are stimulated by the cancer drugs. These cells normally recognise aromatic substances from food and then secrete serotonin to promote digestion [4]. Chemotherapy releases a massive amount of serotonin. This binds to serotonin receptors (5-HT3 receptors) in the gut. The body relays the signal to the vomiting centre – with the result that the affected person vomits.

Delayed vomiting is triggered by the messenger substance P. Chemotherapeutic drugs stimulate the release of the hormone in the central and peripheral nervous system. Substance P attaches itself to neurokinin receptors and leads to delayed vomiting that lasts for several days [5].

Anti-emetic drugs are an integral part of cancer therapy. They work best if they are taken prophylactically. If they are only used when vomiting occurs acutely, the drugs are often barely effective.

Effective anti-emetic therapy – from the very first chemotherapy – is important to prevent the development of anticipatory vomiting [3]. Depending on how much the respective chemotherapy can cause nausea, and depending on the symptoms, different drug groups are used. These can also be combined with each other:

If patients continue to suffer from nausea and vomiting despite taking serotonin blockers, neurokinin blockers and corticosteroids, additional drugs are prescribed:

What else can people do to improve their symptoms?

Cannabinoids for nausea and vomiting during chemotherapy

Medical cannabis can alleviate some of the most common symptoms associated with cancer and its treatment. Many patients struggle not only with CINV, but also with loss of appetite, severe pain and other symptoms. Cannabinoids can therefore combat various symptoms and thus improve the quality of life of those affected. However, the current evidence for the different symptoms is very mixed [7].

Mechanism of action of THC and CBD against CINV

Both cannabidiol (CBD) and tetrahydrocannabinol (THC) relieve nausea and vomiting, especially during chemotherapy. These cannabinoids have the ability to inhibit serotonin release by enterochromaffin cells in the small intestine.

Although many studies have explored the effect of tetrahydrocannabinol in relation to nausea and vomiting, questions still remain. Since cannabidiol also has an antiemetic effect, but does not trigger any psychotropic effects, CBD is becoming the focus of research as an antiemetic [8].

Since 2017, nabilone capsules (Canemes ®) have been available in Germany for the treatment of therapy-resistant nausea and vomiting during chemotherapy. It has been approved in the USA since 1985. A controlled study of 38 people in 1986 demonstrated the superiority of nabilone over domperidone in relieving vomiting. Sufferers reported reduced nausea and increased appetite with nabilone. However, cannabinoid therapy was associated with more side effects [9].

In a 2015 review and meta-analysis, researchers analysed 79 randomised controlled trials on the use of medical cannabis for CINV and other conditions (chronic pain, appetite stimulation in HIV/AIDS, spasticity, Tourette’s syndrome, sleep disorders, psychosis, anxiety disorders, glaucoma). In total, the data of 6,462 patients were evaluated. Different cannabinoid drugs were used: cannabidiol, dronabinol, nabilone and Sativex®.

The results showed that when taking cannabinoids, 47 percent of the study participants experienced significant relief from nausea and vomiting. In the placebo group, only 20 percent of people reported improvement. However, taking cannabinoids was associated with an increased risk of temporary side effects, such as dizziness, dry mouth or drowsiness. The scientific team notes that the evidence base for CINV is currently weak. The evidence is better for chronic pain and spasticity [10][11].

83% of patients prefer THC/CBD on top of existing medication

A recent study from the University of Sydney is currently investigating the efficacy of a THC/CBD extract in capsule form in cancer patients with CINV who experience nausea and vomiting despite taking standard anti-emetic medication.

The 2020 study involved 81 cancer patients who had three consecutive cycles of chemotherapy. In the cannabinoid group, participants took THC/CBD capsules for six days in addition to standard therapy. The first use was the day before the first administration of the cancer drug. The placebo group took a placebo. In the next chemotherapy cycle, the groups were switched, which is why this study design is also called a cross-over study. In the third and last therapy cycle, the participants now had the choice between cannabinoid and placebo.

Eighty-three percent of those affected preferred the treatment with THC and CBD, although about one third complained of mild side effects. A quarter (25%) reported a significant reduction in their symptoms compared to 14 percent who took a placebo. To further investigate the effectiveness, the research team is planning another randomised controlled trial. This time, the 170 patients will receive either THC/CBD capsules or placebo over three cycles of chemotherapy [12].

The current studies show that cannabinoids can be an effective add-on therapy to established antiemetics. THC seems to be a strong anti-emetic and thus interesting especially in severe cases of CINV. CBD also seems to be effective against nausea. However, there is still a lot of research to be done, as the study situation is thin so far. Future research with larger numbers of people aims to compare cannabinoids with a placebo as an add-on therapy.