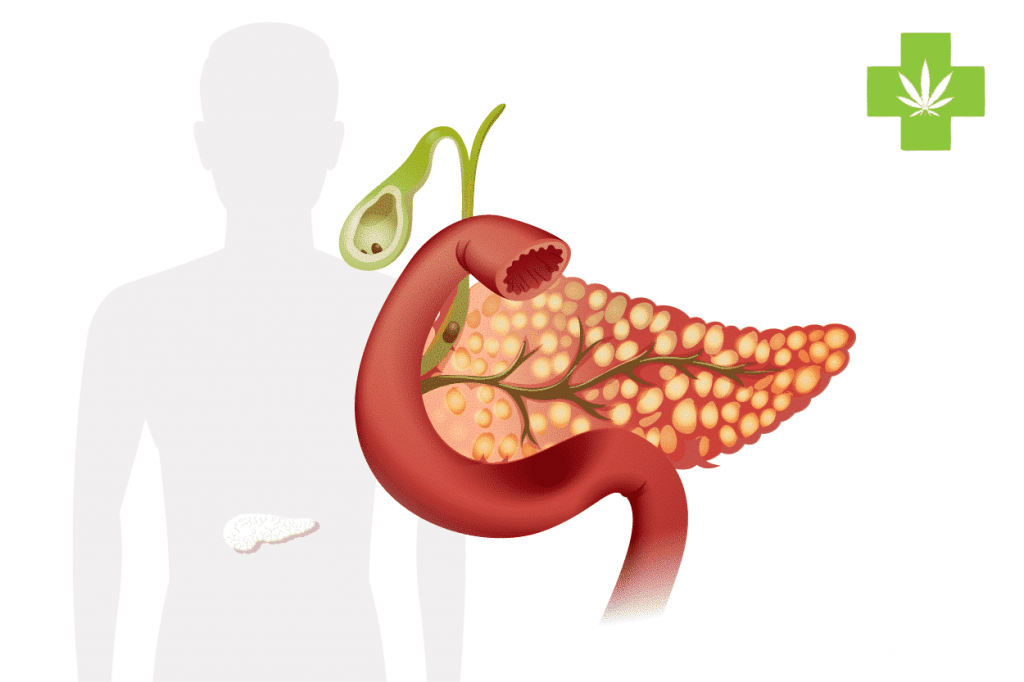 The pancreas is an organ located behind the stomach and in front of the first and second lumbar vertebrae. It is made of lobules, small ducts come from each lobe and empty into a bigger duct, this pancreatic duct and the common bile duct join together and enter the duodenum (intestine). The pancreas produces both internal and external enzymes (proteins), which are necessary for digestion. Acute pancreatitis is a disease that consists of the sudden inflammation of the pancreas.

The main causes of pancreatitis are the presence of gallstones trapped in the pancreatic ducts, or inflammation of the gallbladder. Either of these two reasons cause an obstruction of the common duct, which stop the digestive enzymes from going through the intestines.

The disease can be very dangerous. The most common symptoms include upper abdominal pain radiating to the back, difficulty to breath without any pulmonary cause, persistent nauseas and vomiting, which are rarely improvement by medication. High levels of sugar in blood or urine can also be found, as well as an increase in cells of the immune system.  Treatment includes nothing that can be ingested. Rehydration, pain killers and nutritional support by intravenous. Surgical attention might be indicated in some cases[1].

Inflammatory response in the pancreas is an important factor in the development of the disease. The anti-inflammatory potential of cannabis has been an interested topic since the endocannabinoid system was discovered in mammalian. However, there is also clinical evidence of cannabis inducing acute pancreatitis.

In 2013, a preclinical study showed the anti-inflammatory role of cannabidiol in mice with acute pancreatitis. Cannabidiol (CBD) is a non-psychotropic bioactive component of cannabis with therapeutic properties.

Results demonstrated CBD treatment diminished TNF-alfa and IL-6. Both are pro-inflammatory proteins secreted mostly by T cells, macrophages, neutrophils and endothelial cells; all of these cells express endocannabinoid receptors on their structures. The presence of these receptors allows cannabinoids such as CBD to act on them and thus ameliorating pain and controlling acute pancreatitis[2].

In 2017, a clinical study was conducted to analyse severity and outcomes of acute alcoholic pancreatitis in cannabis users. Patients were studied during the period from 2006 to 2015. Urine drug screen test for THC were performed to patients.

Tetrahydrocannabinol (THC) is the psychotropic component of cannabis. In terms of results, the researchers observed that among THC-positive patients, their acute pancreatitis was much less severe, much less painful than that of patients who had not used cannabis. THC-positive patients were therefore less likely to be admitted to intensive care units. The study found Cannabidiol rises the levels of IL-10, an anti-inflammatory protein, while THC, did not make any changes. Whatever the type of cannabinoid, the timing and route of consumption, as well as alcohol intake were not measure in the study. Therefore, more studies are needed to characterize the effects of medical cannabinoids in acute pancreatitis patients[3].

In 2017, a systemic review of the literature about Cannabis-Induced Acute Pancreatitis (AP) was made by a research group. The results showed that cannabis is a possible risk factor for development of acute pancreatitis especially in patients under the age of 35. Recurrent AP was also reported (57.7%) in patients, related to cannabis use, and (50%) of patients regarding further AP episodes after cannabis stopping. However, lack of parameters of cannabis use in this study impaired the ability to exanimate dose-dependent in the population. The mechanism remains unknown, but in animal models the activation of CB1 receptors by anandamide, a natural endogenous activator ligand, produced worsening of AP severity at high doses[4].

Today, data about cannabinoids and acute pancreatitis is conflicting, researchers are calling for new studies to better understand the molecular mechanism implicated in this painful and dangerous condition.