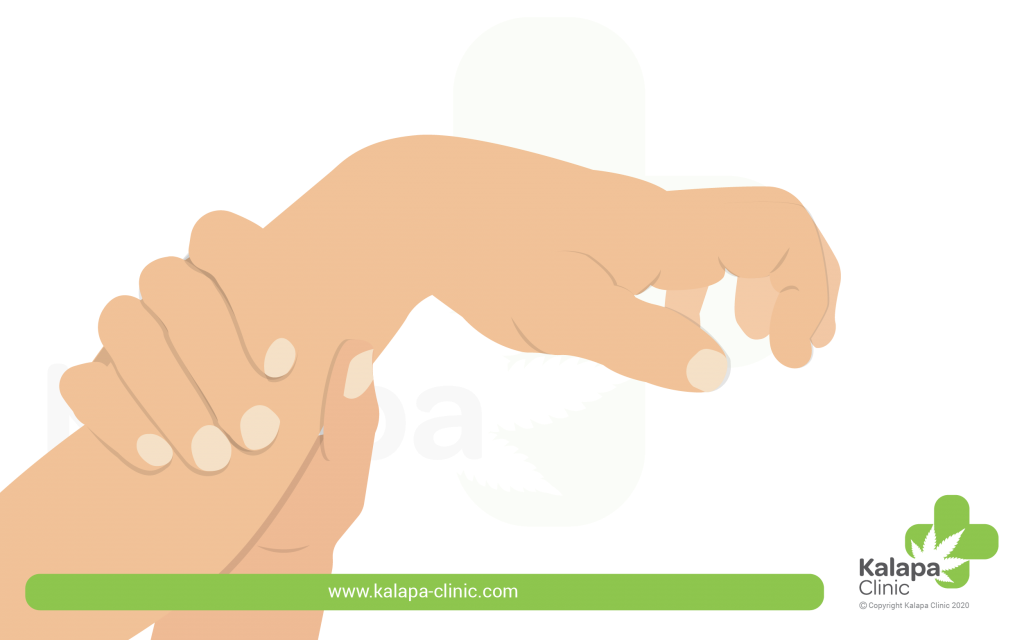 Patients with neurological diseases such as multiple sclerosis (MS) or cerebral palsy often suffer from spastic movement disorders. Spasticity is characterised by increased muscle tension (muscle tone) and involuntary muscle spasms. The cause is damage to motor nerve pathways of the central nervous system (brain, spinal cord) which are responsible for the voluntary movement of the skeletal muscles [1].

If spasticity is not treated or is treated too late complications such as pain, shortening of the muscles (contracture) and skin injuries up to pressure ulcers can occur. These complaints can affect almost all everyday activities. Therefore it is important to treat spasticity as early and effectively as possible [2].

Especially on MS patients, studies have shown that cannabinoids can improve motor skills in spasticity.

Estimated 250,000 patients in Germany suffer from a spastic movement disorder. The most common cause is the stroke. Depending on the underlying disease, spasticity can develop at different points in the course of the disease. Between 20 and 40 percent of stroke patients develop a spastic movement disorder within a year. About half of those with multiple sclerosis develop spasticity [2].

Many neurological diseases manifest themselves in spasticity because the areas in the spinal cord and brain responsible for regulated movement are often injured.

Diseases with spastic complaints are for example [1]:

Experts understand spasticity as an increased, speed-dependent stretching resistance of the skeletal muscles. This means that the faster the muscles are moved passively, the greater the tension. Most of those affected also suffer from other symptoms such as muscle paralysis, slowed movement, increased self-reflexes of the muscles and disturbed muscle tone (spastic dystonia). Doctors therefore also speak of a spastic movement disorder (SMD).

Depending on the regions of the body affected, experts distinguish between focal, multifocal, segmental and generalised spasticity and hemispasticity:

Certain trigger factors can cause or worsen spasms. These include for example limited mobility, pain, emotional tension, inflammation, infection, urge to defecate, urge to urinate, pressure ulcers, thrombosis and bone fractures [2]. If patients know their personal triggers, these triggers can be specifically treated or avoided [1].

How does spasticity develop?

The stretch reflex plays an important role in regulated movements. In the skeletal muscles there are so-called muscle spindles that measure the stretch state of the muscles. They detect whether the muscle is stretched or contracted. The signal is transmitted to the spinal cord via nerve fibres. If a muscle is passively stretched, this triggers the stretch reflex in the spinal cord. Via motor neurons, the skeletal muscles receive the command to contract. However the twitching causes the muscle spindle to stretch again, which would start the cycle again just as happens with spasticity due to the disease. In healthy people, this reflex is therefore controlled by the central nervous system, which strengthens or weakens the signal as needed [4].

The brain dampens muscle contraction via so-called inhibitory interneurons with the aim of creating a perfect balance between stretching and contraction. This happens among other things via the inhibitory messenger substances GABA (gammaaminobutyric acid) and endocannabinoids [8].

In patients with spasticity the areas of the central nervous system responsible for regulated movement are injured. As a result muscle activity is not sufficiently slowed down. This leads to spasticity.

Spasticity is not curable, but can be treated well. The basic pillar of therapy consists of occupational therapy, physiotherapy and positioning in as pain-free a stretch as possible. In addition, physical therapies (e.g. active and passive movement, treadmill training) are used to help patients keep the affected muscles and joints mobile and reduce spasticity [6].

If physical therapies are no longer sufficient, medications are used to reduce the increased muscle tone. The most commonly prescribed medications are baclofen and tizanidine, which are taken orally. Other medicines are benzodiazepines (e.g. clonazepam), dantrolene and tolperisone. These medications are very effective, but can also lead to undesirable side effects such as sedation, impulsive disorder and muscle weakness.

Locally limited spasticity can be treated with orthopaedic aids (splints, orthoses) or botulinum toxin. Botulinum toxin is injected directly into the affected muscle to specifically prevent contraction. In severe spasticity, Baclofen can be applied intrathecally, i.e. directly into the fluid surrounding the spinal cord, via an implanted pump. In very severe cases, surgery can be helpful [1].

Conventional oral antispasticity medications often require relatively high doses [1]. The side effects such as fatigue and muscle weakness can reduce the quality of life of severely ill patients. Medical cannabis, as an additional treatment option, can alleviate both spasticity and associated symptoms such as pain or sleep disturbances due to nocturnal onset of spasticity.

Mechanism of action of medicinal cannabis in spasticity

Tetrahydrocannabinol (THC) mediates its antispastic effects by activating the endocannabinoid receptors CB1 and CB2. The CB1 receptor, which is mainly activated by tetrahydrocannabinol (THC), is predominantly formed in the brain and spinal cord, but is also found outside the central nervous system (CNS). Thus CB1 receptors are also found on motor nerve pathways that connect the CNS with the musculature. How cannabidiol (CBD) has an antispastic effect is currently unclear. It is possible that other receptors play a role including GPR55, 5HT1A receptors and glycine receptors [12].

Scientists suspect that THC inhibits excessive glutamate release by attaching to presynaptic CB1 receptors. CBD can also bind to CB1 receptors to a lesser extent. THC and CBD can therefore improve spastic symptoms by the cannabinoids dampening the overactive muscles [7].

In 2010 a research team studied the efficacy of Sativex® or placebo in 337 patients with refractory spasticity due to multiple sclerosis. Sativex® is an oromucosal medication (oral spray) containing a cannabis extract rich in THC and CBD. Participants rated the severity of spasticity using a numerical rating scale (NRS) from 0 to 10 points. The researchers defined a response to the therapy as a reduction in spasticity of at least 30 percent. They found that using the mouth spray reduced the severity of symptoms by -1.3 points compared to -0.8 points for people in the placebo group. 36% of the people in the Sativex® group responded to the therapy. In the placebo group, only 24 percent responded. The medication was well tolerated. Only mild to moderate side effects occurred.

The results show that Sativex® is an effective add-on therapy for MS patients with severe spasticity [9].

Based on the positive results of this and other large clinical trials with MS patients, Sativex® was approved in Germany in July 2011. A  market report from 2019 showed that Sativex® is now available in 21 European countries, making it the cannabinoid-based medicine with the most approvals [11].

Cross-over study of the efficacy of nabilone in people with spasticity following spinal cord injury. The participants suffered from paraplegia or tetraplegia. 11 patients completed the study of whom five received nabilone and six received a placebo during the first 4 weeks. After that the groups were swapped so that each of the participants was in the cannabinoid and placebo group once. The results showed that nabilone was able to significantly reduce spasticity in the most affected muscles. Compared to placebo, the cannabinoid led to a greater reduction in scores on the Ashworth scale. The Ashworth scale is used by doctors to grade the severity of spasticity from grade 0 (no spasticity) to grade 4 (rigidity).

The scientific team concluded that nabilone can be an effective treatment option for reducing spasticity after spinal cord injury. However as the group of people was very small. Larger studies are needed to investigate the efficacy and safety of nabilone in more detail [10].

In a review from 2019 researchers analysed 32 studies on the therapy of spasticity with cannabinoids. 27 studies investigated the efficacy in adult patients with multiple sclerosis, spinal cord injuries or motor neuron diseases. Most of the studies (21 studies) dealt with MS patients.

The largest study, which investigated the effect of dronabinol and a THC/CBD extract, involved 657 MS patients. This was followed by a 12-month follow-up period in which 80 percent of the patients took part. Subjectively, the patients reported an improvement in spasticity with both cannabinoid drugs. Objectively, the therapy success was supported by reduced Ashworth scale scores in the dronabinol group. The researchers concluded that cannabinoids are also effective in the long-term therapy of spasticity [8].

Spasticity in multiple sclerosis is one of the few proven indications for medicinal cannabis. Cannabinoids have meanwhile found their way into German guidelines for the therapy of spastic syndrome [6]. There are hardly any studies on the efficacy of cannabinoids for spasticity due to other underlying diseases. However there are some promising studies on the therapy of spasticity after spinal cord injury and motor neurone disease. Some case reports also showed therapeutic success in severely ill children and young adults, most of whom suffer from infantile cerebral palsy [8].

Therefore there is still a lot of research to be done that in the future the hurdles in the therapy with medicinal cannabis can be removed for more spasticity patients.