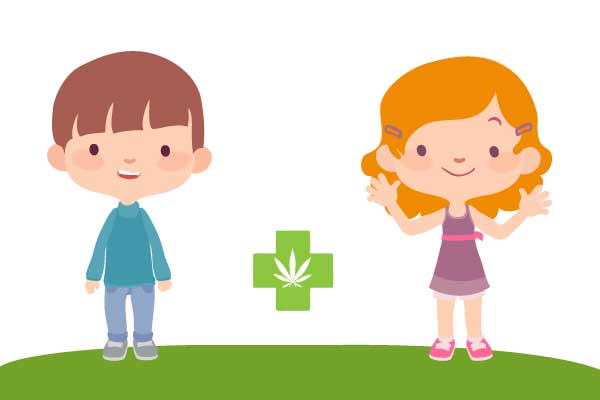 There are many severe diseases that can affect children, such as epilepsy, attention deficit disorder association, autism or cerebral palsy, just to mention a few ones. When a child is born with one of these kinds of illnesses it can often lead to a life time of hospital visits, not to mention the stress of such a situation.

To treat this patients, doctors try different cocktails of medications to see which ones works better, medications that often carry to negative side effects. Based on clinical trials and researches, this article will explain how medical cannabis could help children in a safe way.

Interaction between cannabinoids and children

First it is important to understand how cannabinoids interact with kids. Since day one, humans are exposed to endocannabinoids (natural cannabis molecules inside the body). A 2004 study found that all individuals are born with cannabinoids receptors inside of them, which had led researchers to believe that endocannabinoid system plays a fundamental role in pre and postnatal growth.

It also has been studied that when a baby is breastfed, there are endocannabinoids present in the mother’s milk. Besides, cannabinoid receptor type 1 (CB1) has been directly related to the action of sucking milk, meaning that there is a process related to food and appetite. Interestingly, scientists also have discovered a neuroprotector mechanism in the postnatal development of the brain. However, all these components are not only present in children from birth, but also they are still during the child’s growing, helping with physical and social functions.

Epilepsy, Autism, Cerebral Palsy and Attention-Deficit Hyperactivity Disorder (ADHD) are all neurological disorders which compromised the normal evolution of the nervous system. These dysfunctions affects memory, self-control, learning abilities, sleep issues, chronic pain, spasticity, seizures, social anxiety and emotions. This complications have a vital impact on the organism, for example if there are up to 300 seizures a day, the body will not mature properly as it is busy combating these attacks. Furthermore, when the quality of sleep is disrupted a new set of problems are resulted. Finally, sometimes there is the case of an overlaping with the symptoms, let’s say, a child affected by epilepsy could also show signs of ADHD.

Use of cannabinoids at different ages

It is fundamental to note that due to the differences between paediatric, adolescent and adult brains, some cannabinoids cannot be prescribed to young people. For instance, the use of marijuana during adolescence can damage neuroplasticity (the ability to reconnect neurons whose links were injured), causing memory and motor deterioration.

Additionally, evidences support an associational role in promoting the onset of psychosis. These data comes from the consumption of tetrahydrocannabinol (THC), the main psychoactive substance found within the cannabis plant. Previous studies suggest that adolescence may be a period during which the brain is susceptible to the effects of THC. Nevertheless, the second more prominent cannabinoid called cannabidiol (CBD) has countless therapeutic advantages. It has been increasingly studied in the neurology field and findings demonstrate, neither psychoactive reactions nor impairment on the nervous system activities.

CBD attenuates injuries associated with neurodegenerative and/or ischemic conditions. Moreover, positive neurogenesis (new nerve generation) and diminish psychotic-, anxiety- and depressive-like behaviours has been reported. A 2010 published study, found that CBD generated new neurons throughout adulthood in mice, while THC had no effect. The researchers concluded that CBD could have the same behaviour in humans and even more interesting no harm on learning abilities were described.

The World Health Organisation officially stated on 2017 that CBD does not appear to have a dependence profile or cause harm, which means no health risks and a low-risk abuse potential. About the use in paediatric medicine, CBD is not psychoactive, meaning it does not produce the euphoric and ‘high’ feeling such as those caused by THC.

In countries that have medical marijuana reform, CBD is only prescribed to children if all other therapies has failed. CBD has also shown to reduce seizures, pain, insomnia, stress and anxiety. In summary, with all of these incredible premises it could be an incredibly useful resource for young patients suffering from neurodevelopmental diseases.

It is truth that more research is required, however considering the abundance of cannabinoid receptors in nerve tissues, different cannabinoids are a good option as a treatment for children since conventional remedies leave much to be desired.