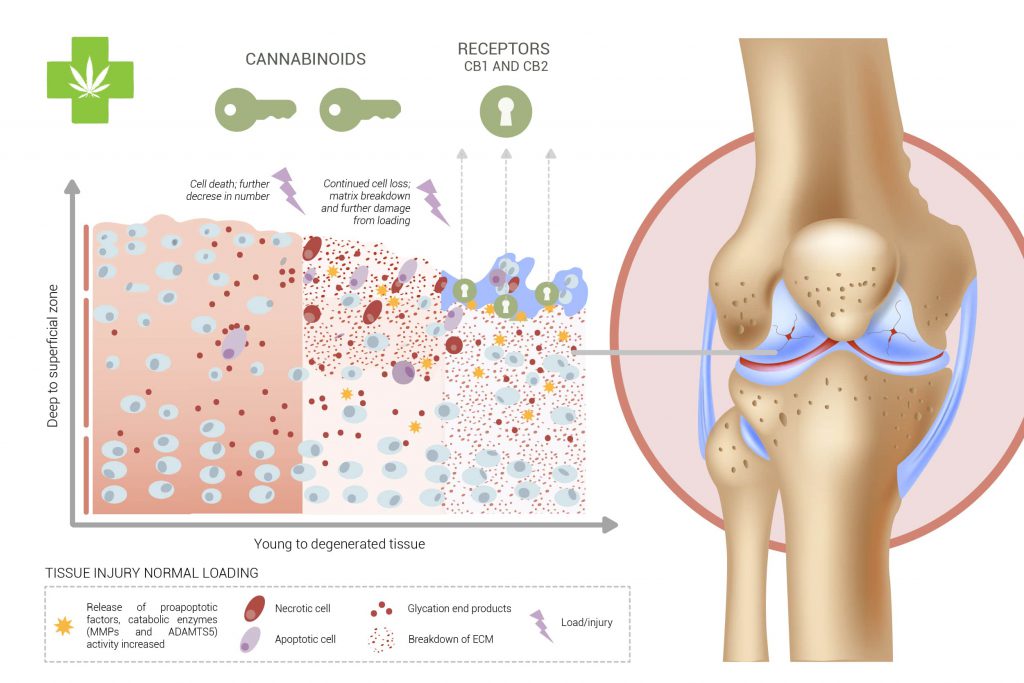 With significant advances in research concerning the role of cannabinoids receptors in bone behaviour, this article aims to establish if there is also a potential for a therapeutic use of cannabinoids in cartilage reconstruction. Due to its slow repairing capability and the prevalence of cartilage diseases, this has become an important field of research in medicine.

An article published in 2000 defines “tissue engineering” as the emerging discipline of design and construction of parts of the human body able to restore function based on molecular bioengineering. In this sense, the replacement of lost parts should perform similar biological functions.

To manufacture biomimetic substitutes, three basic ingredients have been identified: inductive signals, responsive candidate cells, and an appropriate extracellular matrix (ECM). Signals, such as growth factors, are an essential component to any tissue-engineered biomaterial, since most candidate cells involved in tissue engineering processes lose their intrinsic differentiation program. To date, neither conventional treatments nor surgical techniques to repair lost cartilage tissues have given satisfactory results in the long term. Therefore, the future of this new science is very promising, especially for degenerative joint diseases. Besides a much better management would be possible in combination with cannabinoid drugs.

The endocannabinoid system is composed of endocannabinoid ligands (the best known are anandamide and 2-arachidonoyl glycerol), which are molecules that produce a signal by binding to a site on a target, cannabinoid receptors (termed CB1 and CB2), and the enzymes that synthesize and degrade the endocannabinoids. CB1 receptors are mainly expressed in the central and peripheral nervous system, where they mediate the inhibition of neurotransmitter release. In particular, the distribution pattern of receptors CB1 at spinal, supraspinal and peripheral levels support their ability to produce signs of analgesia in both animals and humans.

On the other hand, CB2 receptors are located mainly on immune cells. However, CB2 has been reported to be involved in depression, emesis and drug abuse, playing broader roles than those restricted to peripheral and defence cells. In any case novel evidence implicates the ECS in a wide variety of physiological and pathophysiological processes.

Chondrocytes are those cells present in healthy cartilage, that produce and maintain cartilaginous matrix (mainly collagen and proteoglycans).

Synthetic cannabinoids have been described to act as a cartilage protective agent in animals, through their ability to inhibit nitric oxide production and also by repealing degradation of the proteoglycans (the filler material standing between cells in an organism). Another study demonstrated that cannabinoid receptors type 1 (CB1) and 2 (CB2) are expressed in human osteoarthritis articular chondrocytes. Furthermore, the same research concluded that a synthetic cannabinoid inhibited the inflammatory signal production in bovine articular chondrocytes.

A different publication revealed that CB1 and CB2 are presented in auxiliary cartilage cells such as fibroblast, myofibroblast and synoviocytes. Additionally, the results also showed that activation of the endocannabinoid system dampens cartilage destruction by decrease fibroblast-secreted metalloproinase (enzymes that break apart collagen in the space between the cells). Indeed, the ajulemic acid, a synthetic cannabinoid, analogue of 11-nor-9-carboxy-THC (the major non-psychoactive metabolite of Δ9-THC, produced in the body after cannabis is consumed), induces an anti-inflammatory profile of eicosanoids in human synovial cells, preventing cartilage degradation.

Research concerning the endocannabinoid system over mesenchymal stem cells (MSCs), which are cartilage precursors, has been conducted with positive results. A review examined three factors of MSCs: survival, migration and differentiation, and established that during an inflammation (acute stress), the presence of Δ9-THC enhances the survival of MSCs.

In addition, a significant rise in migration of MSCs to the site of tissue damage was induced by anandamide, which means acceleration in cartilage tissue regeneration and improvement in the success of tissue-engineered strategies. Finally, Δ9-THC also enhances MSC chondrogenesis. MSCs were shown to differentiate into chondrocytes as determined by a proliferation in collagen II expression and the presence of proteoglycan deposits in the extracellular matrix.

As a final point, another non-psychoactive phytocannabinoid, cannabidiol (CBD), proved combined immunosuppressive and anti-inflammatory effects in a mice model for rheumatoid arthritis.

The presented evidence highlights how the endocannabinoid system can affect the major facets of the mesenchymal stem cells and supports the benefits of cannabinoid-based drugs in tissue-engineered applications, aimed at attenuating cartilage degradation and facilitating its repair. For example, CBD´s properties give a good protection against histological injury, especially in arthritic disorders, ameliorating the symptoms caused by this condition.

Nevertheless, more investigation about medical cannabis in humans is needed to better understand all the pharmacological mechanisms by which cartilage breakdown is prevented by cannabis use.