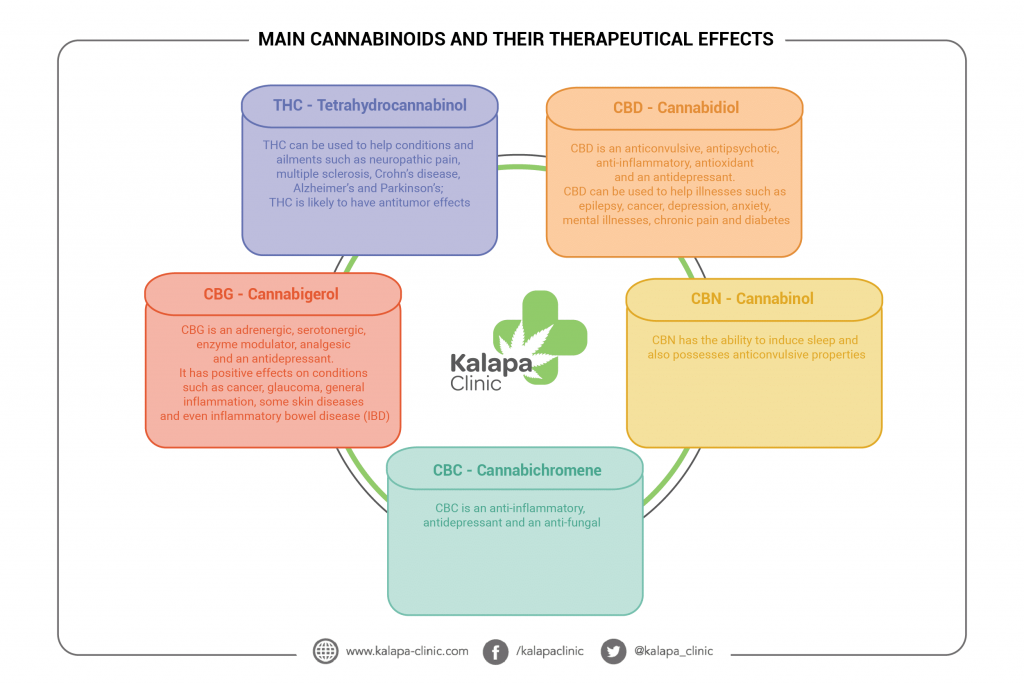 Cannabinoids and their effects are becoming increasingly well known. Although not all of the compounds in the cannabinoid plant have been identified, thanks to recent research we have been able to find out how some of them work and how they are able to benefit well-being.

Cannabinoids interact with the body in different ways, having a variety of different effects. However they can only influence the body due to the body’s endocannabinoid system [1]. This system helps to regulate and re-establish numerous physiological processes such as appetite, pain sensation and, mood and memory. Cannabinoids can be very beneficial for the body.

5 Cannabinoids and their therapeutic effects

THC – Delta(9)- tetrahydrocannabinol: Although Delta(9)-tetrahydrocannabinol (THC) is known for its psychoactive effects as well as its therapeutic effects, it can help neuropathic pain, multiple sclerosis, Crohn’s disease, Alzheimer’s and Parkinson’s, as well as other conditions that can be treated with cannabinoids. Currently studies of the interaction between THC and cancer cells are being analysed and it has been found that cannabinoids have anti-tumour effects [2].

CBD: Cannabidiol has been a subject of great interest since it has a large therapeutic potential without inducing any psychoactive effects. CBD has medicinal properties, such as anticonvulsant, antipsychotic, anti-inflammatory, antioxidant and antidepressant effects.

The list of benefits is steadily increasing due to the amount of studies currently being carried out. Thanks to their properties, research has shown that CBD can help diseases such as epilepsy, cancer, depression, anxiety, mental illness, chronic pain and diabetes [3] as well as many other illnesses. CBD has been authorised in a wide range of countries to treat childhood epilepsy.

CBC – Cannabicromene: is another one of the many cannabinoids. New research has been launched as it has been discovered that some strains of cannabis may have higher concentrations of CBC than of CBD. CBC does not possess any psychoactive effects and it, above all, an anti-inflammatory; it also possesses anti-depressant and anti-fungal properties.

The first time this cannabinoids and therapeutic effects were discovered was in the 1980’s when a study tested the level of CBC in mice and found that there was a reduction of inflammation and a stabilization of the membranes after administering doses of BCC [4]. Other investigations have also stated that the anti-inflammatory effects of CBC are enhanced by THC. In addition, a study performed in 2013 highlighted that CBC could positively influence stem cells in the nervous and muscular system, and may interact with some receptors and a range of different cells in the cannabinoid receptors [5].

CBG – Cannabigerol: A cannabinoid that is found in low concentrations, since it can only be found at the beginning of the plant cycle, especially in the hemp plant. However, several studies are testing the therapeutic potential of CBG as an adrenergic, serotonergic, enzyme modulating, analgesic and antidepressant.

As a therapeutic agent, CBG can exhibit positive effects for conditions such as cancer, glaucoma, inflammation in general and certain skin diseases [6]. It may also have a positive effect on bowel disease because it can inhibit bowel mobility when it is inflamed [7].

CBN – Cannabinol: Cannabinol is another cannabinoid that appears after the degradation of THC. It is responsible for most of the sedative effects exhibited by the plant. In fact, one of the therapeutic benefits of CBN is its ability to induce sleep. Apart from its usefulness for treating insomnia, it has also been known to be used as an anticonvulsant. Since 1973, its anticonvulsive properties have been recognized along with THC and CBD [8]. It can also be observed that cannabidiol has larger affinities with CB2 receptors than with CB1, thus having a weaker effect on the central nervous system.

These are some of the main cannabinoids along with their therapeutic effects. In the next few years, thanks to the advancement of scientific studies, more health benefits of the cannabis plant will be discovered.

Bibliography for the main cannabinoids and its properties

[2] Katherine A. Scott, Angus G. Dalgleish, Wai M. Liu. Anticancer effects of phytocannabinoids used with chemotherapy in leukaemia cells can be improved by altering the sequence of their administration. (2017)