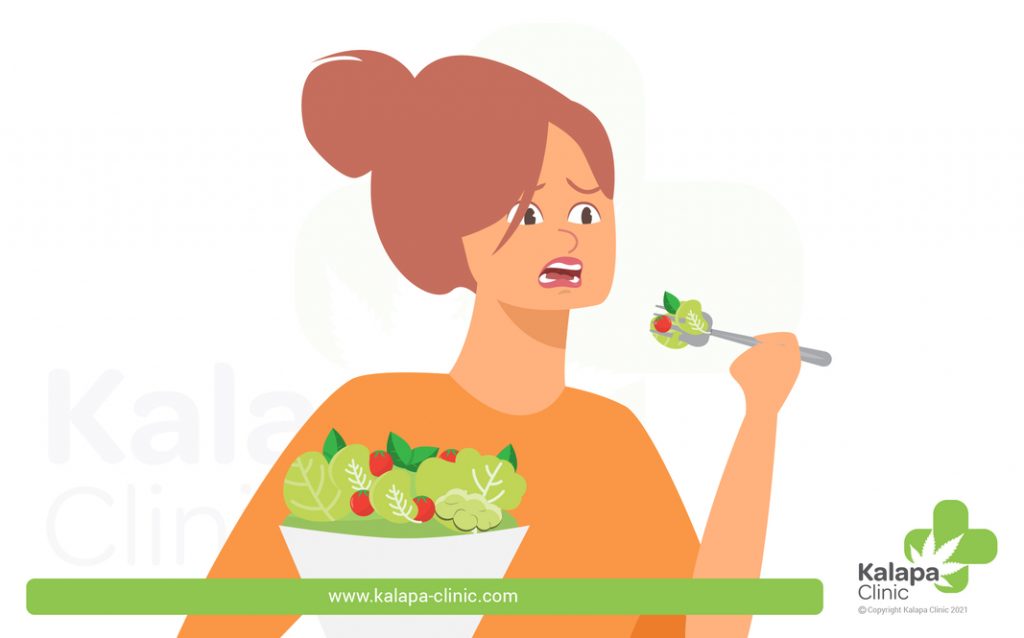 Serious diseases such as cancer, chronic infections or autoimmune diseases deplete the body and cause weight loss. Therefore experts also speak of consumptive diseases. Medical cannabis is known for its appetite-increasing effect. Studies show that cannabinoids can be an important option in the treatment of anorexia and cachexia in cancer and HIV patients.

Cachexia and anorexia – what is it?

Cachexia is a multifactorial syndrome that occurs in various chronic diseases and is associated with severe weight loss. In contrast to a starvation state, in which mainly fat reserves are burned, the body loses in cachexia also vital muscle and organ tissue [3]. The patients become weaker and weaker. Dietary changes alone cannot stop this process. Cachexia not only reduces the quality of life of the severely illness. The weakening of the body can even aggravate the underlying disease and influence recovery negatively.

Severe course of the disease – Consequences of cachexia and anorexia

The anorexia-cachexia syndrome (ACS) occurs particularly frequently in cancer patients. 50 to 80 percent of patients are affected depending on the type of tumour. Cachexia not only reduces the quality of life, but is responsible for at least 20 percent of deaths among cancer patients and reduces the effectiveness of chemotherapy. The greatest risk of cachexia is with pancreatic and gastric tumours (80%). However 40% of patients with lung and prostate cancer are also affected [3].

The symptoms of tumour cachexia can have different degrees of severity. In the case of precachexia, there is a slight loss of weight, which is often not yet noticed by the person affected. The symptoms can develop into severe muscle wasting. Due to the loss of strength the patients lose increasingly their independence [6].

Cachexia also occurs as an accompanying symptom in other severe diseases that are accompanied by inflammation. Examples are [1]:

Criteria for the diagnosis of cachexia

Doctors speak of cachexia when other causes for the severe weight loss can be ruled out. Besides hunger, these include reduced absorption of nutrients from the gastrointestinal tract (malabsorption), hyperthyroidism, age-related muscle wasting and depression [1].

The main criterion for cachexia is severe, unwanted weight loss over a short period of time. This is defined as a loss of more than 5 percent of body weight within less than 3 months.

In addition, at least 3 of the following criteria are present:

What causes cachexia and anorexia?

In cachexia, inflammatory processes lead to disturbances in the body’s energy supply. Food intake is usually reduced, while energy consumption at rest (basal metabolic rate) is increased. This results in a negative energy balance, where more energy is consumed than supplied – with the result that patients lose weight.

Some causes of tumor cachexia:

How cachexia develops in HIV-infected people is less well researched. A study in an animal model showed that CD8+ T-cells play an important role in this. These immune cells normally kill infected cells, but also alter the fat tissue. This causes the fat reserves to break down. Future research should further decipher the connection between cancer, infections and cachexia in order to discover new methods of therapy [5].

Therapy of cachexia and anorexia

Because of many triggering factors, nutritional measures or medication alone are not sufficient to treat cachexia. The therapy therefore consists of many different measures [6] [7].

The endocannabinoid system (ECS) controls food intake, metabolism and energy balance of the body. The goal is to establish a balanced energy budget, i.e. a perfect so-called energy homeostasis. Tetrahydrocannabinol (THC), the psychotropic active substance of the cannabis plant, activates CB1 receptors. These are formed not only in the brain, but also in organs such as the gastrointestinal tract, liver, fatty tissue, muscles and pancreas. The CB2 receptor, on the other hand, is mainly located on immune cells and is stimulated by cannabidiol (CBD) [8] [10].

THC is responsible for the appetite-increasing effect. The active ingredient activates the body’s own reward system. This promotes the feel-good factor when eating. In 2015, scientists discovered that so-called proopiomelanocortin nerve cells (POMC cells) trigger this feeling of happiness. Normally, these cells produce a satiety hormone (alpha-melanocyte-stimulating hormone) after a good meal, which reduces hunger. In the presence of THC, however, these cells produce endorphins that increase the desire to eat, even when the person is full [9].

By binding to peripheral CB1 receptors in the stomach, a hunger hormone (ghrelin) is also produced. This increases the desire for particularly tasty, fatty or sweet foods. The maturation of fat cells is also promoted via cannabinoid receptors on the adipose tissue [8] [10].

Dronabinol: 38 percent of AIDS patients report an increase in appetite

Dronabinol, the synthetic form of THC, is approved in the USA for the treatment of anorexia and cachexia in HIV and AIDS patients. In a study from 1995, the effect on appetite and body weight was examined in 139 patients with cachexia due to AIDS, of whom 88 data sets were evaluated. The participants took dronabinol or a placebo.

The results show that 38 percent of those affected felt a substantial increase in appetite, compared to 8 percent who took a placebo. The mood also improved for 10 percent in the dronabinol group. 20 percent reported reduced nausea. In the participants taking a placebo, mood worsened and nausea improved only slightly. The body weight of the dronabinol patients remained unchanged, while those in the placebo group lost an average of 0.4 kilograms. Mild to moderate side effects occurred with dronabinol, including euphoria, dizziness and unhealthy thoughts.

The research team concluded that dronabinol is a safe and effective option for AIDS patients who have lost a massive amount of weight due to loss of appetite [11].

On the German market, there are no approved ready-to-use dronabinol medicines so far. However, doctors can prescribe dronabinol-containing prescription drugs [2].

Evidence for dronabinol on weight gain in HIV-infected individuals

In 2015, a research team conducted a meta-analysis of 79 randomised controlled trials on the use of cannabis-based medicines to increase appetite in HIV/AIDS patients and other diseases. Four of these studies, conducted between 1993 and 2003, dealt with the use of dronabinol to stimulate appetite. A total of 255 patients took part. In three of the studies, the researchers compared the effect with a placebo. One study compared the effect with Megastrol.

The research team found that dronabinol and medicinal cannabis flowers led to weight gain in HIV patients compared to a placebo. The study was weaker on appetite increase, increase in body fat percentage, reduction in nausea and improvement in functional status. However, in the study comparing dronabinol with Megastrol, THC was less effective. It also showed that a combination treatment of dronabinol with Megastrol did not lead to more weight gain.

The scientific team noted that the body of studies on the use of medicinal cannabis to stimulate appetite in HIV-infected people is currently thin. A further limitation is that the studies analysed had a high risk of systematic errors that could have biased the results [12].

In a pilot study from 2019, the effect of THC/CBD capsules on appetite was investigated in 17 male and female cancer patients with cachexia and anorexia. During the course of the study, six of the people discontinued treatment due to side effects or progression of the cancer. In total, 11 people completed the study. The researchers defined a treatment success as a weight gain of at least 10 percent of the starting weight.

All five people (100 percent) who were treated for 4.5 months reported an increase in appetite. Four people lost weight because their cancer got worse and required an adjustment of the tumour therapy – associated with side effects due to the chemotherapy. The remaining person’s weight remained stable.

The remaining six participants took the THC/CBD capsules for 6 months. Of these cancer patients, three achieved the therapy goal defined by the research team, i.e. a weight gain of at least 10 percent of their initial weight. One person even achieved a weight gain of 21.6 percent. Another person gained only slightly, while the body weight of two patients remained unchanged. Subjectively, however, five (83.3 percent) of the six patients reported an increase in appetite. In half (50 per cent) of these six people, pain was also reduced and sleep improved. In addition, the blood levels of the inflammatory marker TNF-alpha were reduced in four of the six patients. Adverse side effects reported included dizziness and anxiety.

The researchers came to the conclusion that the significance of the study is limited due to the many therapy discontinuations. However, in 3 of the 11 patients, a good success was achieved with an average weight gain of 17.6 percent. Therefore, a larger study with cannabinoid capsules is to be conducted in the future [13].

In a 2020 case report, medicinal cannabis improved cachexia due to diabetic neuropathy in a former heroin addict. The most common symptoms of diabetic neuropathic cachexia include weight loss, muscle wasting, loss of appetite and depressed mood.

Ten years after successfully quitting heroin use, the 62-year-old patient presented to start cannabis therapy due to chronic pain and severe muscle wasting. The antineuropathic drugs pregabalin and duloxetine were not sufficiently effective. The opioid painkiller tramadol caused severe dizziness. The patient reported a pain level of 6 to 7 on a visual analogue scale (VAS) of 1 to 10. In the past year, the patient lost weight from 84 kg to 59 kg.

After a comprehensive medical examination, cannabinoid therapy with a cannabis extract containing THC and CBD was initiated. Four months after starting treatment, the patient reported an improvement in appetite and gained 10 kg. Pain dropped to a VAS of 2. In addition, night sleep, leg weakness and mood improved. The positive effects were underpinned by an increase in the insulin dose. When building muscle mass, the body needs more insulin to absorb glucose into the cells. The patient denied questions regarding the potential for abuse. He gets by with one vial of cannabis oil for the whole month. The patient himself described the therapeutic success of THC as if he had discovered “a treasure”. His self-confidence returned [14].

Loss of appetite and emaciation is a major problem in seriously ill patients. Since the weakened body can no longer fight the disease well, treatment should be given as early as possible to stop or slow down the muscle atrophy. Since even experts do not yet completely understand what happens in the body during cachexia, the complex inflammatory processes should be researched further. This will help scientists develop new therapeutic approaches. Current studies show that tetrahydrocannabinol can be a good option. THC can help people with cancer or HIV infection to have more appetite and a better quality of life. As studies are scarce so far, larger studies are needed to further investigate the role of ECS in energy metabolism.